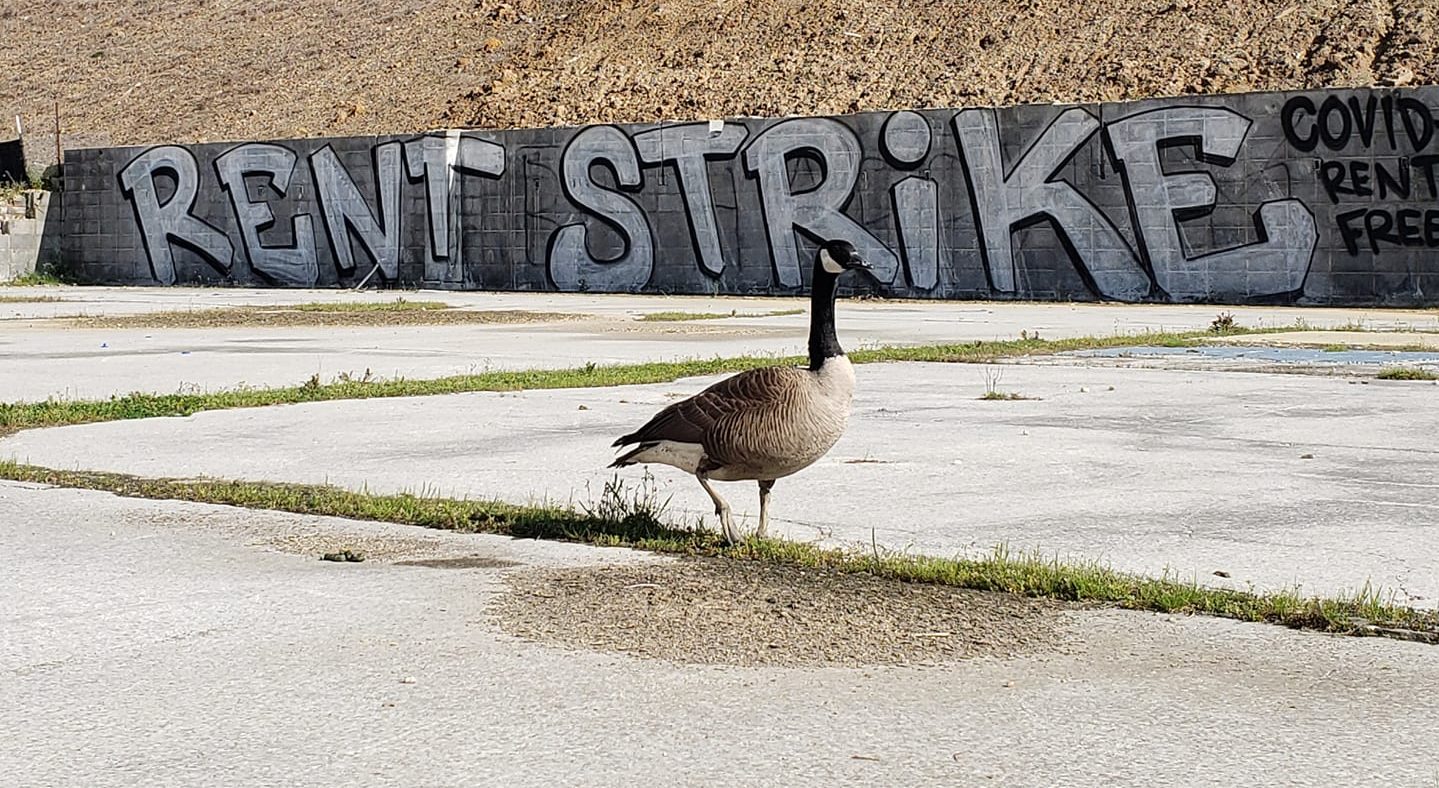 Rent Strikes And Beyond

Housing strategies that work for the South.

This is the second in a two-part report from Scalawag’s recent webinar, “Housing Security in the South during COVID-19.” Part one focuses on the context of the South’s affordable housing crisis.

On last week’s call in Scalawag’s Solidarity Over Distance series, organizers and legal advocates across the South were excited to share both immediate and long term strategies to address the housing realities in their states laid bare by the COVID-19 crisis.

Cooperating attorney for Fair Housing Center of Northern Alabama, Richard Rice, managed to speak optimistically of the moment. “We have a captive audience—and folks are ready for new ideas… The crisis is obviously severe… however, we do have an opportunity it presents as well to change things to change the dynamics on a fundamental level. Some of those things look like cooperative housing, community land trust, talking to folks who live in public housing about organizing tenant associations.”

Although the experts from last week’s call focused on other tactics, some tenants who are directly impacted by the economic fallout of the crisis are still pressing forward with the bold action not to pay their rent. Organizers advise that renters recognize their power in these situations, and see their action as a powerful bargaining tool in building solidarity with other tenants.

CantPayWontPayDURM is a network of striking tenants and homeowners in occupied Catawba, Occaneechi, Eno, Sappony, and Shakori lands in Durham that are growing radical solidarity to push back against the coming wave of evictions. Their aim is to build a groundswell of resistors that can pressure banks, cities, and landlords to cancel housing debts.

“In our local communities we lift up the organizing and mutual aid that has always existed and continues in response to crisis. The elimination of rent and mortgage payments is a necessary response to ensure the safety of all residents of Durham. In a progressive town that is deeply rooted in community we hope that preserving the housing and safety of existing residents and ensuring everybody has a home during the shelter-in-place order is a top priority,” the group’s press release states.

The idea behind this rent strike is that folks who can actually afford to pay their rent in April and May will partner with those who can’t—building up the collective power of withholding that Jane Place Neighborhood Sustainability Initiative program director, Breonne DeDecker, named as essential to any strike.

But an organized rent strike is just one piece in a constellation of critical efforts that will need to take place to affect change. CantPayWontPayDurm is not a nonprofit organization and cannot provide financial or legal aid to those needing immediate assistance. They believe the way forward is through renters and homeowners pulling together to become protective networks mobilized for action. This Sunday, April 12, tenants are organizing a socially-distant car parade in solidarity with those who can’t or won’t be paying rent in May.

Karimah Dilliard of Housing Justice League Atlanta says the only way out of the current crisis is to “organize our way out of this.” In addition to creating an eviction defense manual, organizers in Atlanta have created a COVID-19 crisis hotline, a FAQ sheet with eviction information, and a list of tips for how to organize your neighbors during social distancing. Collaboration with different victim services providers (i.e. domestic violence prevention, legal services for undocumented immigrants, harm reduction services) is also yielding dividends since many who are already vulnerable face a greater risk of housing insecurity during this time.

“We’re seeing the value of engaging other organizations in helping us to get the word out and helping people to organize themselves,” Dillard said.

DeDecker also mentioned that groups ranging from cultural organizers, to service workers, to musicians, to community land trusts are working together, putting the full force of their collective power behind calls for the governor to cancel housing debts during shelter-in-place and for public entities to use unrestricted funds for those in need.

Many people may be skeptical of organizing a community land trust, but in Louisiana, Jane Place Neighborhood Sustainability Initiative has been making strides as a land trust committed to building affordable housing. They also organize around reforming tenant laws to make it illegal for landlords to evict tenants only after five days of missed payment, which is the law in Louisiana.

According to Dillard, media organizations, organizers, and neighbors need to work together to tell the true narratives of community land trusts. The nation’s first land trust was formed in the late 1960s outside Albany, Georgia—a predominantly Black community now reeling from elevated numbers of COVID-19 cases.

Today, no community land trusts exist within the state. But all over the South these community-led groups are presenting sustainable solutions to local problems, from providing affordable housing in New Orleans, to tackling environmental pollution through bioremediation in North Birmingham, to growing community gardens to combat food apartheid.

Organizers in both New Orleans and Atlanta advise folks to go after the big bucks. In New Orleans, that’s the New Orleans Convention Center, which receives $150 million to $200 million in unrestricted funding through tourism, hotel, and restaurant taxes. Jane Place, arts and culture organizations, and local unions have come together to ask that $100 million be put aside for unemployment relief for artists and service and hospitality workers who are often tipped or paid under-the-table and therefore ineligible for other government assistance.

Some states like Kentucky charge a transient room tax for 30 days or less short term rentals. In Texas, a six percent hotel tax is another potential source of money for organizers to set their sights on. These are just some of the additional potential buckets of taxpayer money that folks in other states may be able to target for reallocation.

In Atlanta, targeting the big boys means going after the Belt Line and corporate housing developers. Dillard’s main point: become a public relations nightmare. Taking to social media to publicly shame landlords’ poor treatment of tenants in crisis is a great way to attack their image and credibility.

Renters are in a good position to bargain with landlords, despite limited official protections. Dillard, Gilbert, and Rice all agree. Housing Justice League Atlanta has created a letter that has been signed by several different victims’ services agencies that tenants can take to their landlords and ask for rent suspensions and reductions.

Richard Rice pointed out that the conditions under which folks may have signed their home rental lease agreement, business lease, or mortgage may no longer apply, given that the Stafford Act is in effect and several state governors have declared a state of emergency. While Peter Gilbert of Legal Aid NC is skeptical about the overall viability of citing force majeure as a reason not to pay your rent, there has been some legal precedent in subsidized housing under the concept of  “Good Cause for Eviction.” Before pursuing this strategy, however, Rice urges renters to get a copy of their lease and consult with a local attorney.

In the final remarks on the call, Rice brought up a startling point, “Martin Luther King Jr. basically said the purpose of direct action is to create a crisis which can then be leveraged to create change. We unfortunately have that crisis already… But in the midst of every crisis lies great opportunity if we seize it.”

Let’s seize it. We can’t afford to not.

*Editor’s note: The section on rent strikes was added after an insightful conversation with an attorney and Scalawag reader regarding the first installment of this report. It is always vital to include the folks directly impacted by conditions in the conversation and not to exclusively rely on advice from legal experts and professional organizers. Working class tenants are the experts on their situations and must lead out if movement efforts regarding housing security are to thrive.