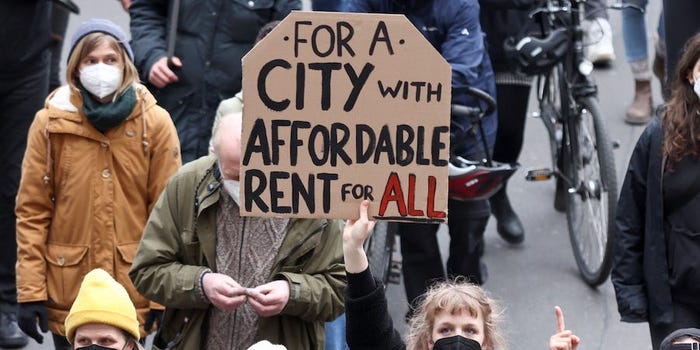 Like many cities around the world, rents in the German capital of Berlin have soared in recent years, doubling in the last decade alone.

But unlike many other cities, the people of Berlin are actually doing something about it.

First residents persuaded the local authorities to bring in a rent cap that instructed landlords to freeze rents at 2019 levels.

However, that was overturned by Germany’s federal court in April, which ruled the measures unconstitutional.

Now local campaigners are planning something even more radical: a bid to nationalize thousands of privately owned apartments in the city.

Specifically, campaigners want the government to take apartments from real estate firms that own more than 3,000 apartments, place them into public ownership, and rent them out at more affordable rates.

The estimated market value of the real estate in question is up to €36 billion ($44 billion), CityMonitor reported, but the group has suggested compensation of as little as €8 billion ($10 billion), arguing that the prices are based on speculation and overpriced rental yields rather than real value.

“The housing market in Berlin seems like paradise if you’ve lived in London or Paris,” Jonas Becker, a 30-year-old academic who lives in the German capital, told Insider.

“The housing market in Paris is absurd because you can’t find any affordable housing. But that’s an evolution we see in Berlin as well. The rising rents don’t correspond anymore to wages, and that’s something we want to address.”

Becker is a spokesman for a group of housing activists called “Expropriate Deutsche Wohnen & Co,” referring to the city’s biggest real estate group.

The group says the compensation would be provided to landlords gradually using the rents, rather than costing the taxpayer.

Berliners are rising up for fairer rents

The idea is certainly very radical, but it is gathering plenty of support from Berliners.

In a city where around 85% of residents live in rented accommodation, and where more than 200,000 publicly owned apartments have been sold off since 1990 to private equity firms and hedge funds, the issue has taken on acute significance.

“For my generation, it’s nearly impossible to own a building or an apartment — something that has been very possible for our parents,” said Becker. “We will probably rent our whole lives.”

He said that many Berlin residents, especially younger ones, were radicalized by the German federal court’s decision to overturn the rent cap last year, which prompted thousands of people to march through the streets, banging pots and pans in protest. Many landlords are now charging their tenants more than they were before the rent cap, in order to make up for lost income.

The group wants to collect 240,000 signatures by the end of June, which would be enough to force a referendum on the subject. There is also a strong chance that the referendum could pass, forcing lawmakers to consider the plan: A poll carried out in April indicated that 47% of Berlin residents supported the proposal, with 43% opposed and 9% undecided.

However, even if the referendum is successful it will be a struggle to actually get the plan into legislation. Die Linke, the left-wing party with 69 seats of 709 in Germany’s parliament, is the only one to have offered the proposals formal support, Deutsche Welle reported. Germany’s dominant conservative parties have been quick to condemn the proposals.

Nonetheless, Becker said that even talk of a referendum has pushed radical solutions for Berlin’s rental problems into mainstream dialogue. “Many people now consider us a real opponent they have to deal with, not as left-wing radicals who want a revolution. That’s not what we want to do,” he said.