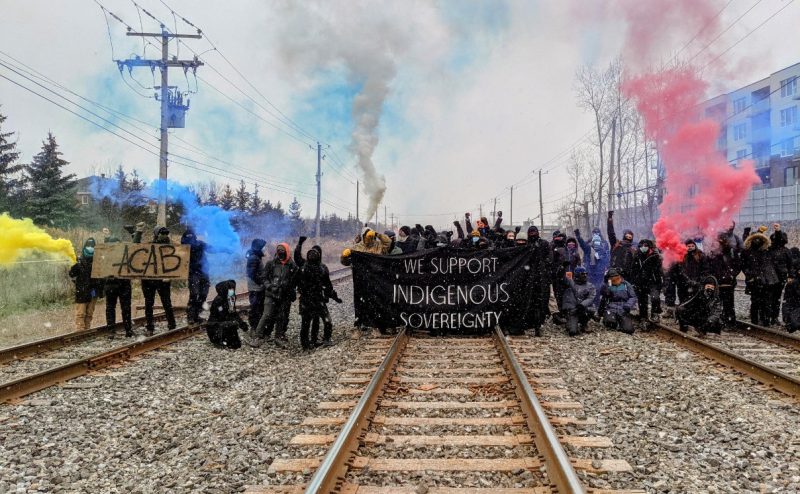 Report-Back From A Rail Blockade In Saint-Lambert

Report on recent blockade in solidarity with Wet’suwet’en land defenders.

On Saturday, more than sixty people acting in solidarity with Wet’suwet’en land defenders blocked the CN main line in Saint-Lambert south of Montreal for over six hours. It was the longest rail blockade in Quebec since the winter of 2020, interrupting Via Rail service and immobilizing six freight trains. These notes reflect the experience of a couple participants in Saturday’s blockade.

Nostalgia mixed with anticipation as we arrived at the tracks where they cross rue Saint-Georges, with banners ready to hang across the rail crossing and no police in sight. It was a bright morning, temperatures just below freezing and the ground snowless, a contrast with that first night in February 2020, when temperatures sunk to 25 below and snow could be piled into mounds atop the rails.

On Wet’suwet’en territory, 4000km to the west, land defenders continue to fight the construction of the Coastal GasLink pipeline. Weeks after raids on the Gidimt’en Checkpoint and Coyote Camp saw 30 arrests, calls to come to the Yintah have been renewed and supporters already refuse to accept the latest invasion as defeat, setting fires on roads and blocking CGL work. Their actions inspire ours.

The Police Want A Dialogue

The Service de police de l’agglomération de Longueuil (SPAL) counts 546 officers and has jurisdiction over the fifth largest city in Quebec by population, of which Saint-Lambert is part. Fady Dagher, chief of the SPAL since 2017, has made the news for “trying to change the face of policing” in the south shore suburb. His efforts have been described as “humanizing” and even “revolutionizing” the police. The SPAL recently received $3.6 million from the Quebec government for developing a “police de concertation,” through training programs that focus on prevention, a better understanding of social issues, and constructive dialogue.

St-Lambert blockade is initiated by anti-colonial settlers in solidarity with Indigenous peoples defending their territories against colonial violence and destruction. Enviro movements must support Indigenous struggles for land and sovereignty! #ShutDownCanada #AllOutForWedzinKwa pic.twitter.com/KfXbudxBQ7

What does this have to do with our rail blockade? While on the Island of Montreal, we would have had SPVM holding tear gas launchers and threatening us somewhere within the first hour, we were instead greeted by unarmed negotiators telling us they respected what we were doing and that, furthermore, a city bus had been commissioned and brought to the rail blockade to allow us a place to warm up. While the offer was declined and it became obvious that the negotiators’ real mission was intelligence-gathering, the light police presence (and music!) allowed the mood to stay cheerful and gave people time to set up dozens of small barricades along a 500-m stretch of the train tracks with railroad ties and tree branches, which would take CN workers time to clear once we left. The thin line of police even retreated off the railway when the crowd advanced on them and demanded they return to the sidewalk.

The masks fell at lunchtime. Two kind comrades had arrived with a box of samosas, but the police were denying them entry to the train tracks, cutting them off from the blockaders. Our complaints did not sway the dozen cops present, so a team exited the tracks to escort the comrades and their food offerings into the blockade. That is when an employee of the SPAL tackled a blockader to the ground, choking him and punching him in the head. Demonstrators quickly surrounded the cop, de-arrested the comrade, and pushed the cop back. Though some samosas had fallen onto the street during the melée, all were recovered, and the box was carried onto the railway, where all comrades regrouped safely and the blockade continued. Those were without a doubt the best-tasting samosas we can remember.

The sky clouded over, and snow was falling by early afternoon. A handful of SPAL reinforcements arrived. Journalists climbed the ridge on one side of the tracks to get pictures from a different angle. Half an hour or so after lunch, the police liaison officers re-entered the blockade to inform us that we were committing a crime and breaking federal rail safety laws. They said the Sûreté du Québec (provincial police) were on their way. Chants of “Shut Down Canada” drowned out some of their words; cheers went up when they informed us that six freight trains were stalled. We watched trains come to a halt and retreat into the train yard to the south of us throughout the day, but we weren’t counting. The blockade went on.

Around 3pm, it was clear that our numbers would soon be dropping, while the police would soon have better-equipped reinforcements. With the tracks still barricaded and requiring careful inspection, we left in a demo into the town of Saint-Lambert. SPAL cruisers followed closely, trying to drive through the crowd at least twice. We reached Victoria avenue, the main commercial street of Saint-Lambert, which is where we would disperse.

The rails in St-Lambert are once again blocked in response to the call by #Wetsuweten to #ShutDownCanada. We are determined to block economic infrastructure of the colonial state against the invasion of Indigenous land by CGL and the RCMP. pic.twitter.com/krpW4wbLjf

The violence that police would soon target us with does not compare to the violence of being removed from your land by RCMP pointing assault rifles at you, but we think it is still important to document. Shortly after the demonstration was no longer a cohesive group holding the street, cops began several chases targeting individuals they believed to have taken part. Four violent arrests were witnessed in the area of the dispersal, in each case the person targeted was significantly outnumbered by cops. A SPAL officer tasered one person prior to arresting them.

In the future, we hope we can be inventive and unpredictable in our dispersals and come into actions with several possible departure plans that account for different levels of escalation that may occur during the action. Recently in Quebec City, a rail blockade left in a demo along the tracks, exited through a hole in a fence next to a university campus and was immediately able to blend into crowds of students.

Despite the arrests, we left with renewed confidence in our capacity to hold down a blockade for longer than an hour or two and energized for upcoming solidarity actions. We’re impressed by how we collectively handled the different forms of police pressure we faced and refused to play the cops’ game of “dialogue”.