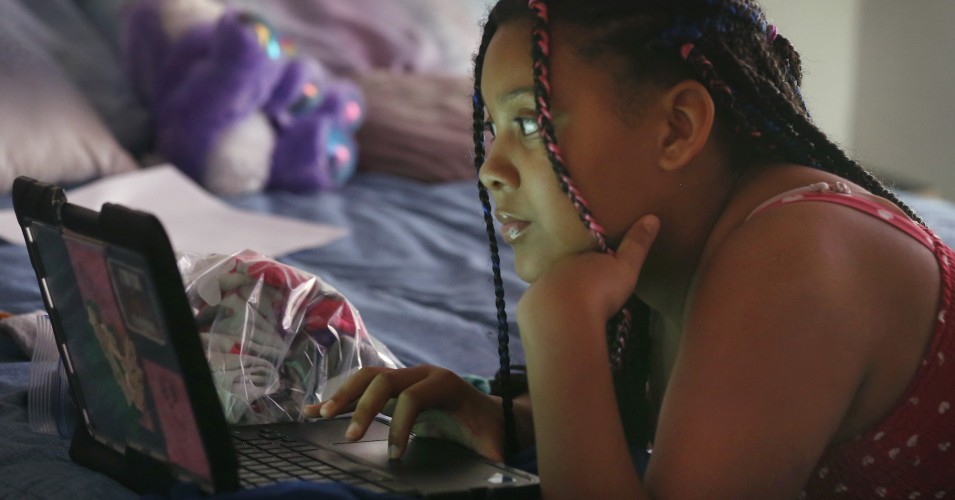 Above photo: Alayjah Burnett, 12, attends an online class at her home in Vallejo, California on Thursday, April 23, 2020. Alayjah’s mother Michelle Burnett was denied time off to pick up a laptop from her sister, Namarhianna’s, school so she could participate in distance learning. Then the employer terminated Burnett because she asked for an explanation as to why she was denied the time off per the Families First Coronavirus Relief Act. Burnett was told she fit one of the employer exemptions in the law. Paul Chinn/The San Francisco Chronicle via Getty Images.

‘Price Too High and Rising.’

“The steep price of a high-speed connection is the primary barrier—a hard truth that flies in the face of the wild claims broadband-industry lobbyists make about prices getting better for internet users.”

As federal lawmakers held a hearing Thursday on broadband equity, a new report details how the internet service provider industry, through hiked prices and disappearing lower-priced offerings, is exacerbating the digital divide.

Entitled Price Too High and Rising: The Facts About America’s Broadband Affordability Gap, the publication (pdf) from Free Press states that “the central fact is Americans pay too much for the internet.”

“By the start of 2020, nearly 80 million people still did not have adequate internet at home,” according to report author and Free Press research director S. Derek Turner. “Black, Latinx, and Indigenous people comprise a disproportionate number of those who are disconnected.”

“The steep price of a high-speed connection is the primary barrier—a hard truth that flies in the face of the wild claims broadband-industry lobbyists make about prices getting better for internet users,” the report states.

We’re tuning in to today’s #SubCommTech hearing on the #DigitalDivide and are already hearing a lot of ISP talking points. Here’s the truth about the affordability gap in the U.S. broadband market: https://t.co/wARk0kjk3i pic.twitter.com/LQ49cIAOP2

Part of the problem, according to the report, is that “the broadband market is a complicated maze for users, with a myriad of promotional and non-promotional prices, hidden fees, and constant price hikes excused by carriers as ‘value enhancements.'”

Looking at broadband prices over past several years, for “consumers, the results are not good: no matter how you look at it, broadband prices continue to rise far faster than the rate of inflation. Furthermore,” the report continues, “the lower-priced tiers that are attractive to newcomers to the market and lower-income families are disappearing.”

In fact, federal data shows that U.S. households’ monthly spending for internet access increased at four times the rate of general inflation between 2016 and 2019, a time span during which former President Donald Trump picked Ajit Pai to chair the Federal Communications Commission. Such an increase in prices, as the report notes, can prove an “insurmountable” barrier to broadband access for some families living paycheck to paycheck.

“The pandemic has only exacerbated this problem—for families, certainly not for ISPs,” the report states, pointing to “a banner year” for broadband companies, who enjoyed “record customer and revenue growth.”

Unlike its devastating impact on most of the rest of the economy, Covid-19 has actually been a boon for Comcast’s broadband business. Last year, Comcast enjoyed its largest-ever single year growth in residential high-speed internet customers and revenues. And its cable segment operating profit margin jumped significantly to 42.1%, despite continued declines in its traditional cable TV business.

What’s more, while ISPs are imposing rate increases on customers, they are reducing their capital investments.

AT&T and Comcast, the report says, had “substantial declines” in such investment over past four years.

And for households just trying to get online, it’s getting pricier to do so.

According to the report, “The FCC’s Urban Rate Survey data indicate that the non-promotional rates for lower-priced stand-alone broadband tiers… rose 20% between 2015 and 2020, more than double the rate of inflation.” Some ISPs are just eliminating budget offerings altogether.

“Cable and telecom lobbyists are eager to distract lawmakers from the fact that people are on average paying more out of pocket for internet service,” the report states. “Reading the fine print shows how the industry is spinning a few data points together to tell this misleading tale.”

However, the publication adds, “the spin can’t mask the facts.”

“The Trump era is over,” Turner said in a statement. “It’s time to move past the fact-free policy debates that have plagued our discourse for far too long. Progress requires listening, analysis, and courageous leadership. But that progress won’t come if we’re not all operating from the same set of facts.”

“A lack of access further exacerbates the economic plight and equity issues we face as a nation.”
—Chris Lewis, Public KnowledgeFree Press’s report came the same day a House panel held a hearing on broadband equity.

The hearing included testimony from Public Knowledge president and CEO Chris Lewis, who stressed (pdf) the importance of closing the digital divide and said the “pandemic has brought into clear focus just how essential” broadband is.

“The cost of broadband, a lack of devices and digital skills, and a pervasive problem of broadband providers investing less in broadband infrastructure in low-income and marginalized communities are to blame for this disparity. These inequities cannot remain,” Lewis said.

He pointed to “concrete steps” for Congress to take to address the problem, including ensuring the FCC collects broadband price information; passing the Community Broadband Act; ensuring a long-term broadband subsidy for low-icome households; requiring ISPs to have a budget option; and banning ISPs from engaging in so-called “digital redlining.”

“Broadband represents economic opportunity, educational opportunity, and the opportunity for better health and civic engagement,” he said. “A lack of access further exacerbates the economic plight and equity issues we face as a nation.”

“Congress must come together to ensure universal affordable access to high-speed reliable broadband for everyone,” said Lewis.