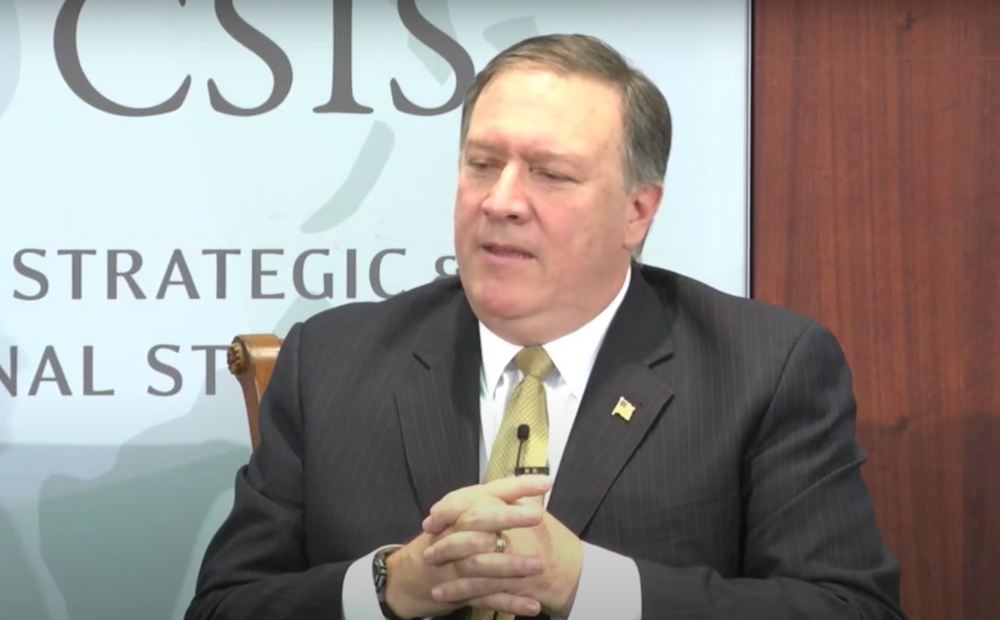 Above Photo: Screen shot from the Center for Strategic and International Studies (CSIS) event, where CIA Director Mike Pompeo singled out WikiLeaks.

NOTE: Show your support for Julian Assange by sending in a brief video statement. Click here for details.

Shows Clearest Evidence Yet Of Improper Pressure On Prosecutors.

The district judge who denied the extradition request previously dismissed evidence of improper pressure from the CIA to charge the WikiLeaks founder.

Though District Judge Vanessa Baraitser ruled against the United States’ extradition request, she rejected the argument from the legal team for WikiLeaks founder Julian Assange that hostility within U.S. intelligence agencies “translated into improper pressure on federal prosecutors to bring charges.”

However, a Yahoo! News report on the CIA’s plans to kidnap or kill Assange contains some of the strongest evidence yet that Assange was only charged with crimes because of their thirst for vengeance.

Assange was charged by the U.S. Justice Department with 17 counts of violating the Espionage Act and one count of conspiracy to commit a computer intrusion that, as alleged in the indictment, is written like an Espionage Act offense.

The charges criminalize the act of merely receiving classified information, as well as the publication of state secrets from the U.S. government. It targets common practices in journalism, which is why the case is widely opposed by press freedom organizations throughout the world.

Assange is detained at Belmarsh, a high-security prison in London where he has been held since he was expelled from the Ecuador embassy in April 2019 and denied bail.

CIA Director Mike Pompeo obsessed over Assange and WikiLeaks, and sought revenge after the publication of “Vault 7” materials, redefining the media organization as a “hostile entity.” (His successor, Gina Haspel, shared his zeal for retaliation.)

Pompeo proposed kidnapping Assange in the summer of 2017. His obsession led several CIA officials to draw up plans for assassinating the publisher.

“Some National Security Council officials” in President Donald Trump’s administration “worried that the CIA’s proposals to kidnap Assange would not only be illegal but also might jeopardize the prosecution of the WikiLeaks founder,” according to the report. “Concerned the CIA’s plans would derail a potential criminal case, the Justice Department expedited the drafting of charges against Assange to ensure that they were in place if he were brought to the United States.”

Discussions about putting Assange on a rendition flight alarmed senior administration officials, like John Eisenberg, who was the top lawyer for the National Security Council, and his deputy, Michael Ellis.

“Pompeo [was] advocating things that are not likely to be legal,” including “rendition-type activity,” one former national security official told Yahoo! News reporters.

The Justice Department had yet to indict Assange, “even under seal.” If the CIA kidnapped Assange from the Ecuador embassy, they would be doing so without any “legal basis to try him in the United States.”

Meetings involving the CIA, where plans for kidnapping or killing Assange were raised, put pressure on prosecutors at the Justice Department.

“Eisenberg urged Justice Department officials to accelerate their drafting of charges against Assange, in case the CIA’s rendition plans moved forward, according to former officials. The White House told Attorney General Jeff Sessions that if prosecutors had grounds to indict Assange they should hurry up and do so, according to a former senior administration official.”

The British government held Assange on a “bail-jumping charge” after the Swedish prosecution authority dropped their preliminary investigation into alleged sexual acts.

On December 21, 2017, an indictment against Assange was filed under seal for allegedly conspiring to commit a computer crime.

Representatives of the Assange legal team were asked to comment but declined.

Attorneys for Assange did not have any of the above details from internal discussions. However they had enough evidence from Pompeo’s first public remarks and the spying operation by Undercover Global against the Ecuador embassy to single out the undue influence on the Justice Department.

“Pressure was placed on career prosecutors by political appointees,” like Pompeo and Attorney General Jeff Sessions.

“This was part of a concerted plan by the executive, first to handicap his legal defense through the targeting of his lawyers, and to have him indicted, expelled from the embassy, and extradited; and further to ensure the escalation of the charges against him in the two superseding indictments,” his legal team added.

In November 2018, the New York Times reported that the April 2017 speech by Pompeo and “other efforts were intended in part to pressure the Justice Department to intensify [their] reassessment of Assange.”Baraitser was not troubled by the hostility among U.S. intelligence agencies. “Although the intelligence community has spoken in hostile terms about Mr. Assange and Wikileaks, this is unsurprising given that he disclosed a vast number of their classified documents.” She added, “The intelligence community does not speak on behalf of the president or his administration.”

The defense submits that Mike Pompeo was leading the pursuit of this prosecution. They rely in particular on a speech from 13 April 2017 during which he described Wikileaks as a “non-state hostile intelligence agency” and stated, “we have to recognize that we can no longer allow Assange and his colleagues the latitude to use free speech values against us. To give them the space to crush us with misappropriated secrets is a perversion of what our great Constitution stands for. It ends now”. However, at this time Mr. Pompeo was Director of the Central Intelligence Agency (“the CIA”). After his appointment to Secretary of State in April 2018 there are no reports of hostile comments made in relation to Mr. Assange or to Wikileaks. [emphasis added]

The Yahoo! News report highlighted the intense debate within the Justice Department, FBI, and CIA in 2015. The FBI believed WikiLeaks should be their sole responsibility. The bureau did not think the CIA or NSA should be involved.

“The Justice Department, in particular, was ‘very protective’ of its authorities over whether to charge Assange and whether to treat WikiLeaks ‘like a media outlet,’ said Robert Litt, the intelligence community’s senior lawyer during the Obama administration.”

Because the Trump White House did not have the same hangups over “First Amendment issues,” the pressure to charge Assange was substantial. This was reflected in disagreements among career prosecutors, which the Washington Post covered the same month that Espionage Act charges were made public.

Still, Baraitser insisted, “I have been given no reason to consider that the U.S. criminal justice system in general or the judge designated to hear this case in particular, will be manipulated for political purposes at the behest of the executive or the CIA.”

Pompeo was asked about the Yahoo! News report by Megyn Kelly and replied by urging the Justice Department to launch mass prosecutions against the sources for the article.”I can’t say much about this other than whoever those 30 people who allegedly spoke to one of these [Yahoo News] reporters — they should all be prosecuted for speaking about classified activity inside the Central Intelligence Agency.”

Based on the revelations, press freedom groups renewed their opposition to the political case.

“The CIA is a disgrace. The fact that it contemplated and engaged in so many illegal acts against WikiLeaks, its associates, and even other award-winning journalists is an outright scandal that should be investigated by Congress and the Justice Department,” stated Freedom of the Press Foundation executive director Trevor Timm, who testified at Assange’s extradition hearing.“[President Joe Biden’s administration] must drop [their] charges against Assange immediately. The case already threatens the rights of countless reporters. These new revelations, which involve a shocking disregard of the law, are truly beyond the pale.”

Rebecca Vincent, the director of international campaigns for Reporters Without Borders, reacted, “If true, these allegations of a CIA threat to Assange’s life are alarming, and underscore the very serious risk he remains at in detention, which would be exponentially heightened if the U.S. is successful in securing his extradition.”

“The exposed alleged plots that could cause severe harm or loss of life to Assange or his associates are threats to press freedom itself. The Biden administration must act immediately to distance itself from these shocking reports of the Trump administration’s actions, close the case against Assange once and for all, and allow for his release from prison before any further harm is caused.”