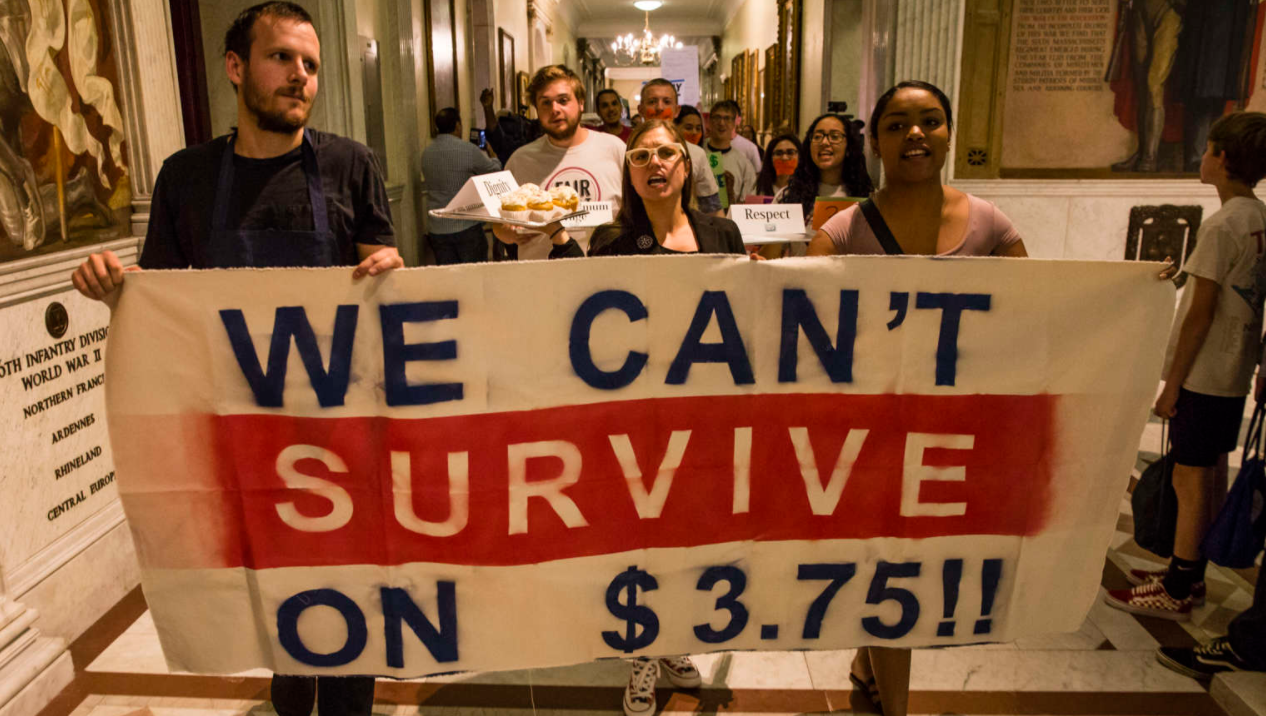 Above photo: Servers and other hospitality workers that rely on tips for income take part in a rally at the Massachusetts State House in Boston to convince lawmakers to raise the $3.75 minimum wage for restaurant workers on June 12, 2018. Keith Bedford/The Boston Globe via Getty Images.

Following the passage of stimulus packages with aid for workers like expanded unemployment benefits, politicians and business owners have wrung their hands over a supposed worker shortage as people refuse to return to work, as they say. A new report pushes back on that narrative and shows that actually, it’s more likely low wages offered by businesses that are causing workers to want to quit.

The report by One Fair Wage finds that 53 percent of restaurant workers have considered leaving their jobs during the pandemic, and 76 percent of restaurant workers cite low wages and tips as the reason for leaving the industry. Being paid a low wage was the most common reason for leaving by far; COVID-19 concerns were the next highest reason, with 55 percent of workers saying they were concerned about pandemic safety.

The survey of over 2,800 food service workers also found that, overwhelmingly, a “full, stable, livable wage,” would compel workers to stay at their jobs; 78 percent of respondents said as such. This was the top reason for workers to stay by nearly 30 percentage points. The next top reason — at 49 percent — was if they received paid sick leave.

Conditions have been particularly tough for women, especially women of color and mothers. Working mothers face a double whammy, often bearing most of the responsibility for taking care of children while making lower wages.

A report from One Fair Wage from March found that women are not only more likely to be tipped less but are also more likely to face harassment on the job. Along with the pandemic, relying on tips has created, in some cases, hostile conditions for female tipped workers.

Wednesday’s report shows that low pay across the industry could be responsible for why nearly 40 percent of restaurant companies are having trouble finding workers.

Meanwhile, some lawmakers have been using the supposed worker shortage as justification to end supplemental unemployment benefits that were in place for the pandemic. Montana Republican Gov. Greg Gianforte said on Tuesday that his state would no longer give unemployed workers the extra $300 a week given to them through the last stimulus package.

Studies have shown that receiving expanded unemployment benefits, however, are not keeping people from working. One Yale study from last year found the opposite to be true: Those who were receiving the extra unemployment checks, which were $600 then, were actually quicker to return to work rather than slower.

Still, Republicans and centrists wrung their hands over the unemployment benefits issue all year. It was partially thanks to Sen. Joe Manchin (D-West Virginia) that the unemployment checks were smaller in the latest round of stimulus proposals. Manchin is also infamously against a $15 federal minimum wage.

Meanwhile, progressives argue that higher wages would help unemployed people get back to work and working people get paid a more livable wage.

One Fair Wage’s Jayaraman advocates for an “equal and just wage” as “the only way to put our nation back on the road to economic recovery and to ensure that the women and mothers who have borne the brunt of the COVID-19 crisis can remain in the workforce.”

The organization was also previously supportive of Sen. Bernie Sanders’s (I-Vermont) Raise the Wage Act, which would have raised the federal minimum wage to $15 and eliminated the subminimum wage for tipped workers. The current federal hourly minimum for tipped workers is just $2.13 — far from a livable wage.