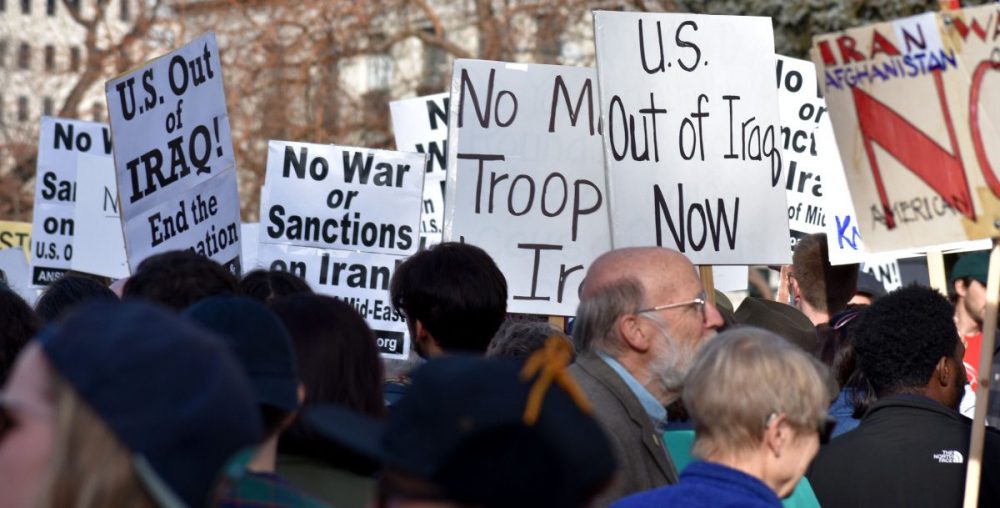 Report From Mobilization Against War On Iran In Denver

Denver, CO – As war approaches, I feel a need to write every day… not long complex analyses, just elaborations on one point that I’ll try to keep less than 1000 words, admittedly a challenge. No doubt I am writing as much for myself as those who read this. I’m trying to figure out both what is going on – how close to a regional war have we come, and to assess the global movement against a U.S. attack against Iran.

Today I want to give some thoughts on the national anti-war demonstrations – some 75, 80 cities mobilized in two days – all over the country through what I saw in Denver.

Funny how Nancy and I can look at the same situation and have such different takes. She was disappointed with the turn out, I was quite satisfied. She would have liked to have seen it three, four times as big. I suppose I would have too, but while crowd estimates are not my strong point I do believe there were better than five hundred people who showed up on two day’s notice. A whole coalition of forces had come together overnight, some old some new. I wasn’t able to hear all the sponsors but it was a wide variety. The speeches were excellent – solid anti-imperialist militant stuff – on the mark and the young activists who spoke really knew their stuff and the ones I heard were very articulate and no-nonsense.

Something new is in the air… angry, militant, controlled, politically savvy and anti-war to its very core. Unafraid. I would not be surprised if the tone is any different anywhere else in the country. It probably helps that the maniac/moron/gangster Trump is the President.

They knew of what they spoke… bipartisan treachery, the lies being fed by the media like in 2003 before the Iraq invasion… the very rapacious nature of U.S. Middle East policy…and a genuine sympathy towards the Iranian people for the loss of their extraordinarily talented military leader, Qassim Suleimani. Main points were 1. nothing can justify a war against Iran 2. the U.S. should withdraw its troops from Iraq.. 3. How Trump announced a troop pullout from Syria at the same time there is actually a 14,000 troop build up through the Middle East.

These were the themes that dominated both the speeches, banners and posters.

More important that was the age spread. This was a youth-dominated event. This is a youth-led peace movement with a strong openly socialist component. By “youth” , again I am somewhat vague and uncertain but my sense was that most were under the age of 35. And while I couldn’t tell for sure, I had the distinct impression that that these youths – their futures in jeopardy from both climate change and nuclear war – are starting out far more militant than some of the previous episodes of peace movement building.

Of course there were some of “old timers” people who had demonstrated for peace and against U.S. foreign intervention since the 1960s, Nancy and I among them. My birdwatcher friend Henry Feldman, Pat McCormick of the Sisters’ of Loretto, Eric and Judy Danielson – Quakers with a lifetime of peace work behind them for the American Friends Service Committee, Jonathan Moyer from Korbel, Arnie Carter from the Oscar Romero Troop greeted us as did several people we had worked with in the Colorado Campaign for Middle East Peace and Priority Peace.

Tay Anderson, our newly elected Denver School Board member was also present. Nancy went up to him to say hello.

Among the presidential candidate signs were only two – some signs for Bernie Sanders and several for Tulsi Gabbard.  There were no signs of Michael Bennet, Joe Biden or Pete Buttigieg’s supporters, nor those (few) gathering behind Michael Bloomberg’s presidential bid. One Trump supporter was present. He literally wrapped in a Trump banner weaved his way through the crowd, it seemed to me more to provoke the protesters present than to demonstrate against war himself. He was ignored.

But it was the new, young faces of the relative newcomers on the scene, from Democratic Socialists of America and the Party for Socialism and Liberation who spearheaded today’s events.