Report: How Many Environmental Activists Were Killed Last Year

Above photo: Marivic “Tarsila” Danyan overlooks coffee plantations near her village of Tabasco in the Philippines. Her father protested a coffee plantation linked to one of the country’s most powerful families. In 2017, he was killed, along with Danyan’s husband and two brothers. Thom Pierce/Guardian/Global Witness/UN Environment.

The year 2019 was the most dangerous on record for environmental activists, a new report says.

Every day around the world, people stand up to companies exploiting land for profit, felling trees, damming and polluting waterways, displacing ancestral homes and destroying wildlife habitats. Every week, an average of four of these defenders are killed.

The Global Witness Defending Tomorrow report, released Tuesday, counted 212 people killed last year for their efforts to protect the Earth from the destructive effects of development for oil and gas, mineral extraction, agriculture, logging and other practices.

“Our figures are almost certainly an underestimate,” the authors write, and they don’t include people who were attacked, intimidated, unjustly imprisoned or otherwise silenced for protesting industrial encroachment on nature and ancestral lands. “Our data on killings will never accurately capture the true scale of the problem.”

The violence is especially high against Indigenous people, who accounted for 40% of land defenders killed in 2019, Global Witness found, though they make up only about 5% of the world’s population.

The impacts on Indigenous populations around the world are starkly disproportionate, said Chris Madden, lead author on the Global Witness report.

“On the flip side, there is the growing recognition that to be able to deal with the climate crisis we must listen to Indigenous people and we must protect their way of life to protect vital climate-critical forests and ecosystems that are essential to fend off the climate crisis.”

Indigenous people are exceptionally effective stewards of nature. Deforestation is twice as high in non-Native-managed territories. Indigenous lands comprise less than 20% of the Earth and 80% of its biodiversity, according to the United Nations Permanent Forum on Indigenous Issues. But Indigenous communities legally own a mere tenth of the lands they claim. Even where their land rights are recognized, roads, dams, pipelines and industrial operations are often carried out without their informed consent, leading to displacement, relocation, forced removal or worse.

Violence against activists is greatest in Central and South America — and getting worse. In Honduras, 14 environmental defenders were killed last year, more than triple the year before, making it the most dangerous country per capita. Colombia topped the Global Witness list with 64 deaths recorded in 2019, two and a half times the number a year earlier. Half were of Indigenous people.

Indigenous human rights defenders in Colombia increasingly have been targeted by violence and harassment since a 2016 peace agreement between the government and FARC rebels left formerly FARC-controlled regions open to competition between armed criminal and paramilitary groups.

The peace agreement in Colombia was also supposed to help tens of thousands of farmers transition from illegal coca cultivation to growing cacao and coffee. But the program has been ineffective, and participants are being targeted by criminal and militia groups with vested interest in the continuation of the drug trade.

The Global Witness report counted some 33 people killed defending the Amazon, a vital but threatened repository for atmospheric carbon. Escalating deforestation from logging, mining, fires (natural and manmade) and agriculture — actions supported and encouraged by Brazil’s far-right president, Jair Bolsonaro — threaten the forest, Indigenous people who live there, and the global climate. In November, 26-year-old Paulo Paulino Guajajara was ambushed and fatally shot by a group of illegal loggers in his people’s territory. He was a member of one of Brazil’s grassroots groups called Guardians of the Forest.

The struggles of the Indigenous communities against destructive development is an existential issue, said María Martín Quintana, advocacy coordinator for the Mesoamerican Initiative of Women Human Rights Defenders (IM-Defensoras), impacting “their ways of life and the survival of life in their territories.” Violence is also “classist, racist and misogynist,” she added. 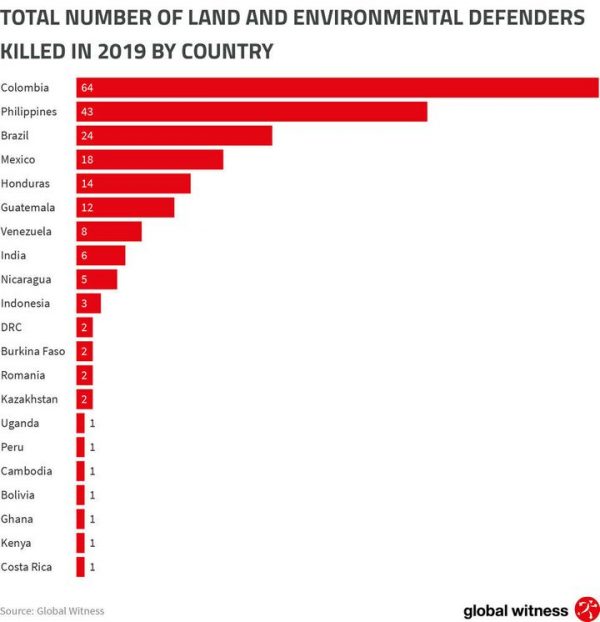 Women are increasingly at risk of murder, harassment, imprisonment and sexual violence in Latin America. Killings of women human rights defenders in Colombia rose nearly 50% in 2019 over the year before, a U.N. human rights council report found. In Mexico and Central America, attacks against female activists — especially those defending land, water and natural resources — doubled between 2015 and 2018, according to IM-Defensoras.

In December, and in part due to pressure from Global Witness to investigate, seven people were sentenced for the 2016 murder of Honduran activist Berta Cáceres. Cáceres was shot dead in her home after helping stop the building of a major hydroelectric dam that would have flooded land inhabited by the Indigenous Lenca people.

Many of the people killed in South and Central America were fighting the mining of coal, copper, gold and other materials, which degrades soil, pollutes water systems, fuels deforestation and forces people out of their homes. As in years past, mining is responsible for the greatest number of defender deaths recorded in the Global Witness report.

But industrial cultivation — of products such as palm oil (which is in half of what you buy at the drug store and supermarket and destroys forests), soy, sugar, coffee and tropical fruits — is an increasing threat. Deaths associated with agriculture were up more than 60% in the last year, to a total of 34. Most of these were in Asia, concentrated mainly in the Philippines, where land rights are sketchy, and where human rights advocates are “red-tagged” as terrorists by the government.

Last spring and summer, amid escalating violence between the government and militant communist insurgents, more than a dozen small-scale farmers, as well as human rights lawyers and others, were killed in conflicts related to the massive sugar plantations on the island of Negros.

A Global Witness investigation last year uncovered suppliers for major international food brands who had run people off their land — threatening them and burning their houses to the ground — in order to plant bananas and pineapples.

In its defenders report, Global Witness called on companies and their investors to take responsibility for harm to land and environmental defenders along the length of their supply chains, up through operations and investments.

“The numbers are rising and clearly there’s a failure in responses from both governments and businesses,” said Madden.

The report looked not just at the violent submission of environmental activism, but also subtler methods for quashing opposition, such as legal snares meant to quell peaceful protest.

In South Dakota, penalties for inciting riots, knocked down by a federal judge last year for apparently targeting opponents of the Keystone XL pipeline, were passed into law this March.

In a troubling first, a trio of U.K. protesters who locked themselves to the entrance of a fracking site were convicted of breaching an injunction obtained by the shale gas company Cuadrilla to bar trespassers. (The ruling came down in June of last year; their sentences were suspended in September.)

In Canada, a court injunction barred members of the Wet’suwet’en First Nation Indigenous group from protesting at the proposed construction site of a gas pipeline on their own land. More than a dozen people were arrested. Officers were authorized to use lethal force, The Guardian reported.

In the months since the report was compiled, the pandemic has provided cover and an excuse for anti-environmental policy around the world. In Brazil and Cambodia, there has been a marked uptick in logging, Madden noted. Meanwhile in the U.S., President Donald Trump’s administration, which has been systematically unraveling climate protections, has been further emboldened to weaken environmental regulations and push through energy and infrastructure projects in the name of economic recovery.

Governments around the world “are using the current COVID-19 crisis to roll back environmental protections when we need them most,” Madden said

At the intersection of concurrent threats to the climate, and in the face of opposition and intimidation, land defenders continue to hold the front lines.

CORRECTION: An earlier version of this story misidentified murdered activist Berta Cáceres as Guatemalan. She was from Honduras.