Report: Political Repression On The Rise In The United States

By the Alliance for Global Justice.
August 21, 2020
| Educate!
Report: Political Repression On The Rise In The United States2020-08-212020-08-21https://popularresistance-uploads.s3.amazonaws.com/uploads/2017/12/popres-shorter.pngPopularResistance.Orghttps://popularresistance-uploads.s3.amazonaws.com/uploads/2020/08/philly.jpg200px200px

Above photo: Police used batons, pepper spray, and riot gear against protesters on May 30. Chase Sutton.

The Alliance for Global Justice released a comprehensive report detailing the various forms in which political repression of today’s anti-racist uprising in the U.S. has manifested itself.

The report discusses findings in four key areas of investigation into deepened political repression of the uprising at the state and societal level: a surge in mass arrests and a significant rise in political imprisonments; an increase in arbitrary detentions and the militarization of streets; deaths caused by use of lethal force; and deaths caused by the ignition of racist violence and right-wing terrorism. Our findings and conclusions are summarized below. 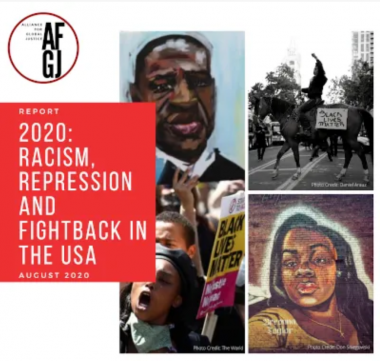 By late June, protests had emerged in at least 1,700 cities and towns, large and small, across all 50 states. In response to this widespread unrest, on June 1, 62,000 National Guard troops mobilized in at least 25 states, working in cooperation with police to “dominate the streets,” as President Trump has described.

Since then, the militarization of police forces and the encroachment of martial law has enabled the violent repression and mass politically-motivated arrests of protestors in almost all major cities across the country, ranging from a few dozen to over a thousand arrests based on location.

Though statistics on this are very difficult to attain, the National Lawyers Guild (NLG) has reported on the prominence of largely arbitrary “protest-related” arrests, including “disorderly conduct,” “resisting arrest,” and “failure to disperse.” According to the NLG, police across the country have arrested protestors, journalists, legal observers, medics, and bystanders alike. Charges range from low-level offenses to federal felonies.

At least a 12% increase in the number of political prisoners in the U.S. since the start of the uprising

We also know that there has been at least a 12% increase in the number of political prisoners in the U.S. since the start of the uprising, according to a statistical analysis from AFGJ. At least seven of today’s protestors are currently facing long-term prison sentences for their acts of resistance against the racist criminal justice system.

While the recent mobilization of riot police and deployment of federal agents to extinguish social unrest isn’t new, additional developments in the federal government’s role and capacity to violently repress the uprising have unfolded under the Trump Administration. On June 26, Pres. Trump issued Executive Order 139333, Protecting American Monuments, Memorials, and Statues and Combating Recent Criminal Violence. The issuing of this executive order has enabled federal law enforcement institutions to more freely deploy federal troops “to assist with the protection of federal monuments, memories, statues, or property.”

As the state continues to militantly protect racist monuments and private property, law enforcement agents continue to exercise deadly force and intimidation against human beings with impunity. Legal observers have consistently reported accounts of law enforcement agents attacking people with batons and bicycles, running protestors down with horses and police vehicles, and freely deploying tear gas, pepper spray, rubber and bean bag bullets, and flash-bang grenades. A plethora of documented evidence has made evident the serious injuries and fatalities caused by the use of state-sanctioned violence against anti-racist protestors and most particularly people of color.

Under the Trump Administration, the federal government continues to play its facilitating role in the persistence of police brutality and right-wing terrorism amid today’s uprisings. Yet another historical moment has shed light on the U.S. political system’s permissiveness of and capacity to inflame racist violence in U.S. society. President Trump has repeatedly encouraged his supporters to take action against protestors in the name of restoring “law and order.” In doing so, the administration has strengthened the narrative of neo-fascists by evoking a sense of imminent danger and providing the militant far-right a platform.

Not only has the Trump Administration proven complicit of today’s violent repression in its own words, but it has also proven to be proactive in its deed. Since the passing of Executive Order 139333 and the unilateral deployment of federal troops in Portland in mid-July, the Trump Administration has given the Customs and Border Protection’s (CBP) elite force, the Border Patrol Tactical Unit (BORTAC) the green light to enter major cities in order to crack down on protests.

The CBP, now stronger than ever after decades of border militarization and investment in immigration patrol forces under the leadership of neoliberal governments, has forged a very close relationship with the federal government. BORTAC agents, the “marine corps of the U.S. federal law enforcement community”, are specially trained to treat civilians as “enemy combatants.” The rise in arbitrary detentions and forced disappearances of protestors and people of color today have made evident the everyday reality undocumented people of color face in the hands of U.S. law enforcement. It also sheds light on the fundamental role of the U.S. police state: to repress people of color for their actions undertaken in defense of their survival.

It is not uncommon for local, statewide, and federal law enforcement agencies in the U.S. to intervene in response to mass civil unrest. From the civil rights movement of the 1960s to the first Black Lives Matter-wave in 2014, to today’s surge of mass resistance against police brutality and our racist criminal justice system, history shows time and time again that this is indeed the norm. Federal law enforcement institutions have assigned undercover police, riot teams and agent provocateurs to violently repress resistance, infiltrate organizations, frame activists for crimes and ultimately sabotage any attempts at unified movement-building against the racist criminal justice system.

We recognize that these practices of state-sanctioned violence aren’t new, and the repression of anti-racist resistance movements transcends U.S. borders. The intentional and systematic role the U.S. state has played in providing training, sponsorship and arms to right-wing militaries and paramilitaries in the global south is an issue that should concern all of us committed to anti-racist movement-building.

From the creation of the School of Americas in 1946, to the bolstered financial and military support of right-wing militaries and paramilitaries in Central and South America during the Cold War, to the continued sponsorship of right-wing client states and plans for regime change in Venezuela and Nicaragua today—U.S. foreign policy has facilitated the repression of colonized peoples globally. The egregious human rights abuses committed against Indigenous and Afro-descendent community leaders today in Honduras and Colombia are the legacy of U.S. imperialist foreign policy.

With local, statewide and federal law enforcement as well as the militant right-wing making its presence known throughout this nationwide uprising, the U.S. anti-racist resistance movement will need more than just its numbers to overcome its repression. In order to succeed, an unwavering commitment needs to be made–to expose human rights violations, mobilize against racial oppression and in solidarity with all anti-colonialist struggles, support victims of state and societal violence, organize for power and be prepared to seize it.