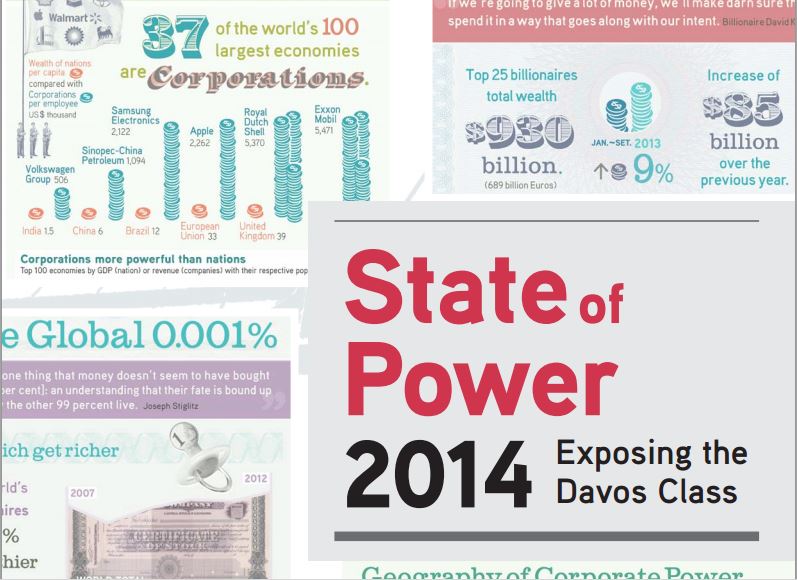 The Transnational Institute, in conjunction with Occupy.com, releases its third annual report exposing the “Davos class,” who have caused financial, economic, social and ecological crises worldwide, as the World Economic Forum meets

“Study the rich and powerful, not the poor and powerless… Let the poor study themselves. They already know what is wrong with their lives and if you truly want to help them, the best you can do is to give them a clearer idea of how their oppressors are working now and can be expected to work in the future.”

The Transnational Institute is proud to launch its third annual ‘State of Power’ report as the World Economic Forum meets in Davos. This anthology exposes and  analyses the principal power-brokers, members of the “Davos class”, who have caused financial, economic, social and ecological crises worldwide. Unless we know which elites control our wealth and resources, understand how they influence political and social processes, and can identify the systems, structures and policies by which they maintain their power, TNI believes our hopes for advancing social and environmental justice are slim. Justice demands a recalibration of power and that requires us to better understand it.

This collection of essays and accompanying infographics draws attention to key dimensions of power and its exercise in our globalised world. These contributions first highlight how power is hidden and concealed. The peasants who lose land or whose river is polluted by mining may not know the name of the owner or corporation threatening their livelihood. They certainly will not know which transnationals are buying the minerals, the politicians who signed the trade deals to facilitate its extraction, or the elusive corporate lobbying groups that successfully pushed through those deals.

Susan George takes an overarching global look at how corporations have systematically and silently appropriated power and authority through lobbying, trade and investment agreements, and through unaccountable expert groups and bodies. David Fig shows how they work in the new corporate scramble for Africa seizing its rich mineral resources, while Andrew Gavin Marshall looks behind the political stage of the European Union to expose how a single corporate group, the European Round Table of Industrialists has systematically influenced and shaped the EU’s economic policies, including its disastrous austerity regime. This concealed corporate power threatens to become further entrenched, as David Sogge makes clear in his analysis of the World Economic Forum’s Global Redesign Initiative that seeks to replace nation-states and democracy with a corporate-led multi-stakeholderism—a term as ugly as the WEF’s intentions.

These essays expose a second key feature of power: its dynamism and complexity. Ben Hayes shows why constant vigilance is needed as it morphs into new arenas and evaluates the significance of Edward Snowden’s historic revelations in revealing the unprecedented reach and power of the security state. Phyllis Bennis explains that US imperialism may be facing its biggest legitimacy challenge following its losses in Iraq and elsewhere, yet its continued unparalleled military dominance and willingness to use violence without accountability may make it more dangerous than ever before. Achin Vanaik focuses on the arrival of new powers which could challenge US unipolarity, but in a wide-ranging essay on the arrival of BRICS and MICS poses crucial questions as to the potential of these nations to offer progressive alternatives to the collective crises humanity faces.

In different ways, Daniel Chavez, Jun Borras, Steve Horn and Peter examine how corporate and state power inter-relate and depend on each other to flourish. Chavez notes that despite the wave of neoliberalism and privatisation that swept the world, public enterprises continue to make up 10% of the sales of the top 2000 corporations and can still exercise vast financial power through Sovereign Wealth Funds in states as diverse as Qatar and Norway. However, they are not necessarily advocates for inclusive sustainable development: they are too embedded in financial markets and dominant in the extractive industries. As the financial crisis so blatantly demonstrated and as Jun Borras exposes in his examination of land grabbing; state and capital are an “inseparable duo”. They depend on each other both to dispossess but also to build legitimacy for appropriation. Peter Rugh and Steve Horn bring the equation together to demonstrate how the “fateful triangle of big energy, finance and complicit governments” prevents a desperately needed radical response to climate change.

Hilary Wainwright tells us that dissembling this fateful triangle requires that we recognise power’s transformative capacity and use our creative skills, alternative knowledge and values to overturn neoliberalism. She points to inspiring examples from anti-austerity movements in Greece and Spain that are not only challenging neoliberalism, but building practical, productive alternatives that embody the values of solidarity, social justice, co-operation and democracy to which we all aspire.

We hope this book will be a resource and tool that supports that critical transformation.

We are very glad this year for the collaboration with Occupy.com which has been running a similar Global Power Project and who supported the essays by Andrew Gavin Marshall, Steve Horn and Peter Rugh.

State of Corporations – The rise of illegitimate power and the threat to democracy (PDF, 902KB)
Susan George

State of Davos – The camel’s nose in the tents of global governance (PDF, 308KB)
David Sogge

State of the South – Emerging powers and the potential for progressive change (PDF, 760KB)
Achin Vanaik

State of the State – The state is dead! Long live the state! (pdf, 728KB)
Daniel Chavez

State of Europe – How the European Round Table of Industrialists came to wage class war on Europe (PDF, 332KB)
Andrew Gavin Marshall, Occupy.com

State of the Land – Reconfiguration of the power of the state and capital in the global land rush (PDF, 348KB)
Saturnino M. Borras Jr.