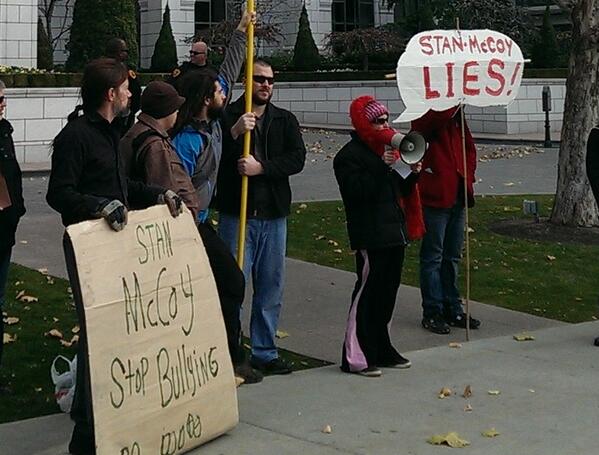 Report: US Bullying At TPP Negotiations For Big Pharma Profits

Above: Signs outside of TPP negotiations highlighting the bullying tactics and dishonesty of Stan McCoy of the US Trade Representatives Office.  Source: Twitter

Outrageous US bullying by US Trade Representative Stan McCoy on intellectual property and health. McCoy puts profits of pharmaceuticals ahead of the lives of people.

“The world should stand up to the United States.  US corporations are not more important than people’s lives.”

A key dispute in the TPP negotiations is the patents on pharmaceutical drugs and medical procedures.  Long patents inflate the profits of the pharmaceutical industry by not allowing less expensive generic drugs on the market. This means that people around the world will not be able to afford critical, often life-saving, drugs and medical procedures.  It also means that countries like Japan, Australia and New Zealand that have national health care systems will see the cost of healthcare rise to a breaking point, undermining some of the best health systems in the world.

In order for the US to get its way, Stan McCoy, Assistant US Trade Representative for Intellectual Property and Innovation, is chairing the meetings on intellectual properties and medicines.  He has been using bullying tactics to force countries to agree to positions that will harm people in the countries negotiating the TPP, including the US.

“The US has adopted a strategy of exhaustion in its bullying of negotiators on the crucial intellectual property chapter to force countries to trade away health in the Trans-Pacific Partnership Agreement negotiations in Salt Lake City,” according to Professor Jane Kelsey from the University of Auckland, New Zealand, who is monitoring the negotiations. “The US has stepped up its aggression as they move towards their ‘end point’ of the TPP ministerial meeting in Singapore from 7 to 10 December.”

Margaret Flowers, MD a health policy expert from the US says “The Office of the US Trade Representative is putting the interests of trans-national health corporations before the needs of people. If the US position is forced through, the TPP will extend patents for medications, medical devices and even procedures for exorbitant lengths of times. This will inflate prices, keeping treatments out of reach for those who need them. This will cause unnecessary suffering and death, especially for the most vulnerable populations, and will undermine health systems around the world and at home.”

“This is a loaded game,” Professor Kelsey said. “McCoy sets the agenda and timetable. Negotiators are working from morning until late at night and preparing to work all night, if necessary. “This is a crucial period for New Zealand and a number of other countries,” Kelsey observed. The text published by Wikileaks last week shows they have tabled an alternative to the US proposed text that has been repeatedly rejected.”

“New Zealand’s trade minister Tim Groser and his counterparts from the other ten countries must tell the US to stop this behaviour now,” Kelsey said. Flowers added: “Countries negotiating with the United States should not allow themselves to be bullied but should stand up to the United States.  It is looking very unlikely that President Obama will be able to get TPP through the Congress. Why would any country negotiate against the interests of their people?”

The US has around twenty people in Salt Lake City for the intellectual property chapter, who can rotate. Some countries have only one delegate for crucial talks on intellectual property on medicines. Their negotiations on medicines have been extended beyond the dates that were scheduled before negotiators came.  They have continued despite the fact that some health negotiators, especially from poor countries, could not extend their stay.

This follows a pattern of abuse over recent rounds reported in Inside US Trade and other media, where McCoy has acted as a gatekeeper, deciding what proposals from other countries are allowed into the text and what are not.

“This is an early warning of the extreme bullying that can be expected in when the trade ministers seek to close the deal off in December,” Professor Kelsey warned.