Reports On ‘Fed Up’

Yesterday was the 100th birthday of the Federal Reserve.  A private corporation that was given the power to create money in 2013.  There are 12 regional Federal Reserve Banks whose stock is owned by commercial banks.  Yesterday there were protests at all 12 regional banks organized under the headline ‘FedUp’ and they sought to ‘Illuminate the Fed.’  They describe yesterday as “launching a year long coast-to-coast campaign to shine light—literally, using personal flashlights, Light Brigade letters, and high-powered illuminator projections—on a private banking body that operates in darkness and secrecy.”  Occupy activist Jane Smith described their purpose: “The Federal Reserve is owned entirely by Wall Street banks, so our money is issued by a private institution.  Money should be created by the government as money, not interest bearing debt.“ See FedUp100.org 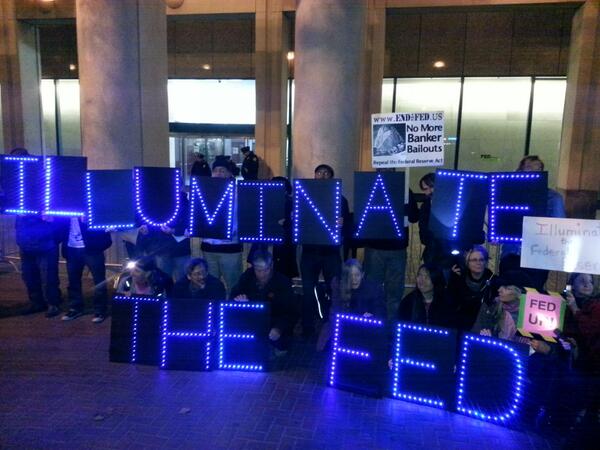 The mission was to “Illuminate The Fed,” educating people about the Federal Reserve – which is not a Federal Agency, yet holds power over the economic vitals of the United States and much of the world.

Taking a cue from the Overpass Light Brigade (web page), passersby were made aware with LED lettering.

Taking a cue frm the original Illuminator Project out of New York City, San Francisco’s Illuminator crew projected messages about the Fed onto its massive structure and adjacent buildings. 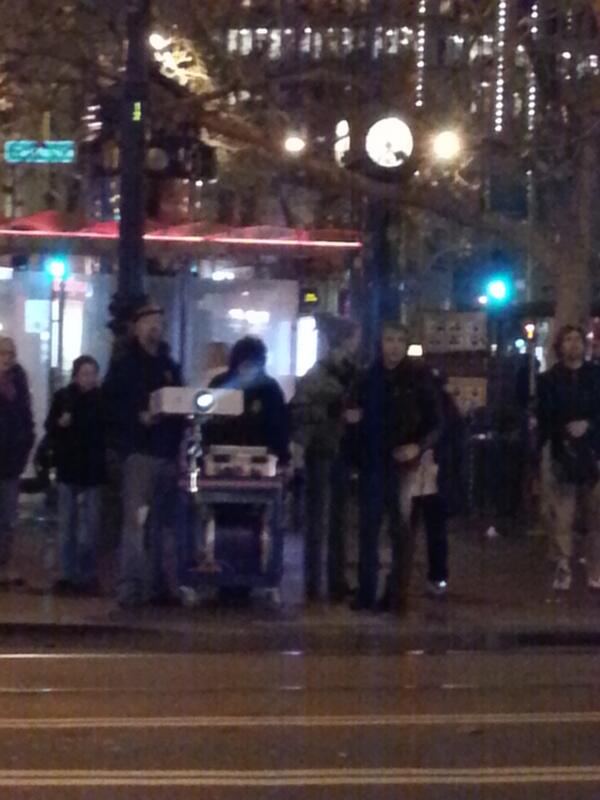 Jane Smith illuminated the crowd with a well-prepared and well-executed talk about what the Federal Reserve is (a private bank, owned by other, private, Wall Street banks) and what it does (controls the money supply to the benefits of its bankster owners). She was one of the original SF Occupiers in October of 2011, now of Occupy Bay Area United and Strike Debt Bay Area, and was one of the main organizers of the event.

Other speakers included a representative from End the Fed San Francisco, the Libertarian Party and the Thrive Movement, all addressing the problems with the Fed and why it should be eliminated after being illuminated.

Not illuminating anything were dozens of SFPD officers – but not enough, apparently, to prevent some enterprising graffiti artist to tag one of their vehicles appropriately. They accomplished nothing except the consumption of donuts, coffee and overtime. 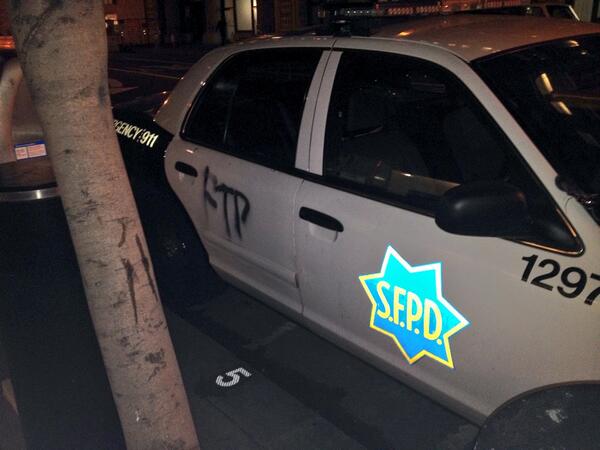 After the illuminating and speaking came the marching. Thrice around the Federal Reserve Building, symbolizing the Biblical march around the Walls of Jericho. 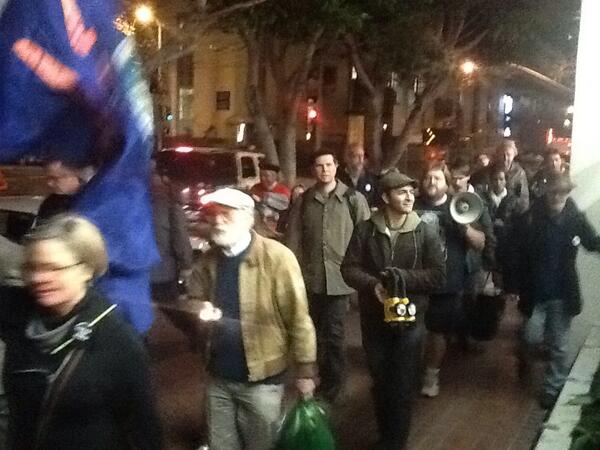 Unfortunately, the Fed did not come crashing down.

We’re still working on it.

Washington, DC: Barry Knight Is Fed Up with the Fed. He Thinks You Should Be Too. The U.S. Federal Reserve, America’s central bank, turns 100 years old on December 23. Historically, there has been plenty of opposition to a central bank, but today, Knight believes the public is operating under a benign misperception.

“Most Americans when they think of Federal Reserve and the Board of Governors, terms like governors and federal, they believe that this is a government agency, when in fact it is not,” he said. “It is a private institution or a corporation, and by the very definition of a corporation, its sole purpose to is to maximize profit. And they don’t care about the socio-economic impacts.”

Among the protests at the twelve branches of the Federal Reserve around the country, the protest at its very seat of power was probably the smallest. Only a handful of activists with signs and umbrellas stood in the drizzle on Constitution Ave.

Although it is a private entity, the Federal Reserve has sweeping powers to print money and alter interest rates without oversight by Congress. Barry Knight, holding a sign that said, “Federal Reserve Celebrating 100 Years of Debt Slavery,” tried to bring home how the Fed’s actions impact ordinary people.

“It dumps $85 billion into the economy, but the majority gets sucked up to the top. And meanwhile all that extra money they’ve added to the economy makes the dollars that we have worth even less.”

FedUp100′s solution is to nationalize the Federal Reserve from ownership by private member banks, which have benefited in trillions of dollars of interest-free loans, including the $700 billion TARP (Troubled Asset Relief Program) bailout of 2008.

“There’s no end to their corruption. They have ripped off so many people!” Knight said. “The repeal of the Glass-Steagal Act took away a lot of the regulations that were imposed on banks before and let them operate as casinos after that. Just like a casino, the house always wins.”

United Front Against Austerity (UFAA), an organization backing today’s protests against the Federal Reserve, suggests nationalization of the Federal Reserve could be accomplished by opening two “credit windows”: $4 trillion in zero-interest bonds to rebuild America’s infrastructure, and $1 trillion toward student loan refinancing, greatly expanding Senator Elizabeth Warren’s proposed plan. Such solutions might benefit people rather than the investment banks.

As of January, the Federal Reserve will cut back on buying government securities and less money will be released into the economy. But the enormous amount of debt already incurred by the Federal Reserve’s policies is going to be passed on to future generations.

“People should be concerned about themselves, but they’re not looking at the big picture,” Knight said. “They don’t realize that a year from now, two years from now, five years from now, the very same institutions that have caused so much deceit and corruption, fraud will steal their pensions, and they can be working their whole lives, only to find out when they retire, all that retirement is gone.” Interview with Barry Knight. Police interrupt the interview to throw him off Federal Reserve property.

New York:  Our Lives Are Not For Profit

A rainy day at the Federal Building in the Financial District (Wall Street). Picture by Ellen Davidson; both of us and Gerry Condon have started fasting today on just water and a bit of lemon juice (optional but good) and every Monday in solidarity with prisoners in Guantanamo and those tens of thousands human beings being held here in the U.S. for-profit prison industry in long term solitary confinement. 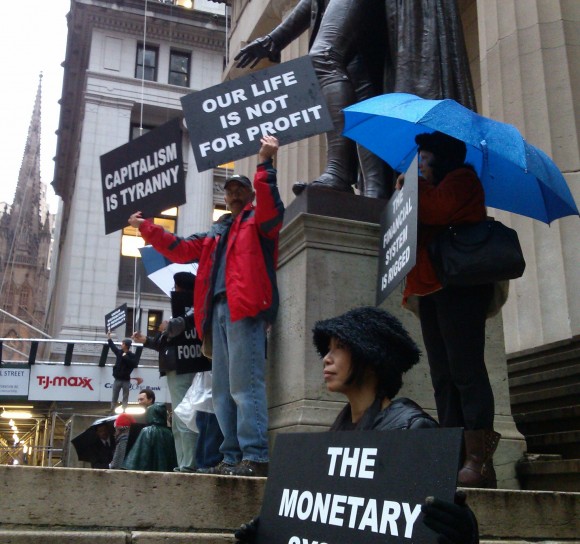