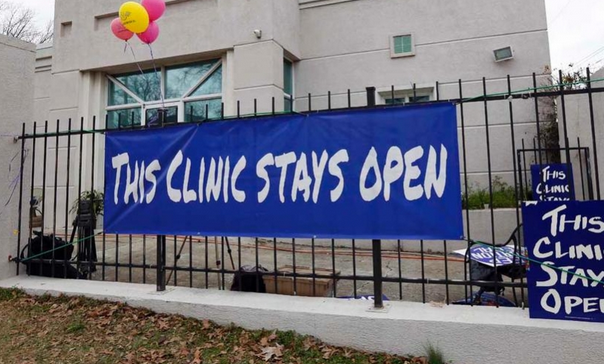 Abortion-rights advocates said the law would shut more than half of the clinics remaining in the state.(Photo: AP)

Advocates for reproductive rights welcomed the ruling of the U.S. Supreme Court on Monday which put a block on a Texas law that would have shuttered nearly every abortion clinic in the state.

In a 5-4 decision (pdf), the ruling came in the form of a stay that will delay enforcement of the law—originally passed in the Texas legislature as H.B. 2 and signed into law in 2013—until a full challenge is taken up by the court. The stay, in effect, suspends a ruling from the U.S. Court of Appeals for the Fifth Circuit earlier this month which upheld specific provisions of the law that would have likely resulted in the closure of all but nine abortion clinics in the state.

Defenders of women’s health say the decision is a good thing for women in Texas, but that far more is needed to restore the right to choose in Texas and beyond.

“This Supreme Court decision is a temporary victory for Texans’ health and safety, but it only postpones a public health disaster,” said NARAL Pro-Choice Texas executive director Heather Busby. “If allowed to go into full effect, H.B. 2 will devastate access to reproductive health care by leaving the state with fewer than 10 abortion clinics. Health care should not depend on your zip code or your bank balance. We can celebrate this decision today, but the reality is that Texans’ health and safety are still in jeopardy.”

With a host of anti-abortion laws in states around the country, conservative lawmakers have been executing a far-reaching assault on reproductive rights by passing myriad regulations which are making it harder for abortion clinics to remain open as well as imposing increasingly draconian laws on abortion providers and restrictions on women who want or need to terminate a pregnancy.

“Our Constitution rightly protects women from laws that would create barriers to safe and legal abortion care, but Texas politicians have tried to sneak around the Constitution with sham regulations designed to close clinics’ doors,” Northrup said. “The Supreme Court has affirmed time and again that a woman has a constitutionally protected right to decide whether to continue or end a pregnancy, and we are confident the justices will make clear once again that the constitutional protections for safe and legal abortion are real.”Nancy Northup, president and CEO of the Center for Reproductive Rights, said she welcomed Monday’s ruling by the court, but added that it is now time to put a stop to what she termed “clinic shutdown laws” once and for all. Such laws, she said, have swept the South in recent years, threatening to further devastate abortion access in a region already facing limited availability of reproductive health care services.  Currently, the last abortion clinic in the state of Mississippi is awaiting a decision on whether the U.S. Supreme Court will review its state’s clinic shutdown law and in neighboring Louisiana a trial has just concluded in the challenge to a similar set of restrictions.

Speaking on the ruling, Planned Parenthood Action Fund president Cecile Richards said that the assault on reproductive rights is not isolated to Texas and that all people concerned about the rollback of individual rights and constitutional protections should be very concerned about what the Republican-controlled states have been doing.

“This dangerous law never should have passed in the first place,” said Richards, “which is why we need to elect leaders who will champion women’s health and rights. Texas has become a cautionary tale and an example of what could happen in all 50 states if Rick Perry, Scott Walker, Jeb Bush and other Republican contenders have their way.”