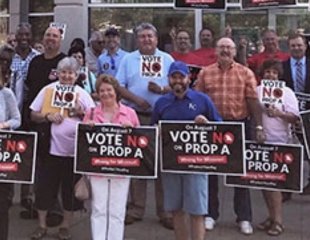 Republican Anti-Union Bill Goes Down In Flames In Missouri

Above Photo: From Alternet.org. Missouri struck down a right to work law.

“Right to work” is dead in the Show Me State.

On Tuesday night, voters in Missouri defeated Proposition A, a referendum which would have allowed a “right to work” law to go into effect in the state.

This marked the first time a right to work law has ever been defeated by popular vote. It is an enormous setback for Missouri Republicans, who had made imposing this law a signature policy goal after winning full control of the state government in 2016.

Right to work laws, which currently exist in 27 states, ban labor unions and businesses from negotiating a “security agreement” in bargaining, in which a union may collect “agency fees” from workers who are not a member of the union. Since unions generally represent all workers in a workplace, not simply their own members, these fees cover the cost of bargaining for nonmembers and prevent free ridership — and lead to wage increases.

Corporations and right-wing politicians, however, have painted these fees as a threat to individual freedom and sought to pass laws banning them — which has depressed union membership and wages around the country. Earlier this year, they persuaded the Supreme Court to void all such security agreements in public sector unions. Workers in the private sector, however, are still free to pursue them in states without right to work laws.

In February 2017, then-Gov. Eric Greitens — who later resigned amid an unrelated sexual assault and blackmail scandal — signed the right to work bill in Missouri. In response, outraged union workers got a referendum on the ballot to overturn it, with AFL-CIO mobilizing steelworkers and construction workers to go door to door to gather hundreds of thousands of signatures.

Republicans were desperate to win this vote, even going so far as to pass a law moving the referendum from the November ballot to the August primary in the hope lower turnout would kill the measure. But in the end, it wasn’t even close. Voters rejected right to work 67.5 to 37.5.

In Missouri, workers stood up and said no to the erosion of their right to organize. And the business interests pushing to undermine unions have been put on notice.