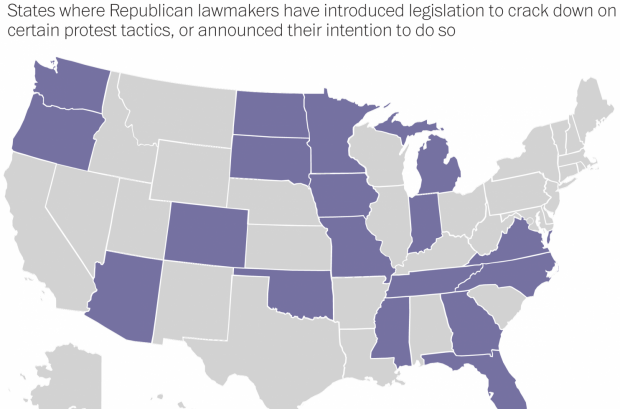 Above Photo: From News Report

The laws’ intent is increasing the penalties for protest-related activity to the point that it results in self-censorship among protesters who have every intention to obey the law.

Since the election of President Trump, Republican lawmakers in at least 18 states have introduced or voted on legislation to curb mass protests in what civil liberties experts are calling “an attack on protest rights throughout the states.”

From Virginia to Washington state, legislators have introduced bills that would increase punishments for blocking highways, ban the use of masks during protests, indemnify drivers who strike protesters with their cars and, in at least once case, seize the assets of people involved in protests that later turn violent. The proposals come after a string of mass protest movements in the past few years, covering everything from police shootings of unarmed black men to the Dakota Access Pipeline to the inauguration of Trump.

Some are introducing bills because they say they’re necessary to counter the actions of “paid” or “professional” protesters who set out to intimidate or disrupt, a common accusation that experts agree is largely overstated. “You now have a situation where you have full-time, quasi-professional agent-provocateurs that attempt to create public disorder,” said Republican state senator John Kavanagh of Arizona in support of a measure there that would bring racketeering charges against some protesters.

Protesters in cities across the nation rallied against President Trump’s executive order banning U.S. entry for refugees, migrants and foreign nationals for 120 days. Here’s a look at some of the protests that took place in airports and city squares across the U.S. after the order was signed. (Dalton Bennett, Erin Patrick O’Connor, Elyse Samuels, Monica Akhtar/The Washington Post)

Others, like the sponsors of a bill in Minnesota, say the measures are necessary to protect public safety on highways. Still other bills, in states like Oklahoma and South Dakota, are intended to discourage protesting related to oil pipelines.

Democrats in many of these states are fighting the legislation. They cite existing laws that already make it a crime to block traffic, the possibility of a chilling effect on protests across the political spectrum, and concerns for protesters’ safety in the face of aggressive motorists.

None of the proposed legislation has yet been passed into law, and several bills have already been shelved in committee.

Critics doubt whether many of the laws would pass Constitutional muster. “The Supreme Court has gone out of its way on multiple occasions to point out that streets, sidewalks and public parks are places where [First Amendment] protections are at their most robust,” said Lee Rowland, a senior attorney with the American Civil Liberties Union.

This is by no means the first time in American history that widespread protests have inspired a legislative backlash, says Douglas McAdam, a Stanford sociology professor who studies protest movements. “For instance, southern legislatures — especially in the Deep South — responded to the Montgomery Bus Boycott (and the Supreme Court’s decision in Brown v. Board of Education) with dozens and dozens of new bills outlawing civil rights groups, limiting the rights of assembly, etc. all in an effort to make civil rights organizing more difficult,” he said via email.

“Similarly,” he added, “laws designed to limit or outlaw labor organizing or limit labor rights were common in the late 19th/early 20th century.”

The ACLU’s Rowland says the new bills are not about “creating new rules that are necessary because of some gap in the law.” She points out, for instance, that “every single city and county in the United States” already has laws on the books against obstructing traffic on busy roads.

Rather, Rowland says the laws’ intent is “increasing the penalties for protest-related activity to the point that it results in self-censorship among protesters who have every intention to obey the law.”

Even the accusations of “paid” or “professional” agitators, which Trump has promoted, have been leveled at protesters before.

“This is standard operating procedure for movement opponents,” Stanford’s McAdam said. “Civil rights workers were said to be ‘outside agitators, and the tea party was dismissed as an ‘AstroTurf’ phenomenon — funded from on high by the Koch brothers and others — rather than a legitimate ‘grass roots’ movement. In all these cases, including the present, the charges are generally bogus, with the vast majority of protesters principled individuals motivated by the force of deeply held values and strong emotion.”

But now, social media has made it possible to organize larger protests more rapidly than ever before. “The older laws are becoming less effectual in dealing with these kind of groups,” said Michael Heaney of the University of Michigan, a political sociologist who studies protest movements. On top of that, “the courts have said, ‘Look, the people have a right to protest in this way.’ ” So on some level the new legislation represents an attempt by lawmakers to catch up with new realities of 21st-century protesting.

Here’s a list of laws that have been introduced or voted on since the election.

Arizona’s bill, introduced this week, would open up protests to anti-racketeering legislation, targeting protesters with the same laws used to combat organized crime syndicates. It would also allow police to seize the assets of anyone involved in a protest that at some point becomes violent. It recently passed the state Senate on a party-line vote and is now before the House.

A bill under consideration in Colorado would strengthen penalties for “tampering” with oil and gas equipment. It’s intended to prevent activists from shutting off pipelines, a tactic that’s been used in other states.

A bill introduced by Republican George Gainer in the Florida Senate this month would provide criminal penalties for protesters obstructing traffic and exempt drivers from liability if they struck a protester under certain conditions. It was filed this week, and if enacted would take force on July 1.

A “Back the Badge” bill recently passed by the Georgia Senate increases penalties for blocking “any highway, street, sidewalk or other public passage.” The bill is sponsored by six Republican senators.

A bill supported by nine Republican sponsors would make protesters who intentionally block highways subject to felony charges and up to five years in prison. The bill’s lead sponsor told the Des Moines Register it was introduced in response to a November incident in which a protest Trump shut down part of Interstate 80 in Iowa.

An Indiana Senate committee recently toned down a bill that would have allowed police to shut down highway protests using “any means necessary.” The current version allows police to issue fines for such behavior.

A Michigan bill voted on late last year would have increased fines for certain “mass picketing” behavior, and made it easier for courts to shut down such demonstrations.

Bills under consideration in Minnesota would increase fines for protesters blocking highways and airports. A separate measure before the legislature would make it possible for jurisdictions to charge protesters for the costs of policing the protests.

A Republican lawmaker has introduced legislation that would make it illegal for protesters to wear masks, robes or other disguises during protests deemed to be illegal.

A bill before the Mississippi legislature would make obstruction of traffic a felony punishable by a $10,000 fine and a five-year prison sentence.

A North Carolina Republican has pledged to introduce legislation making it a crime to “threaten, intimidate or retaliate against” current or former state officials, in response to an incident involving the heckling of Gov. Pat McCrory. The Senator proposing the legislation, Dan Bishop, confirmed via email that he still intends to introduce the legislation, perhaps as early as next week, after consulting with potential co-sponsors.

A number of North Dakota bills have been introduced in response to the long-standing protests there against the Dakota Access Pipeline. The measure that drew the most attention was a bill that would have removed penalties for motorists who strike protesters with their car in some circumstances. That bill failed to make it out of the House, but a number of other measures increasing penalties for certain types of protest action are advancing through the legislature.

Inspired by pipeline protests in North Dakota, the Oklahoma legislature is considering a bill that would increase penalties for trespassing on certain pieces of “critical infrastructure” like pipelines and railways.

A novel piece of legislation in Oregon would require public community colleges and universities to expel any student convicted of participating in a violent riot.

A Senate panel in South Dakota recently approved a bill that would increase penalties for certain acts of trespassing and blocking highways. It’s a response to pipeline protests in North Dakota, and to the potential for similar protests in South Dakota if the Keystone XL pipeline gets built.

A Tennessee Republican wants drivers to be protected from liability if they inadvertently strike a protester who is blocking a roadway.

A Virginia bill that would have increased penalties for people who refused to leave the scene of a riot or unlawful protest died in the state Senate last month. The bill had been requested by law enforcement.

Washington lawmakers are considering a bill to increase penalties for people blocking highways and railways, acts that the bill’s sponsor has characterized as “economic terrorism.”