Above photo: Dr. Carol Paris and Russell Mokhiber in front of the US Supreme Court. June, 2012 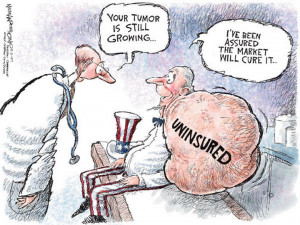 Today Politico provided more details of the Republican’s plans to repeal and replace Obamacare (the Affordable Care Act). Overall, the impacts on the health insurance industry are hard to predict, but we can say for certain that they will do what they can to protect their bottom line. The impacts on people are clearer to see – fewer people with low incomes will have access to Medicaid, people with low incomes who do not qualify for Medicaid will be unlikely to be able to afford health insurance premiums, especially if they are older and high quality health plans will continue their decline.

It is also clear that the Republican plan will worsen the healthcare crisis in the United States.

Here are some of the details:

The healthcare crisis won’t go away until we, the people, organize and mobilize to demand it. That time is now. We are spending enough on health care in the United States right now to provide comprehensive coverage to every person without premiums, co-pays or deductibles.