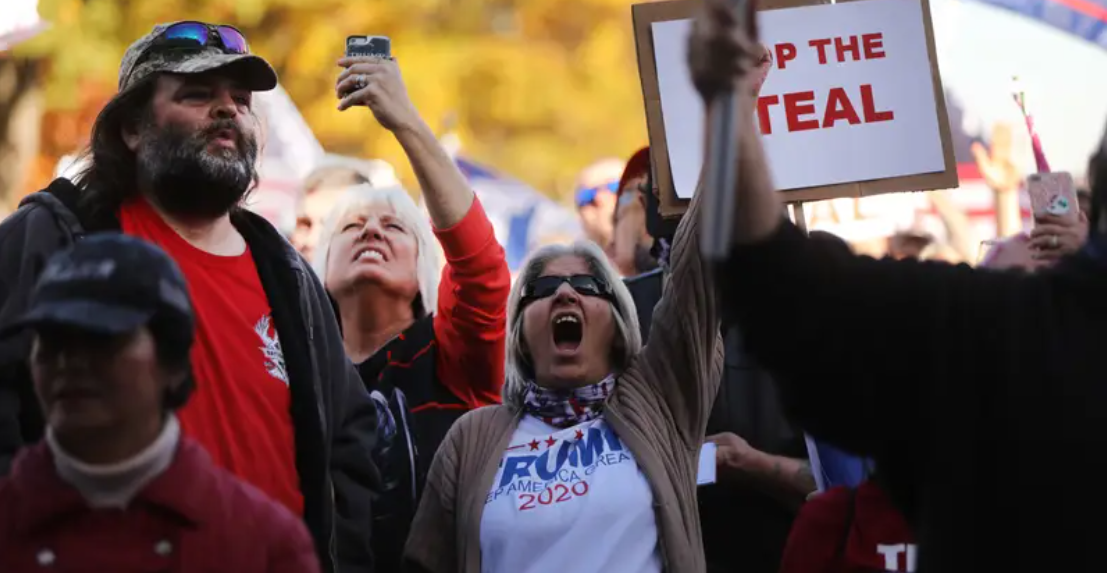 They are doing everything in their power to cast doubt on the validity of the presidential election.

Prominent Republicans are doing everything in their power to cast doubt on the validity of the presidential election — after spending months trying to confuse voters — while in the next breath celebrating Republican wins in Congress. In reality, there’s virtually nothing they can do to actually change the result.

Mitch McConnell, who as the Senate majority leader is the most powerful Republican in Congress, defended Trump’s groundless legal challenges, and the most powerful law enforcement official in the country launched an investigation into Trump’s unsupported claims of voter irregularities.

Even as world leaders congratulate Biden on his victory, the president himself refuses to acknowledge the reality of his loss as his fervent GOP supporters and right-wing base join his desperate scramble to fight the election’s outcome in court and on Twitter.

Trump has refused to concede the election to Biden, breaking with the long-standing tradition of losing presidents giving conciliatory concession speeches and helping the incoming victor with the transition.

Instead, Trump is fomenting the false narrative that the election was stolen from him by spewing spurious voter fraud claims on Twitter and launching several frivolous lawsuits in key states like Arizona, Georgia, Wisconsin, Michigan, and Pennsylvania.

Most of the lawsuits have been met with little success so far, and legal experts believe they are largely meritless. The lawsuits that have had some success are largely marginal and don’t impact the actual vote count. State officials have predicted that recounts are unlikely to drastically change the vote tally. On Monday, Trump’s campaign filed yet another lawsuit in Pennsylvania, seeking to stop state officials from certifying the election results, alleging, without evidence, that there were voting irregularities.

Top GOP lawmakers, including McConnell and Senate Judiciary Committee chair Lindsey Graham, have backed the president’s refusal to concede and have declined to recognize Biden as the legitimate winner even as they celebrated Republican wins in the House and Senate.

“President Trump is 100% within his rights to look into allegations of irregularities and weigh his legal options,” the Senate majority leader said. “Let’s not have any lectures about how the president should immediately, cheerfully accept preliminary election results from the same characters who just spent four years refusing to accept the validity of the last election.”

McConnell acknowledges that the election led victories to GOP senators and House members. But for presidential race, he says "no states have yet certified their election results" and Pres. Trump is "100% within his rights" to weigh legal options. He makes no mention of Joe Biden pic.twitter.com/X8rZUXVaOA

Graham, who celebrated his reelection in South Carolina, went a step further, encouraging Trump to “fight back” and not conede.

“If Republicans don’t challenge and change the US election system, there’ll never be another Republican president elected again,” Graham told Fox News on Sunday. “To my Republican colleagues out there, we have to fight back or we will accept our fate.”

He urged Trump to persist in his fight to overturn the election results. “Trump has not lost,” he falsely claimed. “Do not concede, Mr. President. Fight hard.”

Ohio Rep. Jim Jordan, the top Republican on the House Judiciary Committee, has also been parroting the president’s false claims about ballot integrity and poll watchers in Pennsylvania.

Sen. Susan Collins, who was reelected to her Maine seat, was among the few Republicans who publicly acknowledged Biden as the president-elect. But even so, she hedged her cautious acknowledgment of Biden’s “apparent victory” with the assertion that Trump was well within his rights to challenge the election results.

The Department of Justice investigation

In a departure from the Justice Department’s long-standing policies on not interfering with election outcomes, Attorney General Bill Barr authorized federal prosecutors to investigate Trump’s baseless claims of voter fraud before the results of the election are certified. It is unclear what these prosecutors would even be investigating.

Critics perceived Barr’s move as politicizing the most powerful law enforcement agency in the country and undermining its independence from the White House. Barr’s memo prompted Richard Pilger, the head of the DOJ’s Election Crimes Branch, to step down from his position. While Barr’s directive breaks the DOJ’s policy not to take “overt investigative steps” until after an election is certified, he said in his memo that the “practice has never been a hard and fast rule.”

“Such a passive and delayed enforcement approach can result in situations in which election misconduct cannot realistically be rectified,” Barr wrote.

Officials are exploiting their authority to question the election

Two Republican US senators in Georgia who are facing runoffs in January have called for the state’s top election official — who is also Republican — to resign, echoing Trump’s claims of “failures” in the electoral process without providing evidence to back it up.

Sens. David Perdue and Kelly Loeffler demanded that Georgia’s secretary of state, Brad Raffensperger, resign, saying he “has failed to deliver honest and transparent elections” in the state, where Biden is currently leading. Perdue, however, is also leading his Democratic opponent Jon Ossoff; he fell just short of the 50% of the vote needed to win the race outright. Raffensperger refused to resign and defended his handling of the election, saying that while he was “sure” there was “illegal voting” — there’s no evidence that there was — it was “unlikely” that it would rise to the “numbers or margin necessary” to change the outcome for Trump.

Trump and his allies had pressured Perdue and Loeffler to make the demand, the Atlanta Journal-Constitution reported Tuesday.

Emily Murphy, the head of the General Services Administration who was appointed by Trump, has so far refused to formally recognize Biden as the president-elect by not signing paperwork to authorize the transition and begin the transfer of power. That rubber stamp is typically a bureaucratic given, not a political fight, and would allow Biden to access federal funds and facilities to begin setting up his administration to take over in January.

Adding to the confusion, Secretary of State Mike Pompeo said at a press conference Tuesday, “There will be a smooth transition to a second Trump administration.”

Pompeo’s response came after he was asked whether the State Department will engage with Biden’s team to ensure a smooth transition of power. He smiled after saying the line, but it was unclear whether he was joking.

The Haley-Pompeo State Department validated a stolen election in Honduras in 2017; delegitimized one in Venezuela the next year, recognizing a fake president, then falsely alleged fraud in Bolivia in 2019.

Pompeo’s behavior might be undemocratic, but it’s distinctly American. https://t.co/x3B4rKamMs

Pompeo continued: “We’re ready. The world is watching what’s taking place here. We’re going to count all the votes. When the process is complete, there’ll be electors selected. There’s that process. The Constitution lays it out pretty clearly. The world should have every confidence that the transition necessary to make sure that the State Department is functional today, successful today, and successful with a president who’s in office on Jan. 20, a minute after noon, will also be successful.”

State lawmakers in battleground states are also amplifying Trump’s efforts to challenge the election results. Robin Vos, speaker of the Wisconsin State Assembly, citing unfounded concerns about mail-in ballot dumps and voter fraud, directed the Assembly Committee on Campaigns and Elections to “use its investigatory powers” to “review how the election was administered.”

Top Republicans in the Pennsylvania legislature called for Democratic Gov. Tom Wolf to conduct a “full audit” into the election before the results are certified on Nov. 23, citing actions taken by the state Supreme Court and the Department of State that “have cast an unnecessary cloud on the election process.”

MAGA world adds to the noise

Trump’s supporters are rallying in Arizona, Pennsylvania, and Colorado, bolstering his unfounded attacks on the election process and refusing to accept Biden as the country’s next leader. Hundreds of MAGA supporters are attending Stop the Steal rallies at state capitols across the US, including Republican lawmakers like Jordan and Pennsylvania Rep. Scott Perry.

Many of Trump’s supporters have been fueled by the false and misleading claims made by Eric Trump and Donald Trump Jr., the president’s sons, who have been relentlessly stoking voter fraud claims on their Twitter accounts.

In a bizarre Trump campaign press conference on Monday, White House press secretary Kayleigh McEnany — acting in her “personal capacity” — doubled down on the president’s unsubstantiated allegations about voter fraud, even prompting a Fox News anchor to cut away from her remarks.