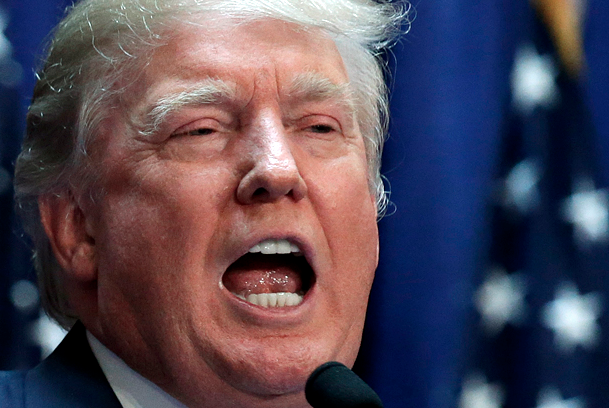 After a year of making enemies out of many in communities of color and of women, the Republicans (amusingly) blame Soros for protests. (The only Soros connection they point to is funding of Move On.) Blowback should have been the expected outcome of a campaign which relied heavily on bigotry.

After five days of anti-Trump protests and mayhem led by left-wing groups, including one linked to top Clinton donor George Soros, Republicans said Sunday that it’s time for Democrats to call off the dogs.

“I think that the President of the United States, Secretary Clinton, Bernie Sanders, perhaps, others can come forward and ask for calm and ask for a peaceful transition and ask their supporters, which are masquerading as protesters now — many of them professional and paid by the way, I’m sure — ask them to give this man a chance so that this country can flourish,” Ms. Conway said on Fox News Sunday.

The far-left ANSWER Coalition and Socialist Alternative rushed to organize protest marches in major U.S. cities within hours of Mr. Trump’s presidential victory Tuesday, as did MoveOn.org, which has reportedly received funding from Mr. Soros, a billionaire.

“I know both Secretary Clinton and President Obama were very gracious, and I respect that a lot in the way they handled it the day after, two days after,” Mr. Giuliani said on ABC’s “This Week.” “But I wish they would say something about it, too. Because after all, these are supporters of President Obama and Hillary Clinton, and maybe they could say something about this. Really not the right thing in the democracy.”

Later in the interview, Mr. Giuliani added, “I’m not sure these are even Hillary Clinton, Barack Obama supporters. I think these people are, you know, kind of like professional protesters more.”

Tens of thousands of demonstrators have taken to the streets in dozens of U.S. cities to decry Mr. Trump’s election under the hashtag #NotMyPresident, including rallies in front of Trump Tower in New York City and Chicago.

MoveOn.org billed its more than 200 “United Against Hate” actions as “peaceful,” and while most of the protest activity has remained so, some rallies been marred by vandalism and violence.

A protester was shot Friday in Portland, Oregon, the day after 26 people were arrested after setting fires and using bats to smash store and car windows, according to The Associated Press.

Planned Parenthood Action encouraged its supporters last week to join the MoveOn.org rallies in a Facebook post, saying, “People are uniting across the country to stand against hate. Join MoveOn.org tonight for a gathering of solidarity, resistance, and resolve near you.”

In her concession speech Wednesday, Mrs. Clinton said, “Donald Trump is going to be our president. We owe him an open mind and the chance to lead,” although she has not specifically addressed the protests.

Mr. Obama, who met with Mr. Trump shortly after the election, asked voters Wednesday to “remember we are all on the same team.”

Other Democrats have been less gracious. Senate Minority Leader Harry Reid fueled the uproar Friday with a statement saying that the election victory “does not absolve Trump of the grave sins he committed against millions of Americans.”

“If this is going to be a time of healing, we must first put the responsibility for healing where it belongs: at the feet of Donald Trump, a sexual predator who lost the popular vote and fueled his campaign with bigotry and hate,” Mr. Reid said in his statement.

Ms. Conway said there would have been a much different reaction if Republicans had reacted in the same way in the event of a Clinton victory.

“We all know if the shoe was on the other foot and Hillary Clinton had won — which is what all the media were expecting, if not hoping for — then we know that if there were protesters, if there were two Donald Trump protesters somewhere, people would be freaking out that his supports were not accepting election results,” Ms. Conway told NBC’s”Meet the Press.”

“It’s time really for President Obama and Secretary Clinton to say to these protesters, ‘This man is our president,’ ” she said.