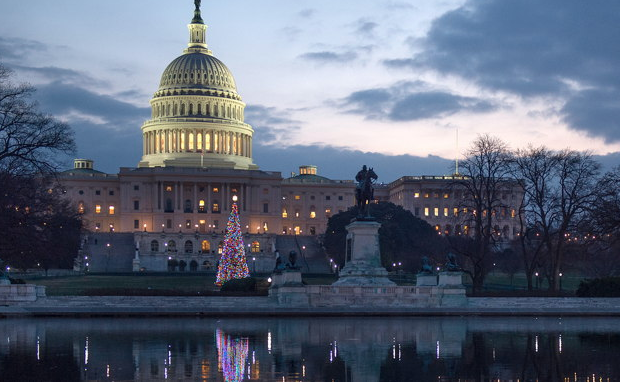 Congress Sets Value Of All Public Lands & Buildings To $0

For Easy Sell Off At Taxpayers’ Expense

The Republican-controlled U.S. House of Representatives passed a rules change this past week by a vote of 234 to 193, that would allow Congress the ability to essentially give away federal lands and buildings for free. The new rule, authored by GOP Rep. Robert Bishop of Utah, Chairman of the House Natural Resources Committee, codifies that any legislation to dispose of federal land and natural resources would have a net sum zero cost to taxpayers. As the rule applies only to the House legislative rules, it is not subject to approval by the Senate or a presidential signature and is effective immediately.

All Democrats in the House voted against the measure, while only three Republicans joined them in opposing it, USA TODAY reports. The Wilderness Society said “this move paves the way for a wholesale giveaway of our American hunting, fishing and camping lands that belong to us all. Make no mistake, the giveaway is for the benefit of the drilling and mining interests that have a lock-grip on Congress and the rest of Washington.”

Since the House is required to account for any cost associated with any legislation it considers under Congressional Budget Office accounting rules and guidelines, legislation put forward now shall skip several steps in the normal legislative process, coming up for a vote without any discussion of the costs and benefits. This means that the House does not need to render an assessment or cost analysis of estimated financial losses resulting in legislation giving away public lands or buildings.

A Democratic Congressional source on Capitol Hill told NCRM Friday that this procedural rules shortcut will apply equally to all types of public land.

“For example, the national parks like Yosemite – even federal buildings and facilities in Washington like the FBI’s J. Edgar Hoover headquarters building, could all be given away without consideration of the cost to American taxpayers.”

“The House Republican plan to give away America’s public lands for free is outrageous and absurd. This proposed rule change would make it easier to implement this plan by allowing the Congress to give away every single piece of property we own, for free, and pretend we have lost nothing of any value. Not only is this fiscally irresponsible, but it is also a flagrant attack on places and resources valued and beloved by the American people,” Grijalva said.

Federal stewardship over public lands has long been a contentious issue with Congressional Republicans and particularly with Tea Party and House Freedom Caucus members from the Western states. But in the case of Rep. Bishop, he has waged an incessant campaign to divest federal ownership of Western lands, in particular urging President-elect Donald Trump to abolish national monuments designated by President Barack Obama and former President Bill Clinton. More than 270 million acres of American land and waters are potentially at risk—an area two and a half times the size of California.

This latest maneuver by Bishop with the House rules change was met with sharp criticism from conservation and watchdog groups. One group told NCRM that the impetus for Bishop’s zeal to unload federal property could be traced to his contributors.

According to the advocacy and activist group Oil Change International which tracks campaign contribution monies from fossil fuel corporations and the coal industry via the group’s Dirty Energy Money web project, since 1999 Congressman Bishop has accepted campaign funds and contributions of more than $452,610 dollars from oil, gas and coal interests. Figures collected by Oil Change International show that greater than ten percent of that figure has come from the coal-friendly National Rural Electric Cooperative Association, which has led the fight against the Obama administration’s Clean Power Plan. Oil giants Exxon-Mobil, Chevron, and Tesoro are also listed among Bishop’s top campaign contributors.

Recent polling by the Denver, Colorado, based Center for Western Priorities showed that over seventy-five percent of registered voters in the states of Nevada, Colorado, and Montana believe public lands are an essential part of their respective state’s economies. Additionally, the Congressional watchdog agency, the Government Accountability Office, which is responsible for monitoring of the federal budget, found that leases for oil and gas drilling on public lands are one of the U.S. government’s largest sources of non-tax based revenues.

Congressional Republicans Accused of ‘Greasing the Skids’ and ‘Using Smoke and Mirrors to Hide the Cost of Stealing Away Our Public Lands’
In a statement released Tuesday after the House rules change vote by the Center for Western Priorities, which calls itself a “nonpartisan conservation and advocacy organization,” the organisation’s Executive Director Jennifer Rokala noted:

“Less than one day in and Congressional Republicans are already greasing the skids to give away or sell off America’s public lands, forests, and wildlife refuges. What’s worse, politicians are using smoke and mirrors to hide the cost of stealing away our public lands, while ripping off American taxpayers in the process.”

She added, “President-elect Donald Trump and his nominee to run the Interior Department, Montana Representative Ryan Zinke, have disavowed attempts to seize our public lands. This is their first chance to show how serious they are by standing up to attacks on our parks and public lands in the U.S. House of Representatives.”

During his presidential campaign, Trump was a vocal opponent of selling off federal lands. His Interior Secretary nominee, GOP Congressman Ryan Zinke, who serves as U.S. Representative for Montana’s at-large congressional district, has also publicly stated his opposition to efforts to dispose of public lands. During the GOP platform writing committee sessions last summer he resigned after the Republican Party platform included language that would support disposal of federal lands. He did however vote in favor of House Resolution 5 for the Rules Change on Tuesday. A spokesperson for Zinke told NCRM Friday that any statement regarding a change in his position regarding Bishop’s rule would be premature until further review and after his confirmation process as Interior Secretary.

Randi Spivak, public lands director with the Center for Biological Diversity remarked, “In Rob Bishop’s world, land owned by all Americans should be taken over by those who see them as nothing but a source of profit for drilling, mining and logging. Fortunately there are laws that protect places like national monuments—Rep. Bishop apparently doesn’t understand them or doesn’t think they should apply to his ideology.”

“If Rob Bishop has his way, where would it stop? Taking Yellowstone and Yosemite off the list of national parks?,” asked Spivak.