Residents Of South Baltimore To Sue Over Incinerator

Ongoing campaign to stop a proposed 4,000-ton-per-day trash burning incinerator because of the air pollution moves to courts

Residents of South Baltimore filed a notice of intent to sue a New York-based developer over plans to build what would be the largest trash-burning incinerator in the U.S.

United Workers and the Environmental Integrity Project notified Energy Answers that the company is violating the Clean Air Act by proposing to move forward with plans to build the plant after the permit authorizing its construction expired on May 1, 2015.

Under the federal Clean Air Act, approval to build a major source of air pollution, like the Energy Answers incinerator, expires if a company halts construction for a period of eighteen months or more.  Construction on the project stopped on November 1, 2013, which was about two years and three months ago.

Residents and advocates have been publicly calling on the Maryland Department of the Environment for six months to find that the Energy Answers permit has expired.   This means the company – if it wants to build the waste-to-energy plant – has to apply for a new permit and to hold a new round of public hearings.

Many residents of the Curtis Bay, Brooklyn, and Brooklyn Park neighborhoods closest to the incinerator site – including a student-led organization called Free Your Voice – are fighting the proposed 4,000-ton-per-day trash burning incinerator because of the air pollution that it would add to a neighborhood already suffering from toxic air emissions.

“The incinerator would add more brain damaging lead and mercury to my community which is already the most polluted in the state,” said  Destiny Watford, Curtis Bay resident and leader with Free Your Voice.  “This would violate our basic human right to live in a healthy community.”

Instead of an incinerator, the community has been pushing for more positive development alternatives that would create truly green jobs without putting residents’ health at risk. Possibilities include a solar energy farm, and recycling and composting facilities.

“The developers of this massive and polluting incinerator project are not following the federal Clean Air Act,” said Leah Kelly, attorney for the Environmental Integrity Project. “After spending six months asking the Maryland Department of the Environment for a decision to this effect, we are now notifying Energy Answers of our intent to seek a decision in a court of law.”

Energy Answers received a permit on August 6, 2010, to build the Fairfield incinerator project, and then performed some construction from August 19, 2013, through October 31, 2013.  But then the company stopped building.  According to all available information, Energy Answers has failed to resume construction since.  This means the company has far surpassed the 18 month maximum gap in activity that federal regulations describe as the maximum delay before the developers would need to obtain a new federal Clean Air Act permit from state regulators.

MDE told Energy Answers in a November 24, 2015 letter that it “had no documentation that construction activity, in the Clean Air Act sense, has occurred [on the Energy Answers facility] since October 31, 2013.”

On December 15, 2015, more than 100 protesters gathered at MDE headquarters to demand that the state nullify the expired permit for Energy Answers. “Pull the permit!” the protesters chanted, according to media reports. 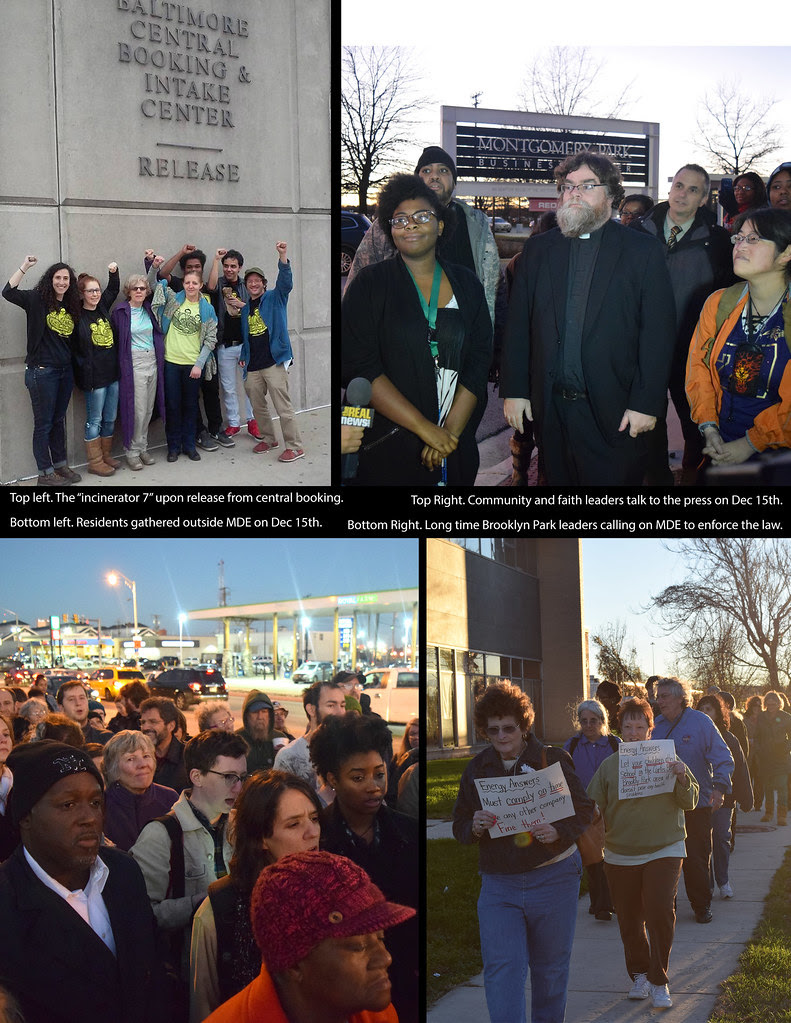 Seven of the protestors conducted a sit-in, refusing to leave the building until MDE issued a decision that the permit had expired.  In response, dozens of police officers arrived to arrest the seven protestors engaging in civil disobedience, including a local high school student and a physician who opposes the incinerator project.   The charges were later dropped.

Among those arrested was Dr. Gwen DuBois, Secretary of Chesapeake Physicians for Social Responsibility.   “In addition to increasing the likelihood of preventable premature death from air pollutants that increase the risk of respiratory illness, heart attacks, strokes and lung cancer, this facility has been permitted to emit 1,000 pounds of lead yearly, to which the immature brain is especially susceptible.  This can cause behavioral changes and loss of IQ,” DuBois said. “Yet the project sits within a mile of two schools.”

After the protest at MDE on Dec. 15, the activists returned to the state agency to drop off petitions signed by almost 2,000 people. The petitions asked the state to find the incinerator permit invalid.

Rodette Jones, a Curtis Bay resident and manager of the Filbert St. Garden, said that local residents would much prefer to see a composting or recycling plant built at the site instead of an incinerator.

“We have community-driven alternatives to the incinerator that could take our city forward with good green jobs instead of dumping more lead and mercury on us, and burning precious resources,” said Jones.

Debbie Frank, president of the Arundel Neighborhood Association, said: “We can create jobs without sacrificing our health.”