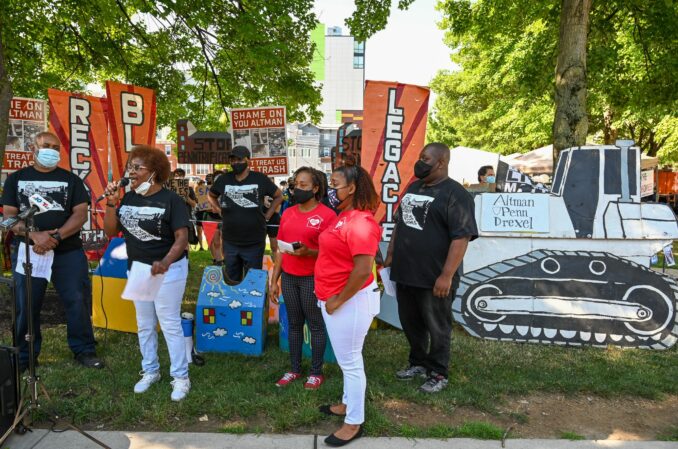 Philadelphia, Pennsylvania – Darlene Foreman, a 60-year-old Black woman and one of the UC Townhomes tenant representatives, told the assembled press on July 11: “This is a fight for the Townhomes but not only the Townhomes.” It’s for people “all over the country who are facing displacement.”

Behind her were about 50 other residents and supporters holding signs or cell phones as she continued: “I will not be displaced. . . . Me, the residents here and people all over the country are sick of it. So, if this fight takes today, tomorrow, next week, next month, next year, the year after that, then we’re gonna be out here fighting!”

In the background were about 15 tents, which were put up on the property’s green lawn after a “Protect the Block Party” July 9. Residents and housing activist supporters are taking turns staying overnight as part of the “We ain’t going nowhere” campaign, joining in the residents’ resistance.

During the press conference, organizers announced the housing center’s new name, as residents covered up the official 5′ by 5′ sign with their own new banner proclaiming “The People’s Townhomes.”

The day before, a huge white banner with black lettering was put up on the sloped roof facing 40th Street that said “Housing is a human right.”

Dominique Walker of Oakland, California-based Moms for Housing, said, “We’re here to show solidarity with the People’s Townhomes. We know firsthand what displacement looks like. In Oakland, there’s been a lot of displacement of our Black and Brown residents. We know if we don’t resist, they will continue to do this.”

Aliyah Phelps of Moms for Housing said: “That’s something that we lose when gentrification happens — that sense of community, that sense of belonging, that sense of security that’s so important. When you lose that, you end up losing other things. Mental health deteriorates, your safety net, crime, everything.”

Resident Sheldon Davids said, “This is a special place, where our children can play safely, where our elders can access nearby hospitals. The People’s Townhomes are located next to the 40th Street Station. Access to this major transportation hub is not a small thing; that is one of the reasons why we are not going anywhere!”

Housing is a human right

UC Townhomes residents and their supporters staged a “Families4Housing” march to kick off a summer of events on July 9. Their goal is to stop displacement of 68 West Philly families from the low-income housing units near the University of Pennsylvania and Drexel University, which is targeted for development by gentrifiers.

Just before the march began to form up, Philadelphia drum group Positive Movement Entertainment Drumline circled through the crowd, getting everyone’s attention with their powerful drum beats. Soon after as the march started, Krystal Strong led with chants of: “When Townhomes are under attack, what do we do — stand up, fight back!”

The marchers took a circular route that led them by the campuses. At 38th and Chestnut Streets, UC Townhomes resident Darlene Foreman started a chant as marchers blocked a trolley and automobile traffic for 15 minutes. “They’re holding up our lives; we’re holding up the traffic.”

Strong pointed out that organizers are changing the name of UC Townhomes to “The People’s Townhomes” as one lead banner proclaimed.

Back at the Townhomes, a rally stayed in the street for an hour at 40th and Market Streets. Speakers included Mother Pam, the two speakers from California’s Moms for Housing and several more residents.

Adding to the march’s visual effects, Spiral Q provided a three-fourths life-size cardboard cutout of a bulldozer, plus three tall banners that read: “Reckon with Black Legacies.” The Townhomes are located in what little remains of a historic Black community long targeted by gentrifiers.

Tip of the gentrifiers’ iceberg

Over the next five years, 37 other Philadelphia low-income housing properties face renewal of HUD contracts, including a senior high-rise across the street. Another is Center Post Village, two blocks away at 40th St. and Powelton Ave. Postering last week in the Powelton Village neighborhood where this writer once delivered mail, I was shocked by how many single-family homes had been torn down, replaced by new high-rent apartments.

Residents from these Black and Brown communities are being displaced into a housing market with fewer and fewer affordable vacancies. Many parents and seniors will have difficulty finding safe, healthy housing that offers similar amenities as their current neighborhood. According to widely published reports by Realtor.com, Philadelphia’s rental vacancy rate is well under 5%, with residents oftentimes being offered units in outlying areas with surging rates of violence and few amenities.

Back at the People’s Townhomes site, a “Protect the Block Party” continued late into the night. People danced to music by several DJs. A badminton game was set up, and children enjoyed making giant soap bubbles. Cindy Lou expertly face-painted children and adults. Free pizza, cookies, water and ice were provided to participants. The protest continued overnight with around a dozen tents set up for those who could stay.