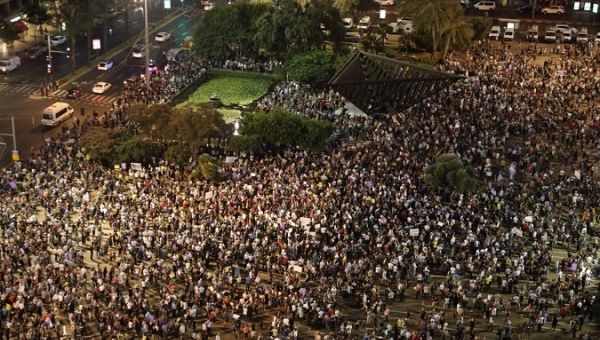 This is the second massive rally held in Israel against the controversial bill.

Thousands rallied in Tel Aviv, Israel’s capital, to reject the controversial Nationality Bill, approved by the Israeli Parliament, the Knesset, in July. The march was led by Palestinian Israelis who make up around 20 percent of Israel’s population.

The protest included the left-wing political party Meretz, legislator of the Zionist Union Micky Rosenthal, rights organizations such as Peace Now and Physicians for Human Rights-Israel, and the members of the Joint List – a political alliance of four Arab-dominated parties in Israel.

Chairman of the Joint List, Ayman Odeh, said: “Tens of thousands of Arabs and Jews are moving in large quantities on buses to Tel Aviv because today we insist on delivering a clear message – a democratic state must be for all citizens.”

On Saturday at least 30,000 demonstrators marched from Rabin square to the Plaza of the Tel Aviv Museum of Art under the banner “Abolish nation-state law. Yes to Equality.” Protesters waved Israeli and Palestinian flags, wore kufiyas, and held signs condemning the law as enshrining apartheid.

Rallying cries included “Jews and Arabs refuse to be enemies,” and “resist apartheid.”

Tens of thousands of Palestinian and Jewish Israelis are protesting in central Tel Aviv right now against the discriminatory Nationality Law pic.twitter.com/qzHZRVyzCm

Protester Omar Sultan affirmed, “this law is against us, against the Arabic language, against peace, against our future in this land.”

Mohammed Baraka of the Higher Arab Monitoring Committee warned in a speech “There will not be another Nakba. We are staying here.”

The bill has been rejected by Palestinians and members of the international community, which has called the bill an apartheid law, because it recognizes the right to self-determination as an exclusive right for the country’s Jewish majority, and downgrades the status of Arabic, from official language to “special status.”

Shortly after, prominent sectors of Israeli society, including generals belonging to the Druze Arab minority protested by leaving the army, and last week they organized a massive protest to demand the revocation of the law. The Druze community has also presented a petition to Israel’s High Court to block the legislation.

Last week’s march, which was organized by the Druze community, gathered 50,000 people.