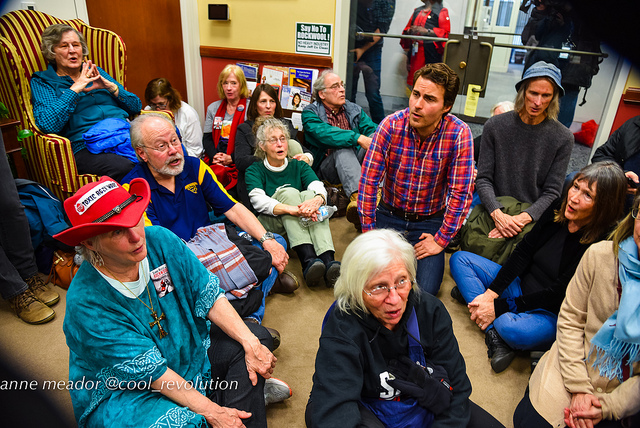 Washington, DC — West Virginia residents occupied U.S. Senator Joe Manchin’s office today to demand he take a position on a controversial factory under construction in the Eastern Panhandle. U.S. Capitol Police arrested eleven protesters when they blocked the doors and hallway outside the office.

Forty-two residents of Jefferson County, W.Va., and surrounding areas, organizing under the name “Resist Rockwool,” traveled to Washington to demand a meeting with Senator Manchin. He had just cancelled a townhall meeting scheduled later this month at Shepherd University which was to focus on the Rockwool insulation fiber plant.

A fierce opposition to Rockwool arose in Jefferson County when it became known that the Ranson factory would emit 156,000 tons of pollutants annually across the street from an elementary school. Also within a few miles of the factory site are three more schools, a VA hospital, a hospice, and daycare centers. They also fear that Rockwool may harm the existing, thriving tourism and equine industries by fouling the water and air and by marring the viewshed of the Appalachian Trail.

Opponents of Rockwool met with Manchin’s staff in October and left feeling positive, but the only action taken by the Senator was “a tepid letter” to the EPA, according to Catherine Jozwik, who presented information to Manchin aides. “We felt for the first time that we were actually listened to by one of our legislators, but then that’s followed up by months of inaction,” she said.

Manchin aides said that the senator wasn’t able to meet until after a vote on a spending bill to prevent another government shutdown. The small office soon heated up from 50 people singing songs like “Country Roads” and “We Shall Overcome” and chanting “Rockwool’s got to go!”

“We need him to firmly and unequivocally state his opposition,” said David Levine, a tech entrepreneur from Martinsburg. “We’re not leaving today until we get a firm commitment.”

They are also demanding a thorough assessment of the health and environmental impacts of the plant and stronger oversight of local boards making economic development deals. Many objections to Rockwool stem from the secrecy surrounding “Project Shuttle,” a cooperative effort between actors within state government, the Jefferson County Development Authority and the city of Ranson’s local government to subvert zoning laws and grant millions in incentives to Rockwool.

“This was the most underhanded, sleazy process, that undermined laws, regulations and rules of the road. It is a mess,” teacher Grant Prillaman said. “That is one of our demands, that Senator Manchin ask for a DOJ investigation for how this monster even got here.”

Jozwik says that the regulated pollutants that would be emitted from Rockwool—including particulate matter, sulfur dioxide, volatile organic compounds, nitrogen oxides and formaldehyde—puts 30% of the County’s schoolchildren at risk of serious health ailments. Pediatricians are weighing in and expressing concern that the “toxic properties” of the pollutants could negatively impact the health of children nearby.

“We feel that it is time for Senator Manchin to side with his constituents and not the Danish multinational corporation and say that it is not an appropriate place for such a factory,” Jozwik said. “We’re here today to say, it’s time to stop walking that line, or standing on the fence and stand with your constituents and say that you oppose Rockwool.”

Senator Manchin did not respond to the protesters’ request for a meeting after the vote on the spending bill was held. After 90 minutes of occupying the office, the protesters moved to the hallway. Eleven people participating in the sit-in were arrested when they blocked the doors of the office and were charged with obstructing and incommoding. They were released later in the afternoon.