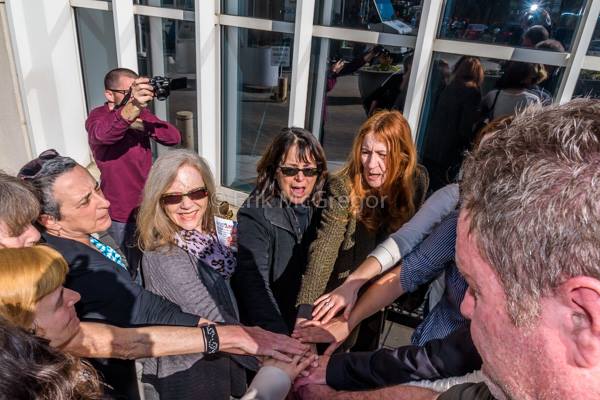 Above: ResistAIM Pipeline protesters outside of FERC after interrupting public meeting. All photos by Erik McGregor.

Washington, DC On Thursday March, 17, 2016 at 11:05 AM, ResistAIM Pipeline, a group of concerned New York State (NYS) residents, led by Nancy Vann – a Peekskill landowner whose property was taken by Spectra for pipeline construction – stood up in the monthly public meeting of the Federal Energy Regulatory Commission (FERC) to ask the commissioners why they have ignored NYS Governor Andrew Cuomo’s urgent request to immediately halt construction on Spectra Energy’s Algonquin Incremental Market (AIM) project. Governor Cuomo directed four NYS agencies to conduct an independent safety assessment of the AIM Pipeline and its proximity to Indian Point Nuclear Power Plant. The Governor told the New York Times, “​The safety of New Yorkers is the first responsibility of state government when making any decision​.”

In a further display of their disregard for public safety, FERC’s security assaulted the first speaker, Nancy Vann, forcefully removing her, and knocking her to the ground when she demanded access to the cane she needs to walk. The entire commission watched blithely during this assault and then as each of the next 12 New Yorkers was removed when they stood to ask FERC to listen to Governor Cuomo, halt construction of the AIM Pipeline, and protect more than 20 million people.

O​fficials recently discovered an exponential increase in radioactive tritium leaking into the groundwater from Indian Point Nuclear Power Plant. This leak follows six other recent safety and security breaches at the plant including several emergency shut downs over an eight month period.

The administration is urging FERC to suspend their approval of Spectra’s AIM Pipeline pending the results of the analysis, a move that could halt completion of the controversial project.

FERC’s response when reached by the press was “We will not comment on that letter.”

Spectra’s new high-pressure, 42-inch diameter pipeline would run within 105 feet of critical safety infrastructure at IndianPoint.InMayof2015,aSpectraEnergyp​ ipeline ruptured underneath the Arkansas River​;​ Spectra​ was unaware of it until the Coast Guard informed them of the rupture.

“FERC is inviting disaster by choosing to ignore the vehement warnings by scores of pipeline and nuclear safety experts, health professionals and local, state, and federal officials regarding the clear and present danger posed by the siting and construction of Spectra’s high pressure AIM gas pipeline,” says Ellen Weininger, a co-founder of Stop the Algonquin Pipeline Expansion (SAPE). “NYS Governor Andrew Cuomo just directed four state agencies to conduct an independent safety analysis and called for FERC to halt construction and withdraw its permit. FERC continues to abdicate its responsibility while the health and safety of more than 20 million people who live and work within a 50 mile radius as well as the financial center of the world, hang in the balance. Without further delay, FERC must halt the AIM pipeline construction and rescind its approval of the project.”

The pipeline is being built against the wishes of the local communities from Rockland, Westchester, and Putnam, which have all passed resolutions opposing it. In some areas Spectra Energy has used eminent domain to seize property for construction against the will of landowners and homeowners. This has outraged residents and environmental and public safety advocates who point to​ ​Spectra’s abysmal safety record​ as proof that the company cannot be trusted to construct a pipeline safely. “FERC should stop pursuing this unconstitutional process of allowing the AIM pipeline to proceed and land to be taken prior to the completion of Governor Cuomo’s risk assessment,” said Nancy Vann, a Resist AIM member and president of Safe Energy Rights Group (SEnRG).

“FERC must be made to see that it is operating in opposition to the public need and to public opinion. The idea that we need increased capacity for fracked gas, more particularly, gas destined for China and other countries, is abhorrent to me,” said Donald Gardner, a Hastings-on-Hudson, Westchester resident, “It is crucial for FERC to confront and ultimately answer the question: why extend infrastructure and a delivery system for a deadly, ultimately finite source of power, which poisons the water and air, endangers the population, is being built by the Indian Point nuclear facility, and sits atop two earthquake fault lines? What could possibly go wrong? We must start our real transition to safe and renewable fuel sources, now.”

This regulatory failure demonstrates that the agencies involved – FERC and the Nuclear Regulatory Commission (NRC) – are unwilling to consider the full impacts of this project. Congresswoman Nita Lowey and Congressman Eliot Engel wrote to FERC and the NRC saying, “…As elected representatives of residents in the Hudson Valley, we believe FERC and NRC’s primary responsibility should be to protect the health and safety of the 20 million people who live within the 50 mile radius of [Indian Point]. Despite the widespread calls for an independent risk assessment, FERC and NRC have disputed the need and instead relied on Spectra and Entergy’s calculations…we call on FERC and NRC to require Spectra and Entergy to fund an independent transient risk assessment for the AIM Project as soon as possible.”

As Spectra fast-tracks construction of the pipeline, municipalities and organizations from Boston to New York are preparing to take FERC to Federal Court to challenge the pipeline approval. Despite these numerous outstanding legal challenges, the ongoing New York State risk assessment, and Governor Cuomo’s request to halt construction, Federal law allows Spectra to proceed with construction, leaving impacted communities no recourse to address their concerns while faced with imminent harm from pipeline construction and operations.

In addition to its obvious safety and security risks, the AIM pipeline would increase our dependence on climate-changing fossil fuels at a time when the nations of the world are increasingly recognizing the need to move to renewable energy.