Franklin County, VA – In the farmlands of Franklin County, a new stand against the Mountain Valley Pipeline has begun. Three tree sits loom directly in the path of the pipeline’s destruction, making it impossible to clear the way without severely injuring the inhabitants of those trees. The sits tower over 75 feet off the ground of a small family farm’s livestock pasture, overlooking Little and Teel creeks, home to the endangered Roanoke Log Perch.

The tree sits build upon two other blockades to construction- a stand one hundred miles West, on Peters Mountain, and twenty miles West, in Bent Mountain, VA. One tree sitter stated, “The other tree sits show us that there are still effective ways to interrupt the violence of this proposed pipeline. We are celebrating their spirit of resistance in the mountains and bringing it down to the farmlands, where so much remains at stake. The fire truly is catching.” 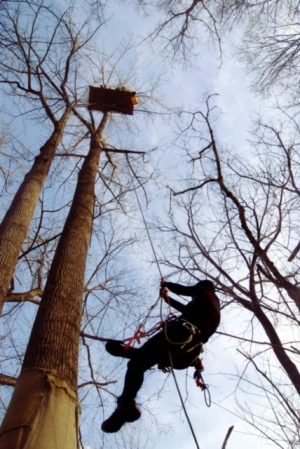 Local farmers Ian and Carolyn Reilly have been fighting the pipeline for their family’s future and to protect the soil and water. Using restorative practices, the Reilly’s are stewards of the earth. Ian Reilly said, “Launching Little Teel Crossing is an act of protection for our family’s home, land and water. This farm has been free from chemicals for decades. As farmers seeking to renew the land, we intend to keep it that way.”

MVP’s 125-foot limits of destruction cuts through several family farms in Franklin County—places where local beef, honey, poultry, and produce are cultivated. According to the Roanoke Times, Precision Pipeline, the company contracted to construct the MVP, has a history of environmental violations and lawsuits for construction of several other pipelines.

“There are too many ways this pipeline would destroy the ecosystem that preserves peoples’ livelihood here. The pipeline will not just jeopardize Virginia’s way of life, but also the food systems that so many lives depend on,” stated Carolyn Reilly. She continued, “For what? To fill the pockets of these fossil fuel fiends and corporate elites. We won’t let that happen here.”

The first stage of construction began with tree clearing in Franklin County in late March. Today, MVP security personnel taped to the trees a notice of violation of Judge Dillon’s Federal Court Order stating tree sitters “should vacate the property immediately.” The occupants of the trees at Little Teel Crossing are self-described as “young Virginians,” and are prepared to remain as long as this pipeline threatens family farms, land, and water.

Ian Reilly shared, “This is about taking a stand. This is about choosing for ourselves when the fight is over. MVP thought we would just resign when pipeline tree clearing began. But the fight has just begun and we still believe we can stop this destructive project. We will win.”

Visit the Facebook Page for updates. Donate at bit.ly/DONATE2LTC. 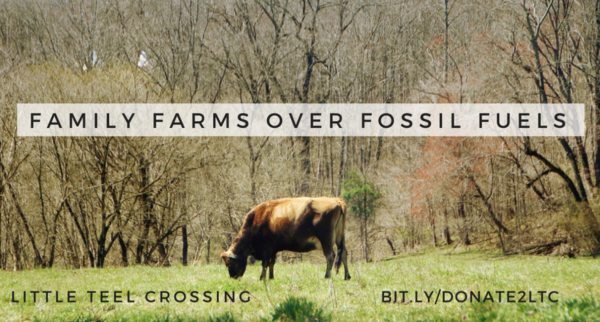