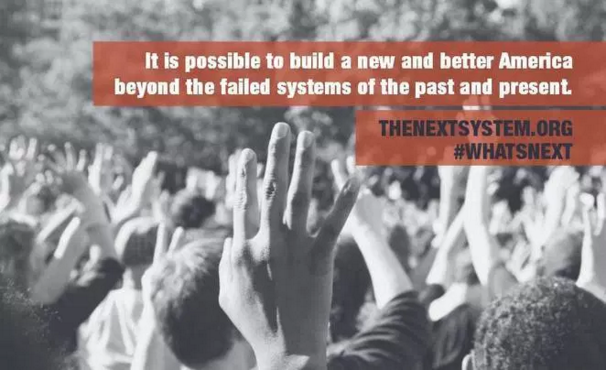 Resistance Report: From Ashes Of Capitalism The Next System Rises

There is a growing consensus that the crisis facing us across multiple fronts: environmental justice, racial justice, wealth inequality and more are both interconnected and systemic, meaning that Capitalism not only has no answers for these crisis, but these myriad crisis themselves are built into the system.

Dana Brown, the National Teach-Ins Coordinator for the Next System project, joins Dennis for an interview about the end of capitalism and navigates the “reform or revolution” framework during the height of primary season.

“an ambitious multi-year initiative aimed at thinking boldly about what is required to deal with the systemic challenges the United States faces now and in coming decades. Responding to real hunger for a new way forward, and building on innovative thinking and practical experience with new economic institutions and approaches being developed in communities across the country and around the world, the goal is to put the central idea of system change, and that there can be a “next system,” on the map.”

Also on the show today, Steve Horn of DeSmog Blog on details related to the findings that:

“Jackson Dunn, a lobbyist employed by FTI Consulting subsidiary FTI Government Affairs and a top-level campaign finance bundler for Hillary Clinton’s presidential run, lobbied throughout 2014 and 2015 for offshore drilling off the coast of Israel on behalf of Noble Energy.”

about the guests:
Dana Brown joined the Democracy Collaborative in September 2015 for the launch of the Next System Teach-Ins program. She is an activist, popular educator and human rights advocate that has worked throughout the US, Latin America and the Middle East supporting communities organized in resistance to neoliberal economic reforms and military intervention. A board member of Peace Brigades International, she maintains a foot in international solidarity, assisting projects to protect human rights defenders from Colombia to Kenya, while thrilled to be based in the US working to change our political economy for the benefit of the 99%.

Dana holds a B.A. in Sociology from Cornell University and a Masters in International Relations and Peace Studies from the Universidad del Salvador (Argentina). She is a founding member of Witness Against Torture, a movement to shut down the detention center at Guantanamo Bay and end the use of torture and indefinite detention at all US-run facilities.

Steve Horn is an Indianapolis, IN-based Research Fellow for DeSmogBlog and a freelance investigative journalist. He previously was a reporter and researcher at the Center for Media and Democracy. In his free time, Steve is a competitive runner, with a personal best time of 2:43:04 in the 2009 Boston Marathon. A graduate of the University of Wisconsin-Madison, majoring in political science and legal studies, his writing has appeared in Al Jazeera America, The Guardian, Vice News, The Nation, Wisconsin Watch, Truth-Out, AlterNet, NUVO, Isthmus and elsewhere