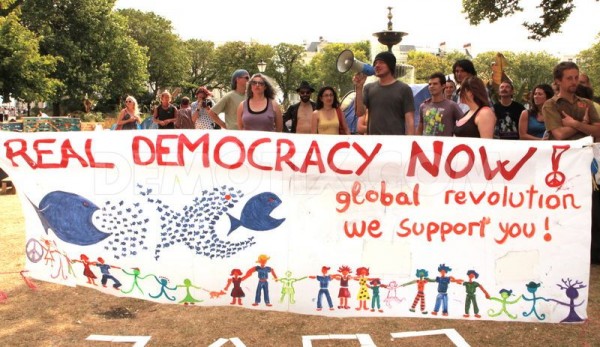 The notion of the “Deep State” as outlined by Mike Lofgren may be useful in pointing to a new configuration of power in the US in which corporate sovereignty replaces political sovereignty, but it is not enough to simply expose the hidden institutions and structures of power.

What we have in the US today is fundamentally a new mode of politics, one wedded to a notion of “power unaccompanied by accountability of any kind,” and this poses a deep and dire threat to democracy itself, because such power is difficult to understand, analyze and counter.

The biggest problem facing the US may not be its repressive institutions, modes of governance and the militarization of everyday life, but the interiority of neoliberal nihilism, the hatred of democratic relations and the embrace of a culture of cruelty.

I would suggest that what needs to be addressed is some sense of how this unique authoritarian conjuncture of power and politics came into place. More specifically, there is no mention by Lofgren of the collapse of the social state that began in the 1970s with the rise of neoliberal capitalism, a far more dangerous form of market fundamentalism than we had seen in the first Gilded Age. Nor is there a sustained analysis of what is new about this ideology.

How, for instance, are the wars abroad related increasingly to the diverse forms of domestic terrorism that have emerged at home? What is new and distinctive about a society marked by militaristic violence, exemplified by its war on youth, women, gays, public values, public education and any viable exhibition of dissent? Why at this particular moment in history is an aggressive war being waged on not only whistle blowers, but also journalists, students, artists, intellectuals and the institutions that support them?

What’s missing in Lofgren’s essay is any reference to the rise of the punishing state with its massive racially inflected incarceration system, which amounts to a war on poor minorities, especially black youth. Nor is anything said about the culture of fear that now rules American life and how it functions to redefine the notion of security, diverting it away from social considerations to narrow matters of personal safety.

Moreover, Lofgren needs to say more about a growing culture of cruelty brought about by the death of concessions in politics — a politics now governed by the ultra-rich and mega corporations that has no allegiance to local politics and produces a culture infused with a self-righteous coldness that takes delight in the suffering of others. Power is now separated from politics and floats, unchecked and uncaring.

Neoliberalism is a new form of hybrid global financial authoritarianism. It is connected to the Deep State and marked by its savage willingness in the name of accumulation, privatization, deregulation, dispossession and power to make disposable a wide range of groups extending from low income youth and poor minorities to elements of the middle class that have lost jobs, social protections and hope.

Then, there is the central question, how does the Deep State function to encourage particular types of individualistic, competitive, acquisitive and entrepreneurial behavior in its citizens?

The biggest problem facing the US may not be its repressive institutions, modes of governance and the militarization of everyday life, but the interiority of neoliberal nihilism, the hatred of democratic relations and the embrace of a culture of cruelty. The role of culture as an educative force, a new and powerful force in politics is central here and is vastly underplayed in the essay (which of course cannot include everything). For instance, in what ways does the Deep State use the major cultural apparatuses to convince people that there is no alternative to existing relations of power, that consumerism is the ultimate mark of citizenship and that making money is the essence of individual and social responsibility?

In other words, there is no theory of cultural domination here, no understanding of how identities, subjectivities and values are shaped in the narrow and selfish image of commerce, how exchange values are the only values. In my estimation, the Deep State is symptomatic of something more ominous, the rise of a new form of authoritarianism, a counter-revolution in which society is being restructured and advanced under what might be called the neoliberal revolution. This is a revolution in which the welfare state is being liquidated, along with the collective provisions that supported it. It is a revolution in which economics drives politics.

Regarding the question of resistance, I think this is the weakest part of the essay. I don’t believe the system is broken. I think it works well, but in the interest of very privileged and powerful elite economic and political interests that are aggressively waging a war on democracy itself. If there is to be any challenge to this system, it cannot be made within the discourse of liberal reform, which has largely served to maintain the system. Occupy and many other social movements recognize this. These groups have refused to be defined by the dominant media, the dictates of the security state, the financialization of everyday life and forms of representations that are utterly corrupt.

Hope and resistance will only come when the call for reform and working within the system gives way to imagining a very different understanding of what democracy means. The new authoritarianism with its diverse tentacles is the antithesis of democracy, and if we are going to change what Lofgren calls the Deep State, it is necessary to think in terms of an alternative that does not mimic its ideologies, institutions, governing structures and power relations.

Two things are essential for challenging the new authoritarianism. First, there needs to be a change in collective consciousness about what democracy really means and what it might look like. This is a pedagogical task whose aim is to create the formative culture that produces the agents necessary for challenging neoliberal rule. Secondly, there is a need for a massive social movement with distinct strategies, organizations and the will to address the roots of the problem and imagine a very different kind of society, one that requires genuine democratic socialism as its aim. Democracy is on life support in the US and working within the system to change it is a dead end, except for gaining short-term reforms. The struggle for a substantive democracy needs more, and the American people expect more.