Above photo: Stop Voter Suppression from the Union of Concerned Scientists.

Voter suppression in the 2020 election has become a topic of great concern. In reality, voter suppression has been part of US politics since the founding of the country. The oligarchs who wrote the US Constitution enabled voter suppression by not including the right to vote in it and only allowing white male property owners to vote, suppressing the votes of 94 percent of the population.

Five of 16 states had white-only voting in 1800 and after 1802, every new state, free or slave, except for Maine banned Black people from voting. In 1807, New Jersey, which originally gave voting rights to “all inhabitants,” excluded women and Black men from voting. Maryland banned Jewish people from its polls until 1828. After the Civil War expanded voting rights to Black men, the Black vote was suppressed through intimidation campaigns and Jim Crow laws. After decades of protests, the Voting Rights Act was passed in 1965 and voting by Black people increased, but in recent years suppression tactics are reducing that vote.

This year, the Republican Party and President Trump are working to suppress the votes of Black people, the working class, immigrants, and others, especially by attacking the US Postal Service to decrease mail-in voting.

The Democrats are also guilty of voter suppression as they do all they can to keep third parties off the ballot. Green Party presidential nominee Howie Hawkins explains party suppression is voter suppression because millions of people refuse to choose between two Wall Street-funded candidates and so they don’t vote. Sanders-Democrats also point to an unfair nomination process resulting in Joe Biden becoming the nominee. 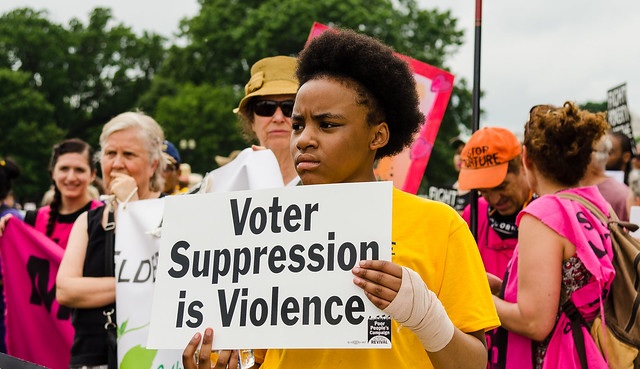 Voter suppression has gotten more sophisticated in recent elections through the massive de-registering of voters, abuse of voter ID laws, cutting the number of polling places in minority communities, felony disenfranchisement, not counting provisional ballots, and voter intimidation at the polls. In 2020, the battle over mail-in ballots and the Post Office is also a major issue.

On March 30, President Trump said in an interview on FOX, if there was high voter turnout “you’d never have a Republican elected in this country again.” Trump was explaining why he opposed more money being spent to help states conduct the 2020 election during the pandemic. More recently, Trump floated the idea of delaying the November 3 election, an idea rejected by even Republican allies and something he does not have the power to do.

Removing people from voter registration lists has become a common practice. A Brennan Center study found that almost 16 million voters were purged from the rolls between 2014 and 2016. Jurisdictions with a history of racial discrimination, which are no longer subject to pre-clearance after the Supreme Court gutted the Voting Rights Act in Shelby County v. Holder in 2013, had a median purge rate 40% higher than other jurisdictions.

Voter ID laws have become a key tool in voter suppression. The ACLU reports that: “Thirty-six states have identification requirements at the polls. Seven states have strict photo ID laws.” Over 21 million U.S. citizens do not have government-issued photo identification resulting in ID laws reducing voter turnout by 2-3 percentage points, according to the US Government Accountability Office.

This year voter intimidation is making a comeback. Trump’s response to the closing night of the DNC was to tell Fox News that on election day he’s going to send law enforcement, sheriffs, US Attorneys, and Attorney  Generals to polling locations. While Trump has no control over sheriffs and police, making the threat is part of an intimidation campaign.

Republicans are recruiting an estimated 50,000 volunteers to act as “poll watchers” in November, part of a multi-million-dollar effort to control who votes. This campaign includes a $20 million fund for legal battles as well as the GOP’s first national poll-patrol operation in nearly 40 years.

Poll watchers in some states can challenge the eligibility of voters. After the 1981 election, Democrats sued over voter intimidation and a federal “consent decree” stopped the practice but the decree was allowed to expire at the end of 2017, and a judge declined to extend it in 2018.

The ACLU points to some of the impacts of these voter suppression efforts and how they are targeted at people of color and youth, writing: 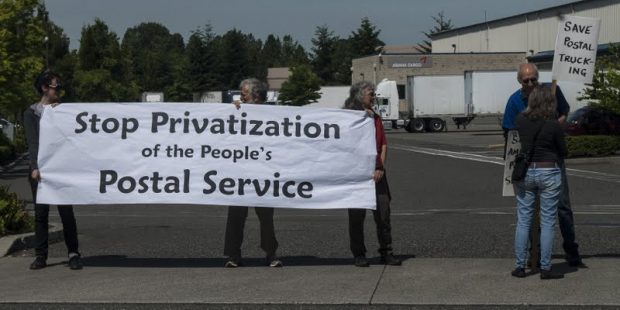 Stop privatization of the Postal Service from PostalReporter.com.

Voting during the pandemic, mail-in voting and the Postal Service

The COVID-19 pandemic has created new issues for voting in 2020. More people will be voting by mail as 20 states expanded or eased access to voting by mail as a public health measure. The election could be decided by a fight over which mail ballots are counted. One of the most common reasons for invalidating a vote is if the ballot arrives late, making postal delivery of critical importance. In the primaries, more than 540,000 mail ballots were rejected during primaries across 23 states this year, nearly a quarter in key battlegrounds for the fall, i.e. Florida, Maine, Michigan, Nevada, North Carolina, Ohio, Pennsylvania and Wisconsin.

Last week, the Democrats in the House passed $25 billion in emergency funding for the Post Office. While this is insufficient, it is opposed by President Trump. Senator Mitch McConnell may not take the issue up in the Senate, saying it is too much money and other COVID-19 relief proposals should be included in it.

DeJoy fired people with experience running the Postal Service on August 17, and twenty-three postal executives were reassigned or displaced in a new organizational structure that centralizes power around DeJoy. He stopped overtime work and mail sorting machines and mailboxes have been removed. As a result of public pressure, he  says he stopped further removals until after the election, although people are reporting finding locked mail boxes.

The Democrats, who have been complicit with the attack on the Post Office, are paying attention now that it is affecting the election. Unfortunately, their proposal falls far short of the $75 billion investment needed by the Postal Service, and doesn’t address the long term problems created by the Congress and president in 2006 when they required the Postal Service to fund 75 years worth of pension and healthcare costs.

We need to act now because they are likely to ignore the efforts at privatization of the postal service after November. We need to demand more money for the Post Office and insist on the end of any privatization of the Postal Service so it remains a public agency serving the public good. The so-called ‘Postal Accountability and Enhancement Act‘ of 2006, which was designed to weaken the Post Office, must be repealed. And, the Post Office should be given greater power to provide other services like a Postal Bank for the millions of people who do not have access to banking services.

Showing up by protesting for the Postal Service gives postal workers the power to defy the Postmaster General and speak out. Postal workers in Washington State are refusing to take mail sorting equipment offline. Postal workers have been ordered not to speak to the press so people are not aware how bad the situation is. If workers see the public is on their side, they may have the courage to speak or anonymously leak documents to the media. 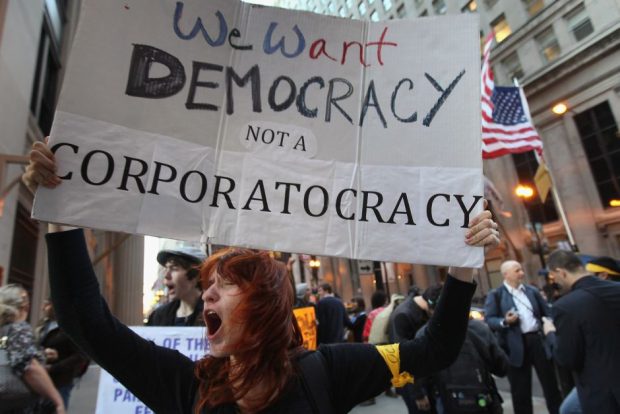 Protests in the US in 2011 targeted greed and corruption among banking and business leaders. By Scott Olson for AFP-Getty Images.

The failure of US democracy is on display in the 2020 election but these are long-term problems. The United States is not a democracy; it is a plutocracy. Elections give people the illusion of choice when in reality the power elites are the ones who choose the candidates, as we described in this 2013 article.

Some people choose not to participate in the elections for this reason. Others choose to use the election to make a point by rejecting the corporate candidates and voting for third-party candidates who support their positions, such as national improved Medicare for All, acting on climate change, ending police violence and imperialism, and more or only voting in down-ballot races.

If you choose to participate in the election, here are some actions you can take to protect your vote:

Finally, it is important to remember when we are inundated with a constant focus on the 2020 elections that the power of the people does not derive from elections. Our task is to build people’s power outside of elections.

People have the power to make the country ungovernable. Both parties are ignoring issues supported by a majority of the people, including, improved Medicare for all, a robust Green New Deal, a guaranteed basic income, a tax on the wealth to shrink the wealth divide, cuts to the bloated military budget, free college and vocational education and confronting the climate crisis, which is already wreaking havoc across the nation.

The Occupy Movement, the Fight for $15, the student debt movement, labor strikes and the uprising against police violence show people have power. We have only begun to scratch the surface of our potential. We have to build the power to rule from below, no matter who is elected president in 2020.