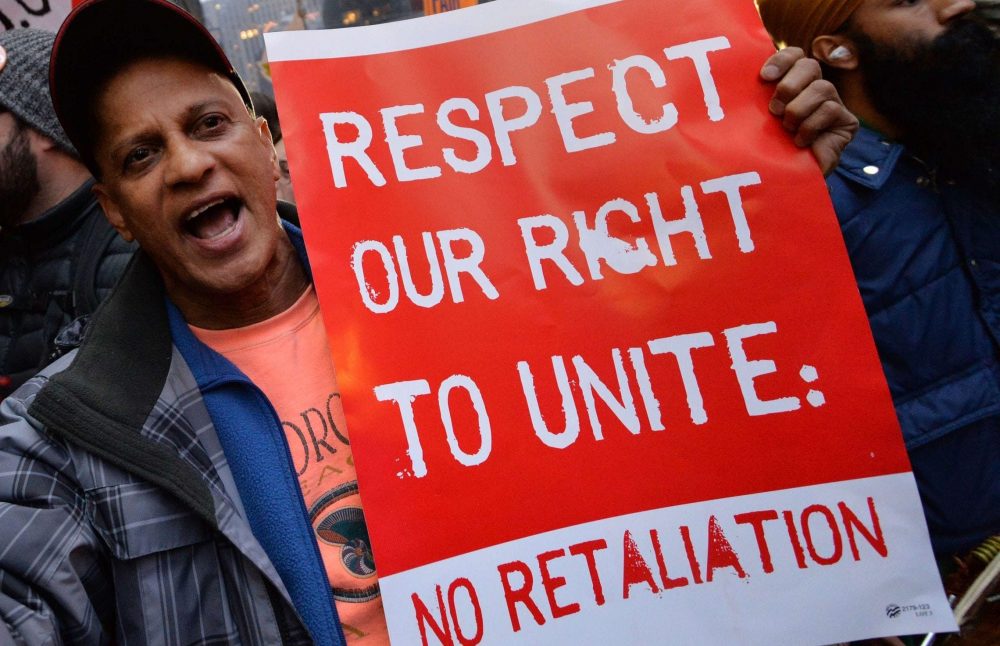 Restaurant Workers Mobilize In Right To Work States During COVID-19

For the past eight years, Johnathan Bo-o has worked on and off in the service industry, starting as a dishwasher at a restaurant in an Atlanta suburb when he was 17.

The restaurant Bo-o was serving at prior to the pandemic was better than his previous workplaces. He thought to himself, “I’m doing fine for right now.”

Bo-o, who is 25 years old, now receives unemployment benefits after losing his restaurant job due to coronavirus-related shutdowns. In Georgia, many unemployed workers are not so lucky.

Because of slightly improved work conditions, Bo-o shared, “I almost stopped questioning. I started to realize that’s not okay,” and found ShiftChange Atlanta.

The collapse of the Atlanta food and beverage industry affected around 300,000 people in the metro area alone. ShiftChange is trying to use the period before Georgia fully re-opens—a process Gov. Brian Kemp already began—to organize restaurant workers for better conditions.

ShiftChange is affiliated with the Industrial Workers of the World (IWW). The group faces an uphill battle organizing in a right-to-work state, where servers may only make $2.13 an hour. Instead of building a traditional union, the group is a loose responsive network across many restaurants.

According to Bo-o, the group of about 50 to 60 active organizers are using online tools to develop demands and plan outreach.

Like many, they use Zoom calls to replace in-person meetings. The group is creating a map of restaurants in Atlanta with frequent disputes over unpaid wages. And to grow awareness, ShiftChange members also flyer the city based on where service workers typically live. Literature is available in English and Spanish.

Rather than trying to form a legal union in a right-to-work state, Bo-o stated, “We are a volunteer organization at this point. We are less constrained by the law.” (ShiftChange members also stressed they do not have centralized authority so there is no waiting for approval before taking action.)

For example, a popular online forum for restaurant workers in the metro area censored posts after arguments broke out over restaurant re-openings. So, the network of activists started their own forum. No management allowed. A couple of hundred users migrated soon after.

The demands and methods may seem simple, but the path toward building a unionized service industry is not.

Unions in the United States typically organize by the workplace and then file for recognition with the National Labor Relations Board (NLRB). The next step is holding a vote among employees, but even if a union wins the vote, management may still refuse to negotiate.

Labor historian Bryant Simon wrote about the process of organizing Starbucks workers in his book, Everything But the Coffee. He said, “To be recognized by the National Labor Relations Board is a really hard thing to do.” It is a slow process and, while you wait for recognition, “you can be subject to anti-union tactics

Add to that the high turnover rate for workers at restaurants and bars, and the fact that workers are spread across many locations with different owners, and the challenges may seem insurmountable.

Then, there is the fear of retaliation while building support among co-workers. Restaurants are now operating with limited capacity as a precautionary measure against the spread of coronavirus. Some restaurants will not be coming back now, or at all, which means management needs fewer workers.

S.F. is an IWW organizer working with ShiftChange Atlanta. He asked to be identified by his initials after receiving threats from a restaurant owner who, S.F. joked, “has seen one too many mob movies.” A number of ShiftChange organizers were worried about retaliation if they spoke on the record about their membership.

The group, according to S.F., is focused on talking to furloughed restaurant workers about how they are holding up during the pandemic. They’re building connections through mutual aid.

“There are groups of people who want to support them in ways their employers are not,” S.F. tells workers.

In the past, owners pointed to the low-profit margins in restaurants, saying they could not afford to pay workers more. S.F. replied, “They wouldn’t be running these restaurant groups if they weren’t profiting off them. There’s a lot of room to improve working conditions.”

Activists with ShiftChange point to their past successes within the food and beverage industry. The Burgerville Workers Union defied what many thoughts was possible when it received NLRB recognition in 2018 at a third location, making it the largest fast-food workers union nationally. IWW worked with Burgerville workers, too, in their fight for recognition.

ShiftChange Atlanta is modeled off a slightly different campaign. Randal McGarry, a 31-year-old in Richmond, Virginia, worked as a front-of-house manager and server at two different restaurants a couple of years ago.

Like Bo-o and many service workers, he started in restaurants at a young age. McGarry said he has worked as a dishwasher to general manager and everything in between.

The New York Times listed Richmond as one of its top destinations, calling it a “dynamic cultural center.” Despite the recognition, McGarry and his friends were not seeing better work conditions.

One day, McGarry decided that complaining about his workplace on Twitter wasn’t enough. McGarry said, “[Service workers] all know how broke we are. So, to see a city pride itself on an industry that is built on broken backs is hard.”

Instead of participating in direct actions after receiving recognition, Richmond workers thought, “Let’s reverse that. We’ll do direct actions like work stoppages and slowdowns [first].”

“In states like Virginia and Georgia, [union recognition] gives you very little legal protection anyhow, according to McGarry” He is referring to right-to-work states, which allow workers to opt-out of recognized unions in their industry. Critics say it weakens unions and increases corporate power.

Having individual restaurants with small staffs spread across a city does not have to be a challenge to organizing, McGarry contended. “It’s not difficult to get four guys to walk out.”

In a city with many locally-owned restaurants and bars, McGarry suggested it is always worth asking for better conditions first. “A lot of time, [the owners] are more sad than angry.” But going to the boss as a unified front still requires organizing.

By keeping the network loose, the group is also nimble. When many workers were still waiting on government assistance, the group engaged in mutual aid and tried to get financial assistance for those in need. McGarry said now that unemployment insurance has started to appear in people’s bank accounts, RVA ShiftChange is distributing money to undocumented workers.

Virginia Governor Ralph Northam started re-opening the state on May 15. Yet, public health officials have repeatedly warned against ending stay-at-home orders too early, acknowledging the effects it may have on staff.

If workers choose not to return to work out of health concerns, they could lose unemployment benefits and public sympathy.

But Simon thinks the pandemic may push citizens to re-think work and how staff organizes in the workplace.

“We’ve had a spotlight on work that we haven’t seen in a while. We [now] have an appreciation of the labor of people who are so often hidden from us,” Simon concluded.

Clare Busch is a freelance journalist based in Atlanta, Ga. Her work has appeared in publications like The New Republic, Los Angeles Times, Al Jazeera, and others.