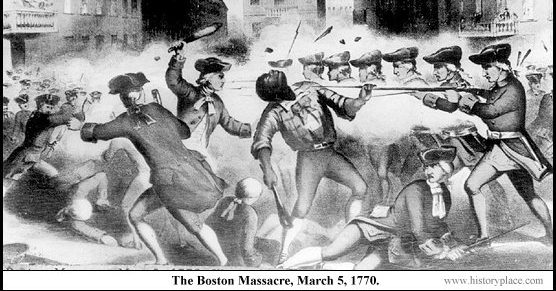 Above: Boston Massacre showing the death of the first casualty, Crispus Attucks. In reality, the vast majority of Africans in America fought against the revolution seeking to end their enslavement.

Note: This article was originally published on July 3, 2018. KZ

In Portland, Oregon, where I live, the Fourth of July holiday offers an excuse for a wonderful annual blues festival downtown in Waterfront Park. Unfortunately, in my neighborhood, it also provides cover for people to blow off fireworks that terrify young children and animals and turn the air thick with smoke and errant projectiles. Last year the fire department here reported 35 fires sparked by toy missiles, defective firecrackers, and other items of explosive revelry. The Washington State Department of Ecology warns:

Breathing fine particles in fireworks smoke can cause or contribute to serious short- or long-term health problems. They include:

Apart from the noise pollution, air pollution, and flying-debris pollution, there is something profoundly inappropriate about blowing off fireworks at a time when the United States is waging war with real fireworks around the world. To cite just one example, the Bureau of Investigative Journalism in London has estimated that since November 2001, U.S. drone attacks have killed at least 2,600 people in five countries, including as many as 247 children.

And, of course, the Iraq war, which began with the deadly U.S. fireworks of “shock and awe” bombardment in 2003, has morphed into seemingly endless internecine fighting and, according to the United Nations, the creation of more than a million refugees just this year. The pretend war of celebratory fireworks thus becomes part of a propaganda campaign that inures us — especially the children among us — to current and future wars half a world away.

But the yahoo of fireworks also turns an immensely complicated time in U.S. history into a cartoon of miseducation. For example, check out Ray Raphael’s “Re-examining the Revolution” at the Zinn Education Project, an article that every history teacher should read before wading into the events leading up to 1776. Raphael analyzed 22 elementary-school, middle-school, and high-school texts and found them filled with inaccuracies — some merely silly, but others leaving students with important misunderstandings about U.S. history and how social change does and does not happen.

Raphael offers some context for the Declaration of Independence:

In 1997, Pauline Maier published American Scripture, where she uncovered 90 state and local “declarations of independence” that preceded the U.S. Declaration of Independence. The consequence of this historical tidbit is profound: Jefferson was not a lonely genius conjuring his notions from the ether; he was part of a nationwide political upheaval.

[I]n 1774 common farmers and artisans from throughout Massachusetts rose up by the thousands and overthrew all British authority. In the small town of Worcester (only 300 voters), 4,622 militiamen from 37 surrounding communities lined both sides of Main Street and forced British-appointed officials to walk the gauntlet, hats in hand, reciting their recantations 30 times each so everyone could hear. There were no famous “leaders” for this event. The people elected representatives who served for one day only, the ultimate in term limits. “The body of the people” made decisions and the people decided that the old regime must fall.

Raphael concludes, “Textbook authors and popular history writers fail to portray the great mass of humanity as active players, agents on their own behalf.” Instead, textbooks credit Great Men — Washington, Franklin, Jefferson — and render all others as “mere followers.”

And there is a lot more that complicates the events surrounding the Fourth of July and the Revolutionary War. Raphael notes:

Not one of the elementary or middle school texts [I reviewed] even mentions the genocidal Sullivan campaign, one of the largest military offensives of the war, which burned Iroquois villages and destroyed every orchard and farm in its path to deny food to Indians.

The Expedition you are appointed to command is to be directed against the hostile tribes of the Six Nations of Indians, with their associates and adherents. The immediate objects are the total destruction and devastation of their settlements, and the capture of as many prisoners of every age and sex as possible. It will be essential to ruin their crops now in the ground and prevent their planting more. …

[P]arties should be detached to lay waste all the settlements around, with instructions to do it in the most effectual manner, that the country may not be merely overrun, but destroyed.

Those are the orders of a war criminal.

Nor do texts mention the indigenous resistance movements of the 1780s in response to American “settler” expansion, which Raphael calls “the largest coalitions of Native Americans in our history.”

On a recent episode of Democracy Now!, Gerald Horne, author of The Counter-Revolution of 1776: Slave Resistance and the Origins of the United States of America, points out that more enslaved Africans in the American colonies fought with the British than with the American colonists. Horne told Democracy Now!hosts Juan Gonzalez and Amy Goodman, “It makes little sense for slaves to fight alongside slave masters so that slave masters could then deepen the persecution of the enslaved.”

Included at the Zinn Education Project site is a link to a video of Danny Glover performing one of history’s most passionate denunciations of U.S. racism and hypocrisy, Frederick Douglass’ “The Meaning of July 4th for the Negro,” at one of Howard Zinn’s remarkable “The People Speak” events. Douglass delivered the speech on July 5, 1852, in Rochester, New York, at a Declaration of Independence commemoration:

What, to the American slave, is your 4th of July? I answer; a day that reveals to him, more than all other days in the year, the gross injustice and cruelty to which he is the constant victim. To him, your celebration is a sham; your boasted liberty, an unholy license; your national greatness, swelling vanity; your sound of rejoicing are empty and heartless; your denunciation of tyrants brass fronted impudence; your shout of liberty and equality, hollow mockery; your prayers and hymns, your sermons and thanks-givings, with all your religious parade and solemnity, are to him, mere bombast, fraud, deception, impiety, and hypocrisy — a thin veil to cover up crimes which would disgrace a nation of savages. There is not a nation on the earth guilty of practices more shocking and bloody than are the people of the United States, at this very hour.

Douglass delivered his speech four years after the United States finished its war against Mexico to steal land and spread slavery, five years before the vicious Supreme Court Dred Scott decision, and nine years before the country would explode into civil war. His words call out through the generations to abandon the empty “shout of liberty and equality” on July 4, and to put away the fireworks and flags.

In the spirit of Frederick Douglass, the Zinn Education Project urges teachers to use July 4 as a time to rethink how we equip students to reflect on the complicated birth of the United States of America.