Monroe County, WV — On Tuesday, July 31, a West Virginia grandmother halted construction of the Mountain Valley Pipeline (MVP) by blockading herself in a 1971 Ford Pinto elevated off the ground at a pipeline work site. The blockade is being carried out by 64-year old local resident, author, retired schoolteacher, and grandmother Becky Crabtree on the section of pipeline easement that is ravaging the land her family lives on in Monroe County. Banners at the site read “Defend What You Love” and “Resist All Pipelines;” messages on the Pinto include, “Power to the People” and “The Fire is Spreading.” Local residents and protesters have begun to gather on site scene in support of the blockade. 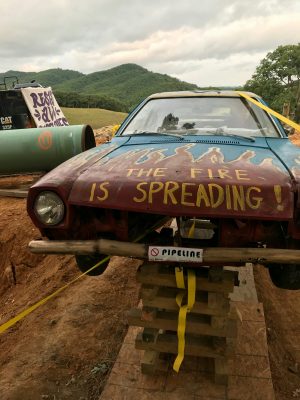 “I have talked to elected officials, signed petitions, written letters, submitted reports, and gone to court. I have exhausted the ‘usual’ methods of fighting injustice and have gotten no relief,” stated Becky Crabtree. “Officials have failed us in this fight; we need to fight for ourselves and each other.” The Pinto used in today’s action has sentimental significance for Becky, as it has been in her family since 1971 and it is the car she took on her honeymoon.

Virginia resident Doug Chancey stated his support for Becky’s action. “There is clear scientific proof that we do not need to rely on fossil fuels for energy. The need to make other energy sources available is urgent, and since the fight in the courts is slow and the pipeline work continues, direct action is necessary to halt construction until the weight of public opinion, fallen stocks, and court decisions sink this project.”

The Mountain Valley Pipeline is a 42-inch diameter fracked gas pipeline that has been met with determined opposition since it was proposed over four years ago. Impacted residents have fought the pipeline with a variety of tactics, including a nonviolent direct action campaign that escalated when construction started earlier this year. In the past 6 months, pipeline fighters have delayed construction by erecting aerial blockades and by locking themselves to construction equipment. The property that the Crabtree family inhabits and cares for is located at the base of Peters Mountain, just a couple miles from the site of a tree sit blockade near the Appalachian Trail that prevented tree clearing for 95 days this spring.

On July 27, MVP experienced yet another setback when a 4th Circuit U.S. Court of Appeals cancelled the permit that had allowed the pipeline to be built in the Jefferson National Forest. Although this decision was a small but important victory in the fight against the pipeline, it does not affect privately held land including the Crabtree’s, which was condemned by eminent domain after the family refused to sell. 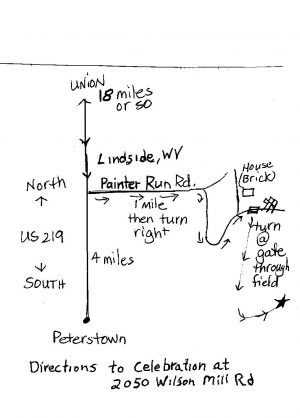 Location is off Rte 219 between Peterstown and Linside, WV.  It is about 18 miles south of Union, WV and 4 miles north of Peterstown.

From the north take Painters Run Rd on the left.  Go about a mile up until you hit Wilson Mill Rd on the right. Follow this road uphill until a bend with a brick house ahead of you.  There will be a gate on the right, go into the field and look ahead for pipeline easement and celebration.

If one route is rendered inaccessible, try the other, both roads are on the Peters Mountain side of 219.  Address is 2050 Wilson Mill Rd Peterstown, WV.