Study: Return To Work Not Affected By $600 Unemployment Boost

There’s no relationship between expanded Unemployment Compensation payments and individuals’ likelihood of returning to work, according to two recent studies. One, by researchers at Yale University, finds that more generous UC payments are not related to lower rates of return to work. Another shows employers saw no overall decline in the number of applicants per job vacancy as a result of the increased payments.

The findings refute the assertion by some pundits and politicians from both parties who claim the additional $600 weekly payment to laid-off workers established by Congress in March is a “disincentive to return to work.” Some have used that disproven argument to push for an elimination or reduction in the payment, known technically as Federal Pandemic Unemployment Compensation, or FPUC

In fact, increased unemployment compensation has already pumped $896 million into Maine’s economy, supporting jobs and additional local spending. Those calling for an end to the extra payment could well see their demand backfire, with tens of thousands of Mainers having less money in their pockets to spend.

Experts agree: Benefits should be extended

The recent studies add weight to a growing chorus of economists who recommend extending the current payments. In June, Federal Reserve Chair Jerome Powell emphasized the importance of continued federal aid for the unemployed. Last week, former Federal Reserve Chairs Ben Bernanke and Janet Yellen made a similar recommendation to Congress, as a means of supporting the economy at large.

FPUC is scheduled to cease on July 31 unless Congress extends the program. Republicans in the US Senate have proposed cutting the additional weekly benefit to just $200 per week, a move that would increase existing hardships faced by unemployed Mainers.

State-level data suggests that Maine workers are returning to work when given the chance. Both the official unemployment numbers, and the unemployment insurance claims numbers have shown steady improvement since the initial spike in joblessness in March and April. 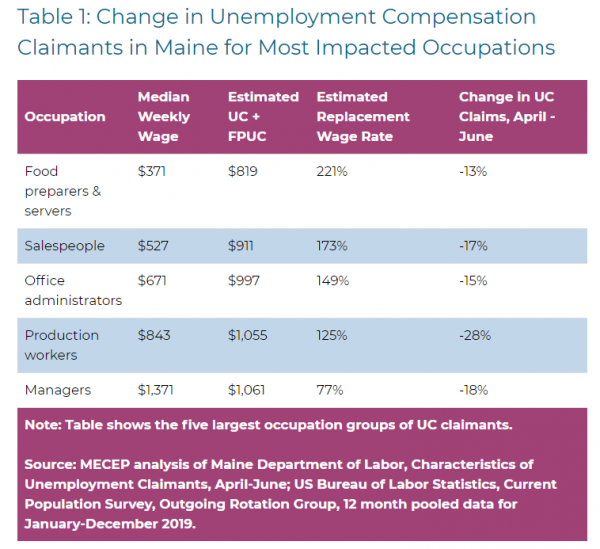 Return to work driven by consumer demand and safety, not benefit size

During this pandemic recession, joblessness is driven by the ongoing public health crisis and a slump in spending. The level of economic activity in a sector — driven in part by how safely that activity can be conducted as COVID-19 continues to spread — appears to determine whether laid-off workers return to their jobs.

This is illustrated by the three industries with the largest numbers of UC claimants (see table 2). All three of these sectors have high average wage replacement rates, with large numbers of workers receiving larger UC payments than their usual wages. Despite these similarities, the rates of return to work are very different. Health care and o”>retail workers are returning to their jobs much more quickly than food and accommodation workers. This reflects the fact that while restaurant or hotel spending in Maine remains very low, retail sales are recovering much faster, and health care spending is bouncing back. 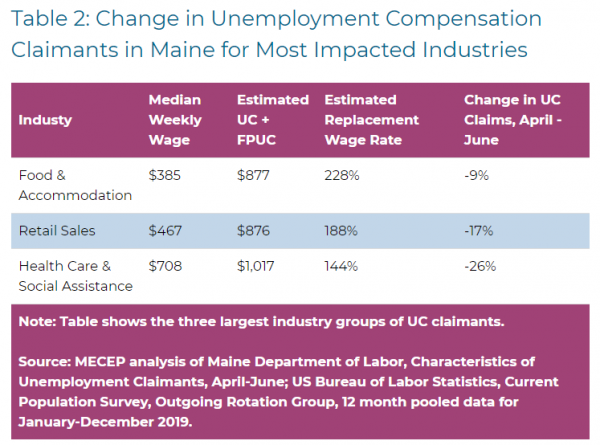 It’s clear that the current expansion has not substantially kept Mainers from returning to work. Instead, the pandemic and the associated decline in consumer spending is keeping businesses from hiring workers. The FPUC payment is actually helping to support the economy. Not only does it prevent material hardship for tens of thousands of former workers and their families, but the federal spending has been critical for propping up the Maine economy, ultimately creating jobs. Congress must authorize a continuation of the FPUC payments as soon as possible, and continue the payments for as long as the public health and economic situations require.