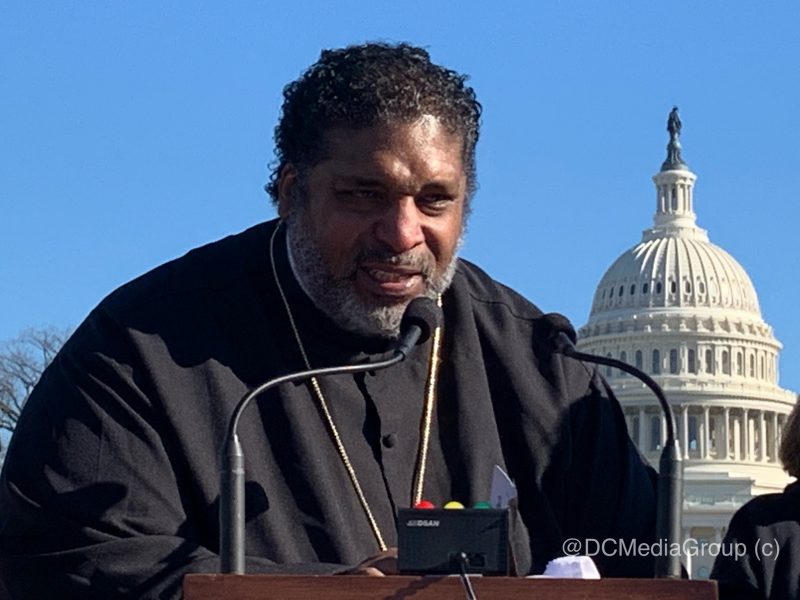 Washington DC — Community organizers and faith leaders from 33 States converged on the U.S. Capitol to demand passage of the John Lewis Voting Rights Advancement Act (H.R. 4) and the Build Back Better Bill (H.R. 5376), now pending Senate approval. They chastised West Virginia Senator Joe Manchin for his role in delaying passage of the legislation which would provide protection for voting rights and financial relief for millions of impoverished Americans.

Reverend William Barber called out Senator Joe Manchin by name for playing a “trick” on his constituents by delaying a vote in the Senate on the voting rights bill. Barber said that by delaying the vote until March it would give State legislatures time to gerrymander districts and allow passage of more restrictive voting laws. He acknowledged the voting rights act had some good provisions but for the first time in the nation’s history, it would mandate voter identification at the poles.

“We are here today to say to the Senate and the White House that they must pass voting rights protection, not in January, not in March 2022, They’ve had the entire year to do it and they haven’t gotten it done and its time to get it done now,” said Barbara Arnwine, President of Transformative Justice Coalition, and an internationally recognized human and civil rights leader.

Arnwine has been heavily involved in supporting voting rights nation wide for over 20 years and was a founder of Election Protection, the nation’s largest nonpartisan voter protection coalition, according to her website. Election Protection is a coalition of 100s of groups lauched in 2004 to assist historically disenfranchised persons to exercise the fundamental right to vote.

Other community organizers were more blunt in their criticism of Senators responsible for delaying voting rights legislation, especially Joe Manchin. Catherine Jozwik, a community organizer from West Virginia, said Joe Manchin had a history of putting corporate interests before his constituents.

“I represent the thousands of West Virginians who are tired of being ignored and poisoned by Manchin and his corporate overlords. You should stand with the ordinary people of West Virginia and the country,” she said. Jozwik described how Senator Manchin “did nothing [while] Rockwool, a Danish company wanted to export its polution from Denark to the U.S. by building a coal and fracked gas fueled factory directly across the street from a Title I elementary school.”

Jozwik told how the residents of Jefferson County fought the Rockwool project while Senator Manchin ignored their requests to intervene. They visited his office to meet with him but he did not show up.

Maryanne Smith, an organizer from Oklahoma, told how the Build Back Better Bill would help many impoverished children get healthcare they need. “Even though Oklahoma citizens voted to expand medicare in 2020, our politicians have yet to abide by the people. This affects thousands of children who need and deserve this legislation,” she said.

Other speakers told of homelessness and deteriorating economic conditions in their communities due to stagnant wages. They also urged passage of the legislation as a moral imperative.

As the speakers finished the Moral Monday Marchers slowly walked while singing the same songs sung during the civil rights marches of the 1950s and 1960s. Voting rights and economic challenges communities faced then are the same as those faced today.

As faith leaders and marchers blocked Pennsylvania Avenue, U.S. Capitol Police moved in to arrest them. Reverend Barber asked the marchers to pray for the moral conscience of the police leadership for arresting those fighting for the good and better conditions in their communities while having allowed the January 6, 2021 insurrectionists to rampage through the U.S. Capitol.

On January 6, 2021, there was not one arrest on a day that resulted in five dead and scores of police injured and maimed. On December 13, this day, several dozen faith leaders and community activists were arrested on misdemeanor charges of obstruction.