(Reuters) – Charlottesville authorities failed to protect public safety and free speech during a white nationalist rally over Confederate statues that turned deadly in the Virginia college town in August, an independent review said on Friday.

The violence between counter-protesters and white nationalists, who were outraged by the city’s plan to remove a statue of Confederate General Robert E. Lee, marked an eruption in tensions over the symbols of the Civil War’s losing side.

A 32-year-old woman was killed when a car plowed into a group of counter-demonstrators.

Friday’s three-month review by former U.S. attorney Timothy Heaphy faulted law enforcement agencies for breakdowns in planning and coordination as well as a timid response that led to “disastrous results.”

“The city was unable to protect the right of free expression and facilitate the permit holder’s offensive speech,” said the report commissioned by Charlottesville officials to address criticism of the response to the Aug. 12 “Unite the Right” rally.

“This represents a failure of one of the government’s core functions — the protection of fundamental rights.”

Charlottesville police declined to comment. The Virginia State Police said in a statement that they spent weeks planning but it was difficult to account for every circumstance.

City Manager Maurice Jones said in a statement he did not agree with all of the findings but was “profoundly sorry” for falling short of expectations. He said the city was developing a plan to address the issues. 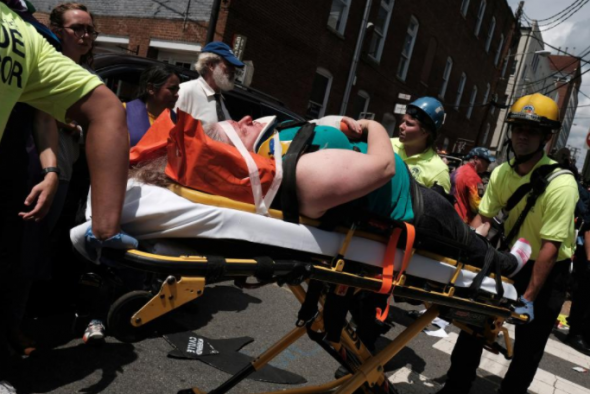 FILE PHOTO: Rescue workers transport a victim who was injured when a car drove through a group of counter protesters at the “Unite the Right” rally Charlottesville, Virginia, U.S., August 12, 2017. REUTERS/Justin Ide/File Photo

Residents of Charlottesville, home to the University of Virginia, demanded answers about the violence. Other cities across the U.S. South have since acted to remove monuments to the Confederacy.

Heaphy, whose team interviewed 150 people, said no police officer he spoke to felt good about what happened.

Officers were not properly trained or deployed, Heaphy said. State and city police used different radio systems during the rally so they could not communicate effectively.

Heaphy said Charlottesville wrongly believed it could not ban protesters from carrying items such as clubs and shields, and city and state police took too passive an approach when clashes broke out.

“Despite clear evidence of violence, police consistently failed to intervene, de-escalate, or otherwise respond,” the report said. “These shortcomings contributed to a chaotic series of events that led to violence and death.”

Among the recommendations made by Heaphy’s team were that authorities should react more quickly to violence, as well as communicate better with the public before and after such events.

Thomas said on Friday he was committed to implementing the report’s recommendations.

“It’s not a time for finger-pointing. It’s a time to come together,” he said in comments reported by CNN.