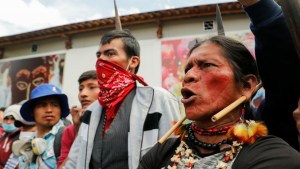 Reviewing The Crisis In Ecuador: An Indigenous Perspective And The Uncertainty Of The Future

The indigenous communities are meeting in assemblies to debate the uprising they led in Ecuador. Have they achieved their objectives? What is their balance? Sputnik was in the community of Cochapamba, where they were able to talk to the protagonists.

The community of Cochapamba located in Pichincha, two hours from Quito and at an altitude of 3,800 meters (over 12,000 feet), is in assembly. Quechua is spoken with a few words in Spanish, and it is done with strength, reflection, pain and will. It is the first space for collective debate after the days and nights of protests and mobilizations in Quito. Seven people who were wounded are not able to participate.

Here the first action was on Friday, October 4 at dawn when they decided to cut the Pan-American Highway, where the trucks pass with merchandise. It had been three days since the president of the country, Lenin Moreno, had announced the economic adjustment measures, and there had already been two days of work stoppage led by the transport sector. The country was under a state of emergency decreed by the government.

The blockade took place at 1:00 a.m., led by several communities of the Cangahua parish, among them that of Cochapamba. At 5:30 a.m. that morning a military truck arrived and the repression began. “We had to react as young people from the community,” says communicator Juan Tandaiamo, who witnessed the moment. From then on a resistance to a repression began that did not stop until the agreement between the government and the indigenous movement was signed that was televised on Sunday, October 13.

That same October 4, three more buses arrived with military personnel, “they were in full repression mode, there were women with children, people of the third age, we were simply demanding our rights.”

This violence of the public force was not televised, the young people of the community transmitted it through social networks. The day the repression began, it became clear that the large Ecuadorian media were not on the side of the indigenous movement.

“There is national communication that lies to us, it doesn’t give the truth of what we live here in the communities; the media in Ecuador doesn’t honestly show what is going on,” says Juan.

They stayed on the road for three days until they began their march towards the capital. “The meeting was held; as a people, communities, we made the decision to take a commission to Quito, one part remained and the other was walking,” he says.

It took two days to get there. This mobilization by highways took place simultaneously from many points of the country, from the mountains, the coasts, the jungles, until more than 20,000 men and women from the indigenous movement arrived in the capital on Tuesdays and Wednesdays October 8 and 9.

“The city has supported us by giving water, food, that’s not so bad,” says Miguel Farinango, who, like Juan, is in the extraordinary assembly of his community to evaluate the days of mobilization and the outcome of the negotiations. In Quito they stayed at the universities that opened their doors to them while they faced the greatest repression they can remember.

Farinango, for example, had been in previous indigenous uprisings, such as in 2005 and 2000. “It has never felt like it does now, it has been felt throughout the town, the roads that enter the community have all been blocked, it has been the greatest mobilization we have ever made,” he says. His son has been injured “in four parts,” he says.

The government’s response in Quito was increasingly violent. “In recent times there has been no such repression by the public forces, this was a total violation of human rights, that has been very serious for our people,” says Ricardo Ulcuango, president of the community, who is in charge of the extraordinary assembly, which deals with issues and rights of speech.

“The resolution in the assembly is a total rejection of the repression, of the government and of the authorities that have carried out the repression,” he explains.

For his part, Pacha Cabascango, an indigenous leader from a nearby community, describes the days in Quito with the impact still being felt, “what happened was beyond imagination, the subject of repression and the harshness of the government was brutal, we continued despite the strong blows on the head and heart, there was a war, we were going with all the strength, the resistance, the organization, but we were facing arms.

The agreement between the indigenous movement and the government had as its central point the repeal of one of the main claims against the adjustment measures: Decree 883, which removed the gasoline subsidy.

“It was a measure to favor the bankers, the big businessmen. The mobilization of the people has caused the government to retreat; the people do not accept the neoliberal policy that seeks to implement the adjustment measures in agreement with the International Monetary Fund (IMF), which affect the workers, women, the population, especially the poor of the country,” Ricardo points out.

The impact on indigenous communities, who live primarily from agriculture as is the case in Cochapamba, was going to be immediate and meant renting a tractor, for example, would increase from 18 to 40 dollars. A similar increase was going to occur in the price of inputs for planting, for transporting food to markets, not only for the rural sector but for all the people in the most vulnerable social stratas. Miguel Farinango’s son is in the university and after studying he has a job that is not that of a peasant, “We don’t agree that the basic salary should decrease because our children will be working in a while, we don’t agree that they should work more days and more hours for less money.

That is why the mobilization was not only against decree 883 but for the set of measures agreed with the IMF, among which, for example  the labor reform, which should be sent to the National Assembly by the Government. The repeal of one part, was achieved, but other parts are still missing

In Cochapamba they know that what was achieved has no guarantee, there is no trust in the government and the alert is being maintained.

“We still don’t feel calm, the government and the businessmen don’t agree with the repeal, maybe they continue attacking the leaders and the people, so we are on hold to continue with uprisings, demonstrations, we don’t have confidence, they can make other economic measures and that will come down to affect us”, says Miguel.

The body is now negotiating to agree on a new measure between the Government and the Indigenous movement to replace Decree 883. They are waiting and ready to fight again. The days of protest both on the Pan-American Highway and in Quito have left an indelible example among the people.

“We have realized that in Ecuador we are here to unite, to react, so that our rights are respected,” says Juan and raises another more important issue in his perspective; the presidential elections to come, in 2021:

“We will see what profile we need, we come from years of struggle, each government has done many things to us and we have endured them but this time we see ourselves different, as people, nationalities, united with the poor and marginalized people, deserving a government that defends our rights.

“There are many indigenous people prepared, who have studied, we have the intelligence and we can govern the country,” he added.

The mobilization that shook Ecuador is not over yet. A first confrontation has taken place against a government that has proved, to the majority of the population, to be a defender of the interests of businessmen, bankers. In the community of Cochapamba, as well as in the indigenous movement as a whole, it is clear to them that, as Miguel says, protesting is one of the main ways to defend oneself, “It is up to the poor people to stand up and demand. They have done it and they would do it again, they all say that.