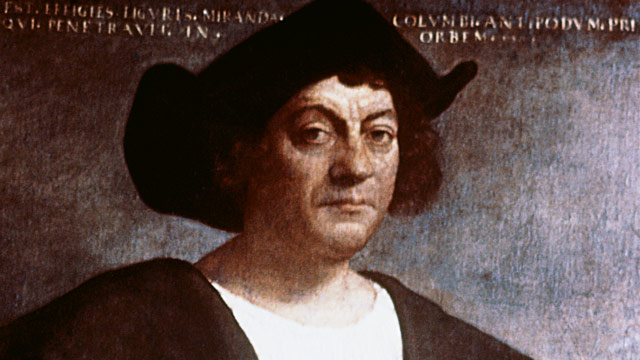 The truth taught below through the distortions of history around Christopher Columbus is the reality of revisionism vs. reality. The distortion of reality is a lesson that could be applied to most of US history.  Americans are taught a slanted view of history.  Rarely is the concept of US Empire discussed in our nation’s schools despite the fact that the US is the largest empire in world history.  No detail is provided on the realities of slavery, the ethnic cleansing of Native Indians, the mistreatment of workers or the second class citizenship of women; or the slaughter of people across the globe to create US Empire.  The hiding of truth through revisionism is not only seen in history books, it is seen in daily newspapers, heard on the radio and on television.  The US is a myth filled country where citizens have to make a conscious effort to find the truth.  The lesson of the Columbus myth is one example among many.

Regarding the painstaking process of historiography, someone of relative importance once remarked, “History is written by the victors.” A statement which echoes Plato’s dictum that, “those who tell the stories also hold the power,” its modern source is unclear. Still, many do not hesitate to attach these words to Winston Churchill, Britain’s renowned Prime Minister during the Second World War. Considering Churchill’s own history — born into an aristocratic family; his grandfather the 7th Duke of Marlborough; his father, Lord Randolph Churchill, a wealthy British statesman; his mother, Jennie Jerome, an “American socialite,” herself the daughter of a financier, speculator, and mass landowner — and the fact that he made an early living overseeing the mass killing of indigenous Africans and Indians located everywhere from Bombay to Sudan to South Africa, such a statement would hardly come as a surprise. If “victory” is defined in terms of deploying one’s immense privilege — whether socioeconomic, “racial,” or national — to enslave, oppress, and murder others who lack such privilege in order to maintain that very system for oneself and generations to come, then Winston Churchill was certainly one of history’s “victors.”

The act of whitewashing history — whether literally through the domination of Eurocentric perspectives, or figuratively through blatant omission and revisionism — is certainly common practice. It is the “victors” main tool in shaping history. Historical revisionism has been defined as “a consciously falsified or distorted interpretation of the past to serve partisan or ideological purposes in the present;” “a collective task in a nation’s cultural development, the full significance of which is emerging only now: to redefine a nation’s status in a changing world;” or the act “of ‘truth-seekers’ finding different truths to fit the needed political, social, or ideological context.” In the United States of America, such revisionism becomes immediately apparent when one steps into a public school classroom — where histories of indigenous genocide and human enslavement are, at best, minimized; and, at worst, utilized to stroke a false sense of superiority and exceptionalism; and where the perpetrators of these crimes against humanity are magically transformed from conquerors to “explorers,” from murderers to “adventurers,” and from slave masters to “patriots” and “founding fathers,” all in the stroke of a pen or the voice of a lecture.

– The first based in quasi-fiction, informed on selective data and historical accounts from either the actual “victors” or the direct beneficiaries of the perceived “victory;” and one that enjoys unquestioned dominance through manipulation and a process of layered assimilation where commonly accepted “knowledge” is constantly reproduced through academia and seamlessly delivered to its intended audience.

– The second based in reality, informed on factual data and historical accounts from not only the “victors,” but also from the supposed “losers;” and one that faces almost certain or near-extinction through numerous acts of manipulation and/or omission which are carried out over a number of years, decades, or even centuries.

Historiography is the proving ground for this ongoing struggle between revisionism and reality. The ruling classes deploy their army of “traditional intellectuals,” born and bred of privilege and churned through the most prestigious schools and universities, to protect the dominant ideology through a sophisticated presentation of revisionism. The working classes, struggling to maintain actualities, look upon their own ranks to create a semblance ofreality as the torchbearers of truth. Hanging in the balance is the direction of society: towards continued polarization, inequities, and dehumanization; or towards a sense of being – something that cannot be realized without truth.

Revisionism gives us Columbus Day; a federal holiday “in commemoration of Christopher Columbus’s historic 1492 voyage,” for which, in 1934, the U.S. Congress “duly requested the President proclaim the second Monday of October of each year as such”

Reality gives us Indigenous People’s Day; “a holiday celebrated in various localities in the United States, begun as a counter-celebration to Columbus Day, with the “purpose of promoting Native American culture and commemorating the history of Native American peoples.”

Revisionism gives us the following announcement from the White House: “When the explorers laid anchor in the Bahamas, they met indigenous peoples who had inhabited the Western hemisphere for millennia. As we reflect on the tragic burdens tribal communities bore in the years that followed, let us commemorate the many contributions they have made to the American experience, and let us continue to strengthen the ties that bind us today.”

Reality gives us the words of Columbus himself: “(The natives) are so naive and so free with their possessions that no one who has not witnessed them would believe it. When you ask for something they have, they never say no. To the contrary, they offer to share with anyone.”

Revisionism gives us the words of Michael Berliner of the Ayn Rand Institute: (Western civilization) brought “reason, science,self-reliance,individualism, ambition, and productive achievement” to a people who were based in “primitivism, mysticism, and collectivism,” and to a land that was “sparsely inhabited, unused, and underdeveloped.”

Reality gives us yet another dispatch from Columbus: “I promise this, that if I am supported by our most invincible sovereigns with a little of their help, as much gold can be supplied as they will need, indeed as much of spices, of cotton, of mastic gum, also as much of aloes wood, and as many slaves for the navy as their Majesties will wish to demand.”

Revisionism gives us this official statement from the U.S. government: “In the centuries since that fateful October day in 1492, countless pioneering Americans have summoned the same spirit of discovery that drove Christopher Columbus when he cast off from Palos, Spain, to pursue the unknown. Engineers and entrepreneurs, sailors and scientists, explorers of the physical world and chroniclers of the human spirit — all have worked to broaden our understanding of the time and space we live in and who we are as a people.”

Reality gives us Columbus’ words: “They (the Arawak Indians) brought us parrots and balls of cotton and spears and many other things, which they exchanged for the glass beads and hawks’ bells. They willingly traded everything they owned…. They were well-built, with good bodies and handsome features…. They do not bear arms, and do not know them, for I showed them a sword, they took it by the edge and cut themselves out of ignorance. They have no iron. Their spears are made of cane…. They would make fine servants…. With fifty men we could subjugate them all and make them do whatever we want.”

Revisionism gives us this:

Reality gives us this:

The “whitewashing” of history has an intended purpose -to control information and knowledge, to keep the “huddled masses” ignorant, and to maintain the status quo. The Churchills of the world and their keepers would have it no other way. For if history were reality-based, the immense wealth and power they have enjoyed and continue to enjoy — of which has been accumulated through the stolen resources of indigenous peoples, and multiplied on the backs of the enslaved, the imprisoned, the working classes and the peasantry – would cease to exist. If history were reality-based, the hierarchical systems that keep this illegitimate wealth and power intact, and the government watchdogs that protect these systems, would cease to exist.

On this day, reality begins with recognizing the real consequences of Christopher Columbus’ “expeditions,” which continued far beyond the hallowed year of 1492. “In 1493, Columbus returned with an invasion force of seventeen ships, appointed at his own request by the Spanish Crown to install himself as ‘viceroy and governor of [the Caribbean islands] and the mainland’ of America, a position he held until 1500,” explains Ward Churchill. “Setting up shop on the large island he called Espa-ola (today Haiti and the Dominican Republic), he promptly instituted policies of slavery (encomiendo) and systematic extermination against the native Taino population.” In all, “Columbus’ programs reduced Taino numbers from as many as eight million at the outset of his regime to about three million in 1496. Perhaps 100,000 were left by the time of his departure” some seven years later.

As working class women and men, we have an intimate connection with indigenous peoples who were “so free with their possessions” that “they would offer to share with anyone,” just as we do with our neighbors. We have a bond with those whose only wish was to be left alone, to live and carry on as they please, to progress their livelihoods, and to care for their families, loved ones and neighbors, just as we do. The conditioned need to possess “worldly goods” at the expense of enslaving and murdering other human beings does not exist for our benefit, and should not be celebrated. Reality does and should mean something.

Reject revisionism. Embrace reality. We have nothing to lose but our chains.

Colin Jenkins writes for the Hampton Institute where this article originally appeared. He can be reached at: colinjenkinsse@gmail.com.Read other articles by Colin.