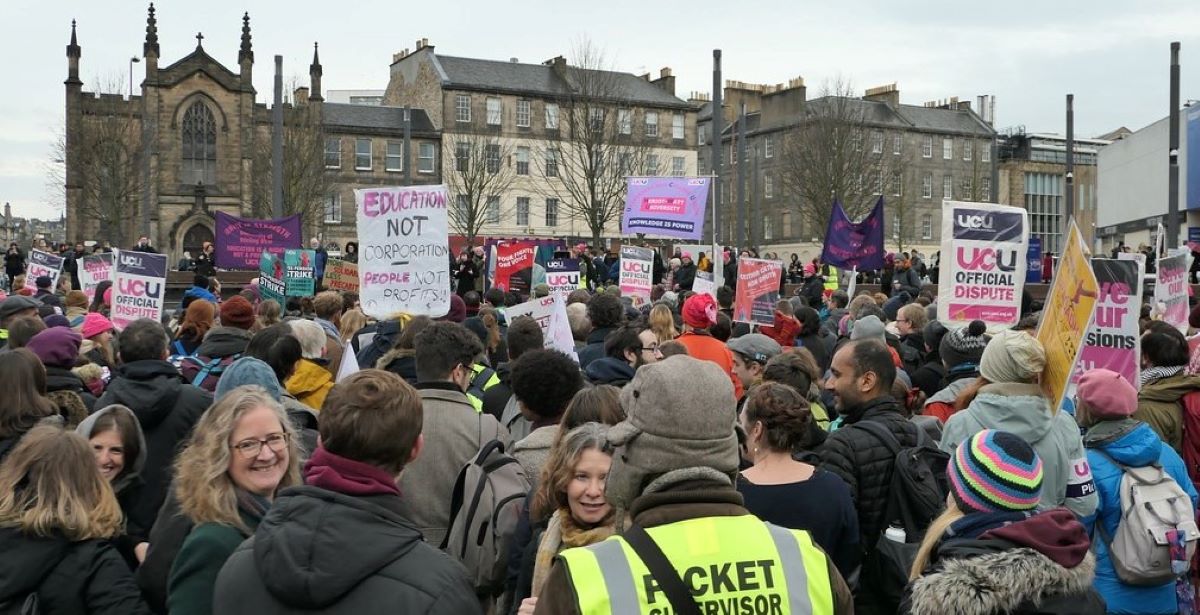 Above Photo: A UCU picket in Edinburgh, November 2019. Magnus Hagdorn.

The Red Square Movement Outline The Recent History Of Student Resistance In The U.K.

And Their Work In Organizing Co-Ordinated National Action.

The decade since the abolition of the university fee cap in 2012 has felt painfully long for staff and students. Universities are no longer fertile ground for public knowledge but an exercise in marketized competition, commodification and over-inflated managerialism. Accordingly, students are increasingly framed as consumers entrapped in swelling debt, while overworked academics are forced to dedicate more time to admin than to teaching or research.

It’s not that the university sector is strapped for cash. With more than 2,500 managerial staff on six-figure salaries and the average vice chancellor raking in £250,000, students know exactly where their £9,000 a year is going. Moreover, with the decline in direct government funding and the near abolition of teaching and maintenance grants, universities are becoming bigger players in the finance sector. Alongside traditional borrowing from banks, universities have taken to issuing their own bonds on the debt capital markets to raise funds.

Where are universities putting this money? It’s not enriching student education, nor supporting lecturers and support staff. No, capital is being raised to construct lavish campus buildings and unaffordable purpose-built student accommodation. The intention? More students, more money.

Worse is coming. The 2019 Augar review, an independent report into UK higher and further education, recommended lowering tuition fees to £7,500 per year. This lip service to ‘consumer rights’ (when education should be free), paired with the Conservatives’ unwillingness to publicly fund social goods, is expected to come with lower repayment thresholds on student loans, disproportionately impacting lower earners.

But students and workers are fighting back. The UK’s roughly 2.5 million students are already becoming the housing activists and disability rights campaigners of the future, by rejecting the division between town and gown and acknowledging the continuities and solidarities that link us to broader society.

And we are already winning. On 5 November 2020, students on Manchester’s Fallowfield campus woke up to find themselves in a makeshift prison after security set up temporary fences around student halls. Furious, they tore down the fences, kickstarting the largest rent strike in 40 years.

These strikes were an unparalleled success, the student movement had not organized so successfully for years. It was reported that £140 million has been returned to students.

At the same time, in early 2021, fee strikes started up, a tactic borrowed from the College Democrats of America, picked up by a small group of universities in London, largely led by the group ‘Liberate the University’. From this, the Red Square Movement emerged. Rent strike organizers, postgraduates, students’ union officers, National Union of Students activists from a range of struggles formed a national organization. We’ve shown that resistance is not only possible – it works.

Our mission is simple: we want to repurpose universities to meet the needs of our communities, continue the fight for free, liberated education and build a renewed, radical student movement.

There will be plenty for us to organize around in the coming year. We are looking ahead to two major flashpoints, each with huge implications for the future of universities. First, the UCU and other unions will strike again in what is likely to be the decisive final showdown in their long-running dispute over pay, pensions, equality, and working conditions. Second, when the government finally gets round to it, we are expecting regressive changes this year to the way this broken system is funded.

The same students who tore down fences and went on rent strike last year will now have a good chunk of their lessons cancelled due to strikes – and then be asked to pay back more when they graduate. They will not be happy! We want to organize that rage. We’re building a nationwide strike solidarity network and getting ready for coordinated action that hits employers where it hurts.