Revolts Against The Neoliberal World Order

Protests against the US and big finance-imposed neoliberal capitalism have exploded across the globe. Two weeks ago, in Pink Tide Against US Domination Rising Again In Latin America, we reviewed 12 Latin America nations that are rising up against privatization, the cutting of social programs, soaring prices and low wages. In the last week, mass protests in Chile and Bolivia have begun and Lebanon has widespread protests against debt and austerity measures. The Nonaligned Movement, which is critical of the use of illegal unilateral coercive measures by the United States to force countries to bend to its will, is meeting in Azerbaijan.

A central part of the recent rise of the Pink Tide was the mass protests in Ecuador led by indigenous peoples and the labor movement. Their actions forced President Moreno to repeal a package of laws that were demanded by the International Monetary Fund (IMF). This week, after Moreno arrested movement leaders, talks broke off and then, on Thursday, the indigenous movement convened to form a popular parliament to develop a new economic plan to avoid detrimental changes required by the IMF. The future in Ecuador is uncertain, but the people are not backing down. 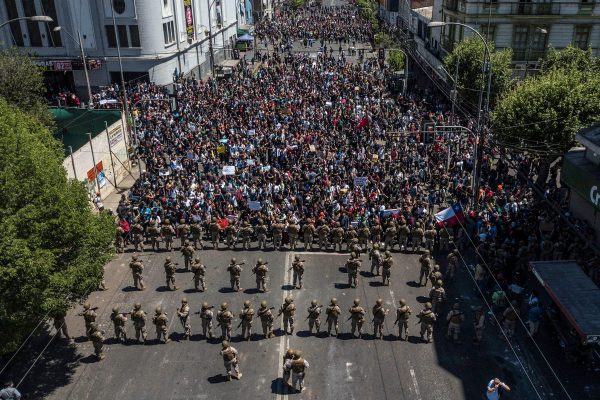 This Friday, more than one million people took to streets in the Chilean capital of Santiago uniting in a call against extreme neoliberal capitalism. The capital was brought to a standstill after a week of widespread protests that were met by a heavy police and military force. So far, 16 people have died, over 200 have been wounded and over 1,500 have been detained, including children.

The protests began on October 14 when high school students demonstrated against a rise in transit fares from the equivalent of USD $1.12 to $ 1.16. By October 18, the protests grew to the point of shutting down all 136 stations of the Santiago metro system. Seventy stations were damaged and twenty were set on fire. The protests progressed into a nationwide uprising against the government and its unfair neoliberal policies. The metro fare hike was just the last straw in a long list of grievances against a system that has robbed working-class and middle-class people of a decent and dignified life.

The government declared a state of emergency and, for the first time since Pinochet, ordered the military with tanks and armored vehicles to patrol the streets. By Saturday, October 19, President Piñera went on television and said: “I have heard the voice of my compatriots.” He suspended the fare increase and announced he would host a roundtable to discuss the issues. He said, “The people will be heard—but the protests have to stop.” This has not deterred the people from continuing to protest.

In a Sunday night address to the nation, Piñera declared: “We are at war with a powerful enemy which is prepared to use violence without limit.” But it was the 11,000 soldiers and Carabinero police who rampaged across Chile, firing live rounds at demonstrators and dragging protesters out of their homes at night. The president’s harsh response only aggravated the situation. Curfews were defied by thousands of demonstrators and, in Santiago, protesters holding pictures of victims under the Pinochet dictatorship temporarily surrounded the tanks.

Chilean journalist, Paul Walder describes how “a country that had seemed orderly and submissive last weekend, has exploded with anger, rage accumulated by generations and passed on to teenagers, as a decantation of the frustrations of their parents, siblings and grandparents.” The uprising and brutal conflict with the police and the military is a reflection of “social pain accumulated throughout the long history of Chilean neoliberalism.” The people of Chile have been subjected to economic and political violence by the state. Salaries are low and taxes on workers are high while billions of dollars have been stolen by corporations.

The uprising includes trade unions and student, feminist, and environmentalist groups. They are calling for a reversal of neoliberal capitalism and a new government.  Their demands are “transversal” (non-sectoral) and include “calling for Piñera’s resignation…pay rises and cheaper basic services, a forty-hour week, the restoration of union rights and sectoral collective bargaining, the nationalization of both public services and strategic energy sectors, student-debt forgiveness, the annulment of the country’s private-sector pension fund, the cancellation of the odious free market ‘water codes’ signed into law by Pinochet in 1981, progressive tax reform, and a new migration policy. Perhaps most dramatically, the demonstrators are calling for a new constitution to be drafted by the Constituent Assembly.”

The Washington Post referred to the specter of a “Latin American spring” similar to the revolutions that shook North Africa and the Middle East in 2011. Stratfor noted, “With regional economies squeezed by sluggish growth and governments still seeking to implement painful pro-market reforms, the situation is ripe for disruptive, widespread unrest.”

The uprising in Chile is significant because prior to these protests it was described as a success of capitalism. Chile is the original and perpetual laboratory for neoliberalism, with more than forty years of economic shock policies and a steady, low-intensity war waged against the nation’s working classes. Capitalists are shocked. Brian Winters, Vice President for Policy at the Americas Society/Council of the Americas, said “Everyone following Latin America is watching this and saying, ‘Oh my god, Chile, too?’” 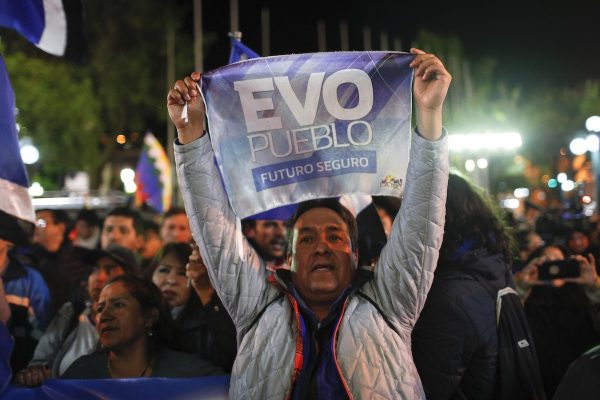 Bolivia Defends Its Democracy From A Coup

In Bolivia, President Evo Morales won re-election in the first round of voting. Morales, leader of the Movement to Socialism (MAS) Party, gained 47.07 percent of the vote, enough to put him 10 percentage points above his closest rival, Carlos Mesa, who received 36.51 percent of votes. Bolivia does not require a second round of voting if the top candidate achieves over 40 percent of the vote with a ten-point margin over the second-place finisher. This is the fourth time Morales has won the presidency in the first round of voting.

Before the results, the opposition announced it would mount a coup if Morales won re-election. After the result, Mesa called for street mobilizations that ended in violence at vote-counting stations, with some opposition protesters burning ballots and the buildings where counting was taking place. Mesa originally endorsed the results when they temporarily showed him having a slightly larger vote share but refused to recognize the results after they indicated that Morales won a first-round victory.

“A coup is underway, carried out by the right-wing with foreign support…what are the methods of this coup attempt? They’re not recognizing or waiting for election results, they’re burning down electoral courts, they want to proclaim the second-place candidate as the winner,” Morales told journalists.

Social movements organized to defend the election against the attempted violent coup. Movements declared a state of emergency and called for mobilizations in the streets to defend democracy while right-wing protesters launched numerous violent attacks across the country. Right-wing rioters blocked election materials from being delivered for the vote resulting in the count being suspended. Labor organizers joined the defense of democracy denouncing “the oligarchic and privatizing interests that hide behind these violent actions.”

The Organization of American States inflamed the opposition by questioning the results. The Center for Policy and Economic Research responded to the points raised by the OAS and urged them to retract their statement. Bolivia responded by inviting the OAS to carry out an audit of the final vote count. Secretary-General of the OAS Luis Almagro accepted the invitation to initiate an Analysis of Electoral Integrity. International observers in La Paz monitoring Bolivia’s general elections praised the legitimacy and transparency of the process, which contrasts statements by opposition leaders.

The foreign affairs ministerial conference for the countries of the Non-Aligned Movement in Baku, Azerbaijan. October 2019. Source mnoal.org.

The Non-Aligned Movement (NAM) is meeting in Azerbaijan this weekend. At the meeting, Venezuela’s President Nicolas Maduro criticized the IMF and denounced the U.S. economic and financial aggressions for being as lethal as its armies. He criticized IMF neoliberal austerity and privatization policies as an attack on the most vulnerable and a violation of human rights. He described the unilateral coercive measures of the United States as a violation of international law aimed at pressuring people to support US neoliberalism by inflicting collective punishment against the people as blackmail.

The NAM was established in 1961 as a forum for independent dialogue and cooperation among 120 developing countries that sought to ensure national independence, sovereignty, territorial integrity and security of non-aligned countries. NAM represents 55 percent of the world’s population. They oppose imperialism, colonialism, neo-colonialism, racism, and all forms of foreign aggression, occupation, domination, interference or hegemony. This July, NAM held a meeting in Caracas that supported Venezuela and opposed the economic war by the United States. They released the Caracas Political Declaration.

The rising left tide in Latin America and around the world is reflected in the NAM. Popular Resistance is working with organizations and activists around the world to create a worldwide network that will work together to oppose the lawless actions of the United States, and any country that acts similarly, such as interference in the politics of other countries through open and covert regime change operations, the imposition of unilateral coercive economic measures or the threat of militarism. Sign onto the Global Appeal For Peace here.

People in the United States suffer similar conditions to those around the world who are plagued by neoliberalism. As the Arab Spring inspired the Occupy Movement, will this Anti-neoliberal Autumn rekindle mass protests in the United States? This is something we need to ponder and perhaps to prepare for and organize to make happen.