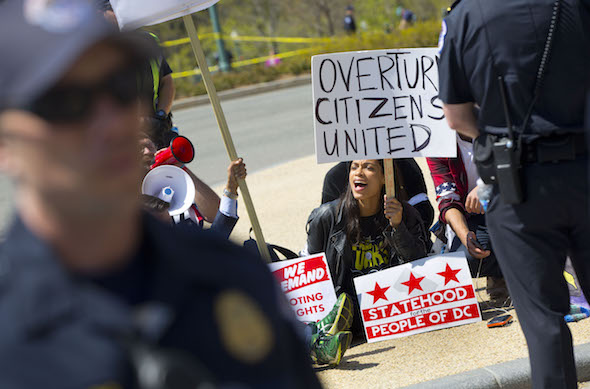 Revolution Is In The Air

WASHINGTON, D.C—The sustained, daily civil disobedience at the Capitol by demonstrators denouncing the capture of our political system by corporate money is part of one of the largest and most important movements for social justice since the Occupy uprising. Join it.

Six hundred of the protesters have been arrested, and I was among 100 arrested Friday.

The protesters, organized by Democracy Spring, have converged on Washington from across the country. Young. Old. Black. White. Brown. Native American. Asian. Christian. Jew. Muslim. Buddhist. Atheist. From the left. From the right. Some marched for 10 days along a 160-mile route from Philadelphia to Washington.

On Friday, about a dozen protesters who had slipped into a tour group to get into the Capitol used zip ties to bind themselves to each other and to scaffolding inside the rotunda. They remained until they were arrested. In addition, scores of other protesters were taken away by police during the day.

The hundreds of arrests this past week have been largely ignored by a corporate media whose lobbyists, along with those of other corporations, are a familiar presence on Capitol Hill. The mass media’s blackout of the largest number of arrests at the Capitol in decades is one of innumerable examples of our corporate coup d’état. And until corporate power is overthrown—and it will be overthrown only from the streets in sustained acts of civil disobedience—the nation will continue to devolve into an authoritarian police state. Corporations will continue to strip us of our remaining rights, carry out the deadly assault on the ecosystem, impoverish workers, make a mockery of our democracy and cannibalize what is left of the country. The system of corporate power is incapable of reform. It must be destroyed.

We will have to do this together. No one will do it for us. And as the numbers in the streets swell—and I will be with the protesters in Washington again on Monday—the corruption of our political system becomes ever more apparent.

It is imperative to protest in Cleveland and Philadelphia during the Republican and Democratic conventions later this year. The building of movements and sustained civil disobedience is far more important than voting. Voting without powerful and organized movements is futile. Voting without profound electoral reform, including banishing corporate money from politics, is useless.

The hope of Democracy Spring organizers is that growing waves of people will be arrested at the Capitol. Monday is expected to draw hundreds of people to a sit-in. While the protests center specifically on four bills before Congress that would expand public financing for federal campaigns, pass a constitutional amendment to overturn the Supreme Court’s Citizens United ruling, end gerrymandering and restore the Voting Rights Act, they also have challenged corporate domination of all aspects of society. The daily marches have focused on themes: labor, racial justice, student debt and (on Saturday) climate justice.

Democracy cannot be sustained if it cannot be seen. Those in power must be made to fear movements that are willing to disrupt the machinery of state. The elites must be kept in check.

The question, as the philosopher Karl Popper pointed out, is not how to get good people to rule. Most people attracted to power, Popper wrote, are at best mediocre and usually venal. The question is how to build movements to stop the powerful from doing sustained damage to the citizenry, the nation and the environment. It is not our job to take power. It is our job to keep power constantly off balance and fearful of overstepping its reach to pillage on behalf of the elites.

This is why, as Ralph Nader points out, our last liberal president was Richard Nixon. Nixon was not a liberal or endowed with a conscience. However, powerful grass-roots movements, including the anti-war movement and labor unions, frightened him and others in power. Nixon in 1974 signed an amendment to the Fair Labor Standards Act that raised wages by more than 40 percent. He created the Environmental Protection Agency and the Occupational Safety and Health Administration. He called for universal health insurance and passed progressive legislation including the Mine and Safety Act, the Clean Air Act and the Clean Water Act—much of it authored by Nader. He pushed through a minimum tax on the wealthy—the alternative minimum tax—and called for a guaranteed minimum income for the poor under the Family Assistance Program. During his administration, for the first time since World War II, spending on social service programs exceeded expenditures on the war machine.

It was the pressure of radical movements and independent parties such as the Progressive Party and the Communist Party that saw Franklin Delano Roosevelt create the New Deal, which delivered a series of social and economic reforms that only the Nixon presidency would rival. Roosevelt warned his fellow oligarchs that they had better part with some of their money to create public works projects, Social Security and some 12 million jobs during the Depression or face the prospect of a revolution in which they would lose everything. Roosevelt later said that one of his greatest achievements was saving capitalism.

The insurgent candidacies of Bernie Sanders and Donald Trump have made it clear to citizens across the political spectrum that money has replaced the vote. Their supporters and other Americans now understand that the elites have gamed the system. They grasp that they have been shut out. And this has engendered the anger and frustration that fuel movements willing to step outside the established boundaries of the political process.

The corrupt institutions of power have, for decades, successfully used empty political theater to create the fiction of democracy. In our managed democracy, usually only corporate-approved candidates—including Barack Obama, who was anointed by the Chicago political machine—are able to get elected to state or national office. It is nearly impossible in our system of inverted totalitarianism to vote against the interests of ExxonMobil, Bank of America, Raytheon or Goldman Sachs. On all of the major structural issues, from the failure to regulate Wall Street to imperial wars and the evisceration of our civil liberties, there has been complete continuity between the Bush and Obama administrations.

The voices of citizens are rising from the streets of Washington and fracking sites in Colorado. They are rising from towns and cities such as Ferguson and Baltimore where police murders are terrorizing poor people of color. They are rising in Los Angeles from underpaid workers and the Dreamers. And these voices will, if we sustain and join them, become a deafening crescendo. They will create the kinds of movements that alone make social and political change possible.

We all have the capacity to refuse to cooperate. We do not have to be complicit in the collective suicide of the species. We can bring democracy into the streets. By joining boycotts, demonstrations, strikes, hunger fasts and popular movements, by carrying out acts of civil disobedience, we ignite our souls, we create another narrative, another way of being, and we expose the dead hand of authority.

The elites are in trouble. They have lost credibility. Neoliberalism and globalization have been unmasked as tools of corporate exploitation. The billions spent on propaganda to maintain the illusion of democracy and the benefits of the “free market” no longer work. The endless wars, which have not made the United States, Europe or the Middle East more secure, are now unmasked as blood-drenched arms markets for a war industry bloated with trillions of taxpayer dollars.

The war industry and the fossil fuel industry, like all corporate systems of exploitation, are at their core systems of death. They assault a planet that needs to swiftly build green infrastructures and egalitarian social systems that make life possible. The battle before us, as anyone who follows climate science understands, is urgent. It is about defeating these systems of death. It is the battle for life. We may lose. These systems are powerful and ruthless. But if we do not resist, we extinguish hope.