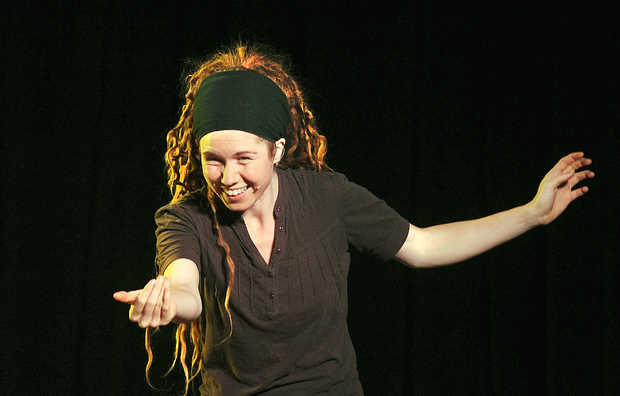 Above: Rivera Sun, an Auburn native now living in Taos, N.M., performs her one-woman act, “The Education of Lala Girl,” on Sunday at the Olin Arts Center at Bates College in Lewiston. Sun Cook performs the story of Lala, an African-American girl growing up in the small town of Lovely, Kan., chronicling her spunky, indomitable spirit. The Lewiston-Auburn Sun Journal.

Rolling down the corporate-political assembly line is a trade deal so treasonous to the peoples of the world that it should serve as revolution’s matchstick. The treaty is secret, but one fact is well known: the Trans-Pacific Partnership agreement is being negotiated by transnational corporations without a single US legislator present.

Each time I hear this, my eyes blink in disbelief. Without a single legislator present . . . without their presence at negotiations, without so much as seeing a draft of the deal, and most treacherously, without objection or outcry at their exclusion!

The President has requested our legislators to “fast track the TPP”, which would allow him to sign the deal prior to sending it to Congress for approval or disapproval. If they agree to this, then Congress eschews its right – and its responsibility – to reject parts of the trade deal and reopen negotiations.

This complicity of the part of our legislators sinks an iron weight in my gut.

It smacks not of exclusion, but of willing collusion with transnational corporations that have a proven track record of criminality, destruction, and abuse. In my short lifetime, large corporations have been responsible for poisoning two major gulfs with oil spills, blowing up more than five hundred mountains, destroying numerous watersheds, wrecking the food system with toxins, and causing one in six Americans to be evicted from their homes. They have used the media apparatus to deny the existence of climate change, fomented wars, and obstructed truth and justice so often that it is practically “industry standard”. The list of grievances can be only partial here, but these abuses alone must sound the alarm bells of our conscience.

The largest trade deal since NAFTA is being written in secret by entities that have consistently abused the global population for the sake of profit.

A single thought rings bell-like in my mind.

It is a quiet statement. Pragmatic.

Revolution is not a stirring thought. It evokes a great sadness in me, as if a member of my family had sunk so far into alcoholism that I must declare my separation and call on the collective strength of society to rein in his behavior so he does not cause death and destruction to us all. I am old enough to have cut through romantic idealizations of revolution, but smart enough to understand that this collusion of government and pathological corporations must be stopped.

I regret that it has come to this. Even as I steel my heart for the work ahead, I look to the seats of power and wish they would turn their self-involved gazes from their profits and see the suffering they are causing.

Wishes alone will not change anything. Action is required. So, with pragmatic determination, I look out across the unlikely landscape of my nation. Violence seethes just under the surface. Ignorance abounds. Despair, helplessness, and apathy afflict us, along with addiction and ill health. Police brutality is on the rise. Authoritarian power is replacing democracy and civil liberties. The pervasiveness of the surveillance state is so widespread that honesty is our only option.

We must, despite these odds, prepare for struggle with great determination.

And since the government knows our secrets, let me tell you one of theirs. They are hoping for violent insurrection. Armed uprisings can be thoroughly and violently suppressed and quell the rest of us into fearful submission. Those who work toward change know that violence is not only strategically unwise, it is exactly what our opponents want.

Our politicians control the largest, most well funded military in the world. The corporations employ private mercenaries. And, while there are many noble reasons to advocate that the people use nonviolent struggle, the most strategic one is this: by using violent means, we will have chosen the very type of struggle in which our opponents excel. Their superiority is unquestionable at this time.

Realistic alternatives exist. Strategic nonviolent action has been used around the world to dismantle regimes far more repressive and overtly controlling than our own . . . but these nonviolent struggles require that the populace rouse itself from stupor, apply their minds to understanding how such strategic nonviolent action succeeds, and set their hearts firmly on the effort towards a truly democratic society.

Striving for revolutionary change is never easy, but the haystack of tyranny and injustice has been piled high by the abuses of the government and the corporations. Every citizen will find a different matchstick for revolution; the Trans-Pacific Partnership is mine.

Author/Actress Rivera Sun sings the anthem of our times and rallies us to meet adversity with gusto. In addition to her most recent novel, The Dandelion Insurrection, she is the author of nine plays, a book of poetry, and her debut novel, Steam Drills, Treadmills, and Shooting Stars, which celebrates everyday heroes who meet the challenges of climate change with compassion, spirit, and strength.  http://www.risingsundancetheater.com/wpblog/