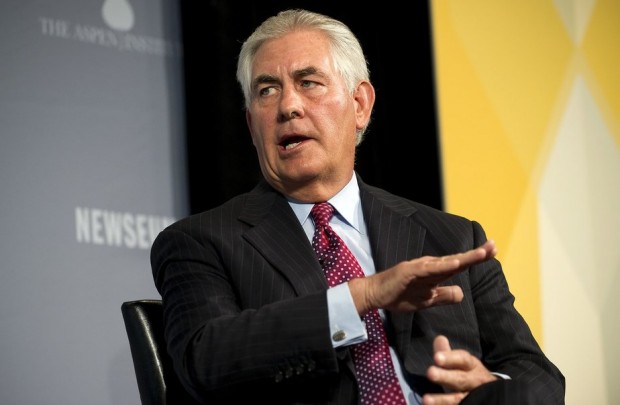 Rex Tillerson Admits US Working Towards Regime Change In Iran

Trump’s foreign policy team is filled with hawks on Iran, but Tillerson is the first administration official to advocate for regime change in his official capacity.

The new U.S. policy towards Iran includes regime change, according to Secretary of State Rex Tillerson.

Tillerson was asked on Wednesday whether the United States supports regime change inside Iran. He replied in the affirmative, saying that U.S. policy is driven by relying on “elements inside of Iran” to bring about “peaceful transition of that government.”

He made the comments in a hearing on the 2018 State Department budget before the House Foreign Affairs Committee. Rep. Ted Poe (R-TX) asked Tillerson about U.S. policy towards Iran, including whether the U.S. government would sanction the Iranian Revolutionary Guard Corps (IRGC) and whether the U.S. supported “a philosophy of regime change.”

“They are doing bad things throughout the world, on behalf of terrorism and destroying human rights of many people,” Poe said, referring to the IRGC. “I’d like to know what the policy is of the U.S. toward Iran. Do we support the current regime? Do we support a philosophy of regime change, peaceful regime change? There are Iranians in exile all over the world. Some are here. And then there’s Iranians in Iran who don’t support the totalitarian state. So is the U.S. position to leave things as they are or set up a peaceful long-term regime change?”

“Well our Iranian policy is under development,” Tillerson replied. “It’s not yet been delivered to the president, but I would tell you that we certainly recognize Iran’s continued destabilizing presence in the region, their payment of foreign fighters, their export of militia forces in Syria, in Iraq, in Yemen, their support for Hezbollah. And we are taking action to respond to Iran’s hegemony. Additional sanctions actions have been put in place against individuals and others.”

“We continually review the merits both from the standpoint of diplomatic but also international consequences of designating the Iranian Revolutionary Guard in its entirety as a terrorist organization,” he added. “As you know, we have designated the Quds [Force]. Our policy towards Iran is to push back on this hegemony, contain their ability to develop obviously nuclear weapons, and to work toward support of those elements inside of Iran that would lead to a peaceful transition of that government. Those elements are there, certainly as we know.”

Trump’s foreign policy team is filled with hawks on Iran, but Tillerson is the first administration official to advocate for regime change in his official capacity.

“Since the 1950s, the United States tried to meddle in Iranian affairs by different strategies such as coup d’état, regime change, and military intervention,” Qassemi said, referring to U.S. involvement in the 1953 coup in Iran, dubbed Operation AJAX by the CIA. These efforts have all failed, Qassemi said, adding that the new U.S. government was “confused” and could be “easily manipulated by wrong information.”

Tillerson’s focus on nuclear weapons in his comments on Wednesday are notable, given that he has previously acknowledged that Iran is in full compliance with the Iranian nuclear agreement (as has the International Atomic Energy Agency).

Last week, Iran suffered an attack claimed by the Islamic State that killed at least 17 people and injured dozens. The White House response implied that Iran deserved the attack. “We grieve and pray for the innocent victims of the terrorist attacks in Iran, and for the Iranian people, who are going through such challenging times,” the statement read. “We underscore that states that sponsor terrorism risk falling victim to the evil they promote.”

The next day, Rep. Dana Rohrabacher (R-CA), a vocal Trump supporter, praised the attack in Tehran and suggested that the United States should work with the Islamic State to counter Iran.

On Thursday, the Senate passed an Iran sanctions bill, despite former Secretary of State John Kerry’s warning that new sanctions could threaten the Iranian nuclear agreement.