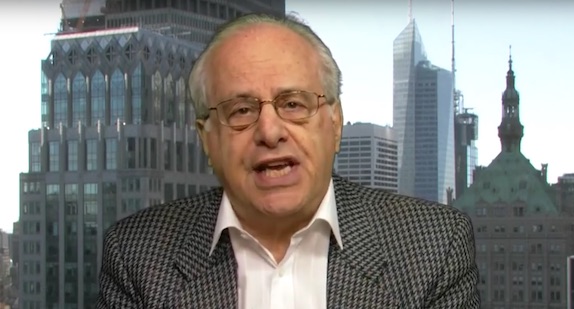 Richard Wolff: The Next Economic Crisis Is Coming

Every time I sit down with economist Richard Wolff, he demonstrates why the field of economics is so necessary in the cultural critique of our American empire. In my recent interview with him, we discussed why the thriving economy touted by President Donald Trump hasn’t translated into real gains for the majority of Americans. We also went over what is hidden by the economic indicators that allow the financial industry to celebrate while so many Americans are still suffering.

Professor Wolff talked with me on my show “Redacted Tonight: VIP” on RT America. Enjoy this excerpt from the interview.

LEE CAMP: Professor Wolff — thanks for joining me! Last month was, apparently, the worst December for the stock market since the year 1980. What’s going on here?

RICHARD WOLFF: A lot of things are coming to a head. Each one of them by itself might have gone by without this, but they’re too many.

To list major ones: The tariff war with China, Europe and the rest creates enormous uncertainty. It makes all the predictions and plans of corporations and entire countries uncertain. People are holding back. Number one.

Number two, the capitalist system that we’re all part of has a downturn on average every four to seven years. It’s been more than seven years since the last crash — 2008/9 —so everybody knows it’s coming.

It’s not a question of whether, we’ve never been able to overcome these kinds of instabilities in our system. So we’re overdue for one.

And here’s another one that people don’t talk about. The big tax cut last December, 2017, gave an awful lot of money to the richest Americans and to big corporations. They had no incentive to plow that into their businesses, because Americans can’t buy any more than they already do. They’re up to their necks in debt and all the rest.

So what they did was to take the money they saved from taxes and speculate in the stock market, driving up the shares and so forth. Naive people thought that was a sign of economic health. It wasn’t. It was money bidding up the price of stock until the underlying economy was so far out of whack with the stock market that now everybody realizes that and there’s a rush to get out and boom, the thing goes down.

Very serious. The question now is how badly the underlying economy — jobs, incomes, and debts — will be impacted negatively by all of this stock market downturn.

LC: You brought up predictions of an impending crash because it’s been seven or eight years, even JPMorgan Chase has told investors that the next crash, the crisis, they think will be in 2020. What does it mean when the largest financial firms in the world are saying, “Oh yeah! We’re just going to have another financial crisis around the corner”?

RW: It’s a wonderful sign. (Laughs) And by the way, JPMorgan Chase is not the only one. Goldman Sachs has done that, the International Monetary Fund, lots of the major players know it’s coming. The only disagree on exactly when which you can never know anyway. But here’s what it means, it means that they have accepted, as if it were like rain falling from the sky, that this economic system we have crashes every few years. As if it’s kind of in the cards. Unchangeable. Unaffected by anything we might do.

It’s kind of like giving up on the human desire not to be plunged into a crazy unemployment and cutback every few years that interrupts people’s lives, their educations, their savings for the future. I mean, we ought to have an economic situation, or at least a debate, about an economic system that works this way rather than simply accepting it in the manner of these predictions. As if there’s nothing we can do.

LC: Absolutely. Donald Trump keeps telling us that unemployment is very low, so obviously he is a wonderful president. Is that true? Also I overheard on NPR that they had a panel or something about why wages aren’t going up considering how well the stock market has done over the past years, and how low unemployment is. The host just seemed baffled as to why wages have not gone up.

RW: Well again, there are a number of reasons why wages aren’t going up. What we’ve seen is a quote-unquote “recovery” that is very peculiar.

Two particular peculiarities: People who lost jobs — and those are in the millions in 2008, 2009, and 2010 — have now gotten jobs, that’s true, but the jobs they’ve gotten have lower wages, have less security and fewer benefits than the ones they lost, which means they can’t spend money like we might have hoped they would if they had got the kinds of jobs they lost, but they didn’t. And the second thing is that large numbers, particularly of white men aged 30-60, have not gone back into the labor force.

They lost their jobs, it’s very hard for them to find new jobs. The jobs they find are so poor that they’re more likely to stay at home, or do something else. So as the economy comes back at least with some jobs, and as they run out of savings, these people are slowly coming back.

So there’s no need for employers to raise wages to attract workers, they can just pull them slowly out of the desperate population of people who haven’t worked for years and have run out of savings. They can’t turn to their friends and relatives anymore, so they come back and accept the jobs that they were once too proud to accept. It’s a real downturn of the quality of life of America, which is why you don’t see the wages going up and why you see the anger and the bitterness, because all of the promises of Obama before, and of Trump now, are not changing that basic situation.

LC: Yeah, the quality of life has definitely gone down. If these jobs are not good — as you say — and also the gains have gone to the 1%, and something like 50% of Americans can’t afford a $1000 emergency, then why does it seem like everything just keeps trucking along? You know, you don’t really see things collapsing. There aren’t strikes shutting down whole cities. What’s the motor that keeps things going?

RW: Well at this point I think it really depends on what indexes you’re looking at. The biggest thing that’s kept this economy going in the last few years should make everybody tremble. It’s called debt, let me give you just a couple of examples. Ten years ago, at the height of the crash, the total debt carried by students in the United States was in the neighborhood of $700 billion, an enormous sum.

What is it today? Over twice that, one-and-a-half trillion dollars. The reason part of our economy hasn’t collapsed is that students have taken up an enormous amount of debt that they cannot afford, in order to get degrees which will let them get jobs whose incomes will not allow them to pay back the debts. And forget about getting married, forget about having a family.

We have paid an enormous price in hobbling the generation of people who would have otherwise lifted this economy and made us more productive. It is a disastrous mistake historically, and if you face that, and if you add to it the increased debt of our businesses, and the increased debt of our government, you see an economy that is held up by a monstrous increase in debt, not in underlying productivity, not in more jobs that really produce anything, but in debt.

That should frighten us because it was the debt bubble that burst in 2008 and brought us the crash. It is as if we cannot learn in our system to do other than we’ve always done and that’s taking us into another crash coming now.

LC: Yeah. This is the land of the free, but it seems like most of us are chained down by debt peonage.