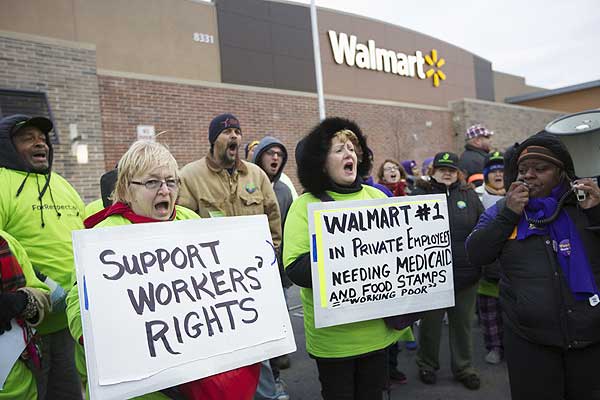 Called the “Ride for Respect,” the demonstration at Walmart corporate headquarters in Bentonville, Arkansas, will be modeled on civil rights volunteers who rode buses into the South in the 1960s to protest Jim Crow racial injustice.James and Trina Vetato knew about the freedom riders from history books.

Next month, the Paducah , Kentucky , couple expects to join a civil rights movement-style protest by OUR Walmart, an employees group, against the world’s largest retailer.

Called the “Ride for Respect,” the demonstration at Walmart corporate headquarters in Bentonville, Arkansas, will be modeled on civil rights volunteers who rode buses into the South in the 1960s to protest Jim Crow racial injustice, James Vetato said.

Busloads of OUR Walmart members will converge on Bentonville from across the country. They will be in town for the annual shareholders’ meeting, which is June 7.

Vetato said he expects 300 or more OUR Walmart members to begin arriving the week before the meeting. Most of the protestors — including Trina Vetato — will be on an unfair labor practice strike, her husband said.

The Vetatos are activists in Organization United for Respect at Walmart, or OUR Walmart for short.

“The protest will go on the whole week before the meeting,” he said. “We especially want to draw national attention to Walmart management’s threats and retaliation against workers who speak up for better pay, more hours and respect on the job.”

Vetato worked at his wife’s store in Paducah. He said when he stood up for his rights, “I was threatened and intimidated by management who made my life so miserable I finally quit.”

OUR Walmart includes many current and past Walmart employees, Vetato said. “We’d have a lot more, but so many associates are afraid to join,” he added.

Eighty percent of Walmart associates are paid so poorly they have to be on food stamps or other public assistance, Vetato said.

Our Walmart wants better pay, benefits and working conditions. “Like the freedom riders, we will be standing up for dignity and respect and justice and will be protesting peacefully.”

OUR Walmart was organized in June, 2011, when about 100 employees – James Vetato among them – went to Bentonville for the shareholders meeting and handed company executives a “Declaration of Respect.” The document includes calls for a $13 an hour minimum wage and full-time work for those who want it.

The declaration is on the OUR Walmart website. http://forrespect.org/our-walmart/about-us/

OUR Walmart isn’t a union, but the United Food and Commercial Workers is helping the group, Vetato said.

“UFCW and OUR Walmart have the purpose of helping Wal-Mart employees as individuals or groups in their dealings with Wal-Mart over labor rights and standards and their efforts to have Wal-Mart publicly commit to adhering to labor rights and standards,” says a legal disclaimer on the UFCW’s Making Change at Walmart website. “UFCW and OUR Walmart have no intent to have Walmart recognize or bargain with UFCW or OUR Walmart as the representative of Walmart employees.”

Some other unions are in OUR Walmart’s corner, too. The Paducah-based Western Kentucky AFL-CIO Area Council unanimously passed a resolution expressing solidarity with the organization.

“We really appreciate that and what the UFCW is doing for us,” Vetato said. “The UFCW helped us pass out leaflets at the Paducah store where my wife works and I used to work.”

Trina’s husband was among several OUR Walmart members who gathered for five days at the Civil Rights Institute in Birmingham , Ala. , to plan the Bentonville protest.

With $469.2 billion in revenue and $16,999 billion in profits last year, Walmart is the number one Fortune 500 U.S. company. Mike Duke, Walmart chief executive officer, made $23,150,000 in 2012, according to PayScale, an online company that compiles salary, benefits and compensation information.

Vetato scoffs at claims by Duke that the company pays “competitive wages.” The median worker pay at Walmart is $22,400 or 1,034 times less than what Duke makes, according to PayScale.

Donations to OUR Walmart workers, many of whom will give up as much as a week’s pay to be in Bentonville, Vetato said, can be made online here.