[In it,  I drew especially on two experiences:

We are facing a government that is beginning the process of shattering democracy and devastating the Earth, elevating what Martin Luther King defined as the deadly triplets of Racism, Militarism, and Materialism into the domineering reality of our lives.

That government is trying to make it become the new normal that our lives will be fearful, consumed by fake news and “alternative facts,” struggling to deal with worsening economic pressures and worsening ecological disasters, even life-spans shorter in years.

Three different sorts of energy have been stirred into a devil’s brew to fuel this anti-democratic political machine. They have three specific people as their embodiments:

First, a Leader – a Bully — with a strong personal streak of narcissism, cruelty, and vindictiveness: Mr. Trump. What he brings to the amalgam is a “populism” that is not about policy but about an emotional connection with people who are angry enough to break the rules of decorum –- and welcome a leader who does break them.

Second, an array of corporate structures consumed with greed for constantly increasing their own wealth and power  -–  embodied in Mr. Pence and a Cabinet made up of Robber Barons;

Third,  an ideological vision of a “sacred” society that seeks to “return” to a Christian West of governmentally enforced “traditional” religion, family, sexuality, class structure, racial and ethnic hierarchy, dominion over and exploitation of the Earth. This white-male supremacist vision necessitates committed enmity to Islam and public secularism, to all diversity and all debate as dangerous. I know this is a staggering vision –– it staggers me –- but that is what Steve Bannon embodies.

What could and should we be doing in this moment of American and planetary crisis? We need to do three things:

We have already seen the beginnings of a vigorously empowered democratic resistance to the Trump-Bannon-Pence presidency.  We have seen the enormous Women’s March(es) of January 21 and the Airport Occupations shortly after on behalf of refugees and immigrants and the flood of calls and visits to Congress against racist, anti-public-school, anti-health-care, anti-labor, anti-Earth  Trump appointees and against plans to destroy all forms of public support for medical care.

Now, this very week, it is possible to Resist much closer to home. Congress is in recess this week, and it is possible to show up at our elected officials’ events, town halls, and other public appearances to demand answers to questions like whether our own members of Congress will pledge to protect and improve our health care, to protect the religious freedom of Muslims and to meet the human needs of immigrants.

Resistance is not only about the “content” of political demands, but about the “style” of holding officials accountable. If CongressMembers refuse to hold town meetings, we can hold our own with the Congressional chair empty — to highlight to the public and the media the lawmakers who won’t even meet with their constituents. These events are being called “Resistance Recess.”

So far, the least bold resistance has been defense of the planet that keeps us alive. This is sad, but not surprising. Health care for the sick, religious freedom, the human needs of immigrants and refugees can all be portrayed in human-interest stories, videos, photos. Despite multiplying hyper-droughts and hyper-floods, the connection between planetary scorching and human disaster is harder to see and feel. Yet it remains the Big Story of survival.

So on April 29, we intend to bring together in Washington DC and in support cities around the country a People’s Climate March and Movement. I urge you, The Shalom Center ‘s members and readers, to join in that effort.

For many Jews and Jewish organizations, the fact that April 29 is Shabbat makes participation difficult. Plans are under way for a multi-religious prayer service like the one that led the 400,000-person People’s Climate March in New York City in 2014. And in some Jewish communities, there are plans for local Shabbat gatherings in support of the Washington March.

You can get fuller information here as the plans unfold, and you can register to receive bulletins by clicking here www.peoplesclimate.org/?source=theshalomcenter

We need to rethink the assumptions of what American democracy means. Rethinking is necessary because the Trump-Pence-Bannon coalition is right about one thing –– right enough to win an election under the Constitutional rules even while vastly losing the popular vote.  They are right that for important parts of American society, the globalization model in economics and culture is not working.

Even if they had barely lost instead of barely winning the recent election, American society would have had to keep living with a painful ulcer of fear and rage. That ulcer would have kept us paralyzed. If as a nation we had ignored it, we would have continued to be unable to heal our society as a whole while the ulcer grew and worsened.

Unable, as Dr. King warned, to conquer the triplets of Racism, Militarism, and Materialism.

And this is not only a politically profound issue, it is a spiritually profound challenge. Are those who voted for Trump not still our neighbors, deserving of our open ears and hearts, our striving to understand their legitimate needs and to craft both human connections and policy responses? This too is a question that Dr. King faced in his own day and calls on us to face.

The Trumpist answer to this crisis is even more domination, more top-down control, more repression of those energies that are refusing to keep living passively in situations that are abusive and oppressive. That is an anti-democratic, anti-human, anti-web-of-life response; but the status quo is not viable. So we need to rethink what democracy must mean in our generation.

We need to rethink the relationship between the “old America” that now feels cast out economically, culturally, and spiritually –- and the New America which thinks it is the wave of the future but feels disempowered in the present. Is it inevitable that both kinds of the “left-outs” are hostile to each other, or can we reach beyond the present barricades?

We need to rethink our top-down political parties, the power of Hyper-Wealth over our elections, the precariousness of our voting rights, including the built-in blockages against democratic decision-making.

We need to reexamine the nature of coalitions between groups of people and organizations that may share some agendas but disagree on others.

We need to rethink the roles of neighborhoods, urban and rural, in giving life to democracy.

We need to rethink the nature of jobs, work, and income in our increasingly computerized and robot-enabled society.

We need to rethink how we think –- the processes of education, culture, media old and new.

We need to rethink even religion. Already, the proliferation of “interfaith” and “multireligious” prayer services challenges the very foundations of what the Abrahamic traditions thought Truth was for most of the last two thousand years. It has happened before in history –- under the tyranny of the Roman Empire and the tyranny of Pharaoh, for example —  that an overweening exercise of tyrannical power that shattered old forms of community has led through times of tumult to the birth of new forms of sacred community. Could that be happening now? 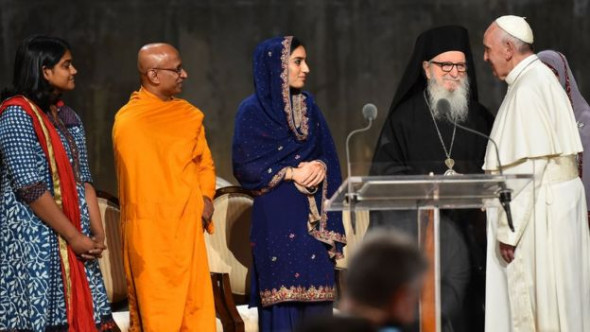 For us at The Shalom Center, and for increasing numbers of activists around the country, the fact that we are approaching the 50th anniversary of Dr. King’s “Beyond Vietnam” sermon –– his most profound, prophetic, and provocative –- offers an extraordinary moment to do this rethinking.See the website <MLK50.org>, initiated by The Shalom Center  but already reaching out beyond us, for ways to use the sermon in this coming year.

Locally, communally, in neighborhoods and cities and a few states like California and Washington, what begins as resistance is leading to creating alternatives. Cities that declare their police forces will not enforce tyrannical treatment of immigrants ordered by the Trump government. Synagogues and churches that protect mosques from violence and vandalism incited by Bannon’s Breitbart white supremacism.

Already, some California state legislators are proposing a single-payer health-care system at the state level.

Could local activism bypass the federal government’s support for the Corporate Carbon Pharaohs and address the climate crisis at the state or local level?  Could California pursue a massive state-wide solarization program? If that seems tough to imagine in your state, imagine that your city decides to invest in solarizing every public building, including the public schools.

What would it take to convince your city council, your Board of Education? Are you ready to organize such a campaign?

Even closer to home — imagine synagogues, churches, mosques, PTAs, labor union locals that not only solarize their own buildings but create loan funds to assist their congregants and members to solarize their homes and businesses.

For these efforts, please review the experiences of DC SUN —  Solar United Neighborhoods—and the Northwest Philadelphia Solar Co-op. See their websites at <http://communitypowernetwork.com> and