Above photo: People marching to protest AIPAC on March 3, 2018 in Washington, DC. Photo by Nicole Hanhan

Washington, DC – The annual meeting of the extremist Zionist lobby, AIPAC, was held this weekend in Washington, DC. The event did not go without the notice of people opposed to Israel’s apartheid state and occupation of Palestinian lands, as reports of up to 500 people protested the convention. Israel’s occupation of the West Bank and Gaza has been criticized as a violation of international law, but the reality is much broader — the creation of Israel stole land from the people of Palestine. The Palestinian nation, as it is shown on maps before Israel was created, was destroyed by the colonialism of the United States and western powers. 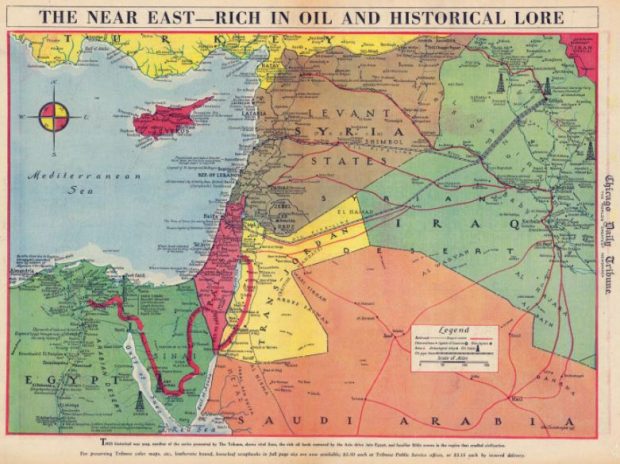 Map of the Middle East with Palestine in 1944. In 1948 Palestine was erased from the map with the creation of Israel.

Israel serves as the “the largest American aircraft carrier in the world that cannot be sunk,” as former general and secretary of state Alexander Haig called it. It is located in the Middle East, a critical region for the United States, labeled an area of US national security because of its tremendous oil reserves. The US uses Israel to join in attacks on Arab nations and to take actions the United States cannot take, e.g. assassinations of leaders and attacks on nuclear energy plants in sovereign countries, among others.

Protests were organized by Jewish Voice For Peace, the ANSWER Coalition, CODE PINK and others. While hundreds protested Israel and AIPAC, elected officials tend to go to AIPAC on their knees to tell them what they want to hear; indeed, AIPAC often gives US elected officials the statements they are to read at the convention. The Trump administration was represented by Vice President Pence at the event.

Below are tweets describing the protests against AIPAC.

~300 protesters are moving on the annual #AIPAC conference, which they’ve called a “criminal lobby that controls American foreign affairs” pic.twitter.com/8soqFEEbDF

The streets of Washington awash with the united call for a free Palestine & an end to Israeli apartheid #AIPAC2018 pic.twitter.com/5WU2Y85E3w

Did you know it’s not anti-Semitic to criticize their illegal occupation?

“This is a partnership of racism and hate. We are tired of our Gov unconditional support for the Apartheid state of Israel. And we are specifically calling to #FreeAhed “ DC Protest vs #AIPAC2018 #FreePalestine pic.twitter.com/w6ngduDUU4

~300 protesters are moving on the annual #AIPAC conference, which they’ve called a “criminal lobby that controls American foreign affairs” pic.twitter.com/8soqFEEbDF

.@codepink is standing on the barricade now with a big “free Palestine” banner. #AIPAC pic.twitter.com/6ELvr1iSEg

Rep. Josh Gottheimer, seen here at #AIPAC2018, is fronting the Israel lobby effort to prevent publication of an investigative documentary about it by threatening @AlJazeera with foreign agent registration https://t.co/Q7jlsrKdxO https://t.co/DQD9ci4B8R

”Jews are being brutally beaten because they refuse to serve in the IDF. Every single day this is going on”

@codepink blocking part of the entrance to the annual Israeli lobbying conference in DC #AIPAC pic.twitter.com/GyYxIVN3cM

Rabbi Weiss talks about suppression of masses of Jews who refuse to wage war on Palestine. #FreePalestine #AIPAC2018 pic.twitter.com/j6TFCmkcaC

We’ve heard nothing but “Russia meddled” w/very flimsy evidence since HRC’s @DNC was outed for domestic election interference (rigged primary) which stuck us all w/DT.