This is a nationwide campaign being initiated by people currently confined in the United States. This campaign grew out of the August 21 National Prison Strike Demand #10: The voting rights of all confined citizens serving prison sentences, pretrial detainees, and so-called “ex-felons” must be counted. Representation is demanded. All voices count!

To meet this 10th demand a collaborative effort of prison lead organizations and outside allies have an ongoing mission to bridge the gap with people that were formerly confined in order to build a potent voting bloc. The Right 2 Vote campaign has incorporated two initiatives, Bar 2 Ballots and Vote 4 me. Inside U.S prisons, there has been a wave of awareness building amongst those confined who understand that they must gain political power by capturing their right to vote in order to end the dehumanization process in the U.S jails, prisons, and even after release.

With no political input, prisoners are easily exploited as cheap labor and commodities. A lack of political power directly influences sentencing, living conditions, and the expansion of the Prison Industrial Slave Complex. There is no secret as to why our country today has the world’s largest prison population. For the people that were formerly imprisoned, they find themselves functioning in society as second class citizens without the bars.

In our eyes, the U.S has created a distinct class, i.e prison class. A class of people that are denied the basic fundamental right in a democracy, the right to vote. Many currently and formerly confined people pay taxes but are barred from voting. We the prison class, demand an end to taxation without representation. The Right 2 Vote campaign is historic in its efforts to build a National Movement from inside, in collaboration with those formerly in the same shoes with the support of activists and allies to make every vote count.

It is this campaign’s focus to develop political capital by organizing families, friends, and organizations that are allies to those currently/formerly inside without the right to vote. With political credibility we can have a degree of say in changing laws for a larger portion of those who are disenfranchised, cause reductions in the U.S prison population, improve prison conditions, force sentencing reforms, and force the closing of prisons and jails. By re-enfranchising all those who have fallen short according to society terms, we end the mockery of a country claiming to be the beacon for democracy, while taxing a class of people that are denied the right to vote.

The Right2Vote Campaign receives funds through the Roddenberry Foundation’s 2019 Fellowship Grant. This project is a game changer by engaging incarcerated individuals into the political processes that they’ve been barred from since the erection of our current criminal justice system. A system that was established in order to completely bar formerly enslaved Black people from the benefits of American democracy.

As impoverished communities were targeted by executive forces, the downward spiral that begins at arrest effectively works to completely disenfranchise our caged community members from all aspects of society. This is done under the guise of corrections, as if it were a means to Rehabilitate.

This project focuses on dismantling this wall of oppression by attempting to restore the absolutely necessary privilege of citizenship within a democracy, regardless of one’s past offenses. This project aims to restore prisoners’ Right2Vote with an understanding that our criminal justice system can never operate as a rehabilitative or corrective environment without the influence of those who are most affected, the inmates.

Making sure that prisoners’ voices are a part of the conversations about reform is the most important step to accomplishing that goal. The re-enfranchisement of marginalized people’s voices in the political conversation is a critical step to repairing our criminal justice system, ending mass incarceration and restoring the lives of those prisoners and their families who’ve been traumatically impacted by their being pushed into the outskirts of society. The time has ended where those with absolutely no experience with prisons or prisoners make those critical decisions that change the course of millions of lives. 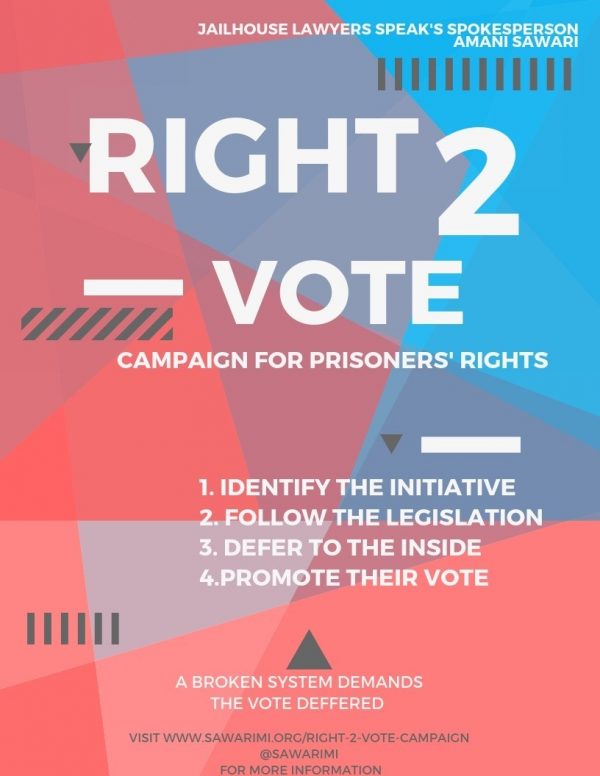