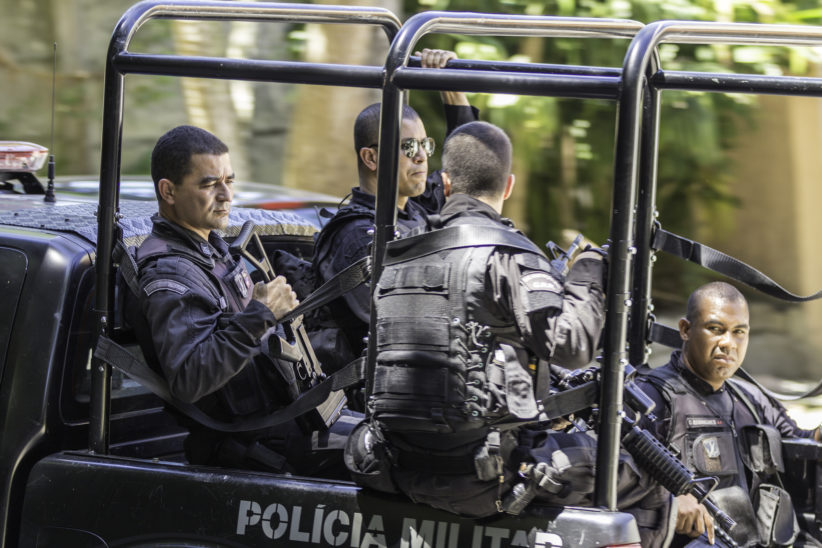 Above Photo: Military Police are used in Rio de Janeiro in an attempt to curb high crime. Photo courtesy of Deposit Photos

Rio’s governor has been criticized for his hard line approach to crime in the state.

Yesterday, on May 6, police snipers from a helicopter fatally shot eight people in a densely populated area of Rio de Janeiro, according to reports from the Brazilian news outlet UOL. The community Facebook page Maré vive posted a photo of what appears to be schoolchildren in the neighborhood of Complexo da Maré running from the attacks.

The killings follow a succession of shootings by police across the state. In the first three months of this year, according to official data reviewed by the Associated Press, Rio de Janeiro police killed 434 citizens. This amount is up from 368 in the same period last year.

This 18 percent increase occurred under the surveillance of Rio de Janeiro Governor Wilson Witzel, an ex-marine and ally of right-wing President Jair Bolsonaro. Witzel was elected into a four-year term that began in January and has maintained a hard line rhetoric against criminals, referring to them as terrorists and vowing to loosen gun laws. In January, the Guardian confirmed that he planned to implement a “shoot to kill” policing policy.

Witzel came under criticism on Saturday, May 4 after he posted a video of himself on Twitter in a helicopter above Angra dos Reis, a gang-controlled seaside town in Rio de Janeiro state, while what appears to be gunshots can be heard in the background. Using snipers from helicopters is a commonly-used tactic for the Rio police, reported the Guardian, and was linked to the death of a 14-year-old boy in the Complexo da Maré in June 2018.

Journalist Luis Nassif wrote in Brazilian newspaper GGN that “nowadays, there is no greater threat to democracy and basic rights than Witzel’s encouragement of police violence.”

In February 2018, then-President Michel Temer signed a decree allowing the military to take control of security in Rio de Janeiro, reported The New York Times. This was the first federal intervention since the country returned to democracy in the 1980s and critics noted that the measure was more likely to be an attempt to increase Temer’s approval ratings than to decrease crime rates.

That year, according to Human Rights Watch, police killings in Rio de Janeiro hit their highest level since 1998, when the government started recording this data.

Crime in Rio de Janeiro is rampant, and former mayor Eduardo Paes explained to El País that although people like to blame it on poverty, it is also a police and judicial issue. Drug use and trafficking are factors that lead to increased crime, he added, but it is the drug traffickers’ desire to control territories that leads to high levels of violence.

“There is cocaine and marijuana in every Western capital,” he said. “But that crazy idea of thinking that traffickers need to dominate an area is one of our peculiarities […].”

Professor and former director of Rio’s penitentiary system, Julita Lemgruber explained to El País that corruption plays a large part in the problem.

“In the first place, the Rio de Janeiro police force has higher levels of violence and corruption compared to their counterparts in the rest of the country,” she said. “I don’t want to generalize, but corruption is rampant. There is not one illegal operation that the police don’t have their hands in.”

Both Human Rights Watch and Amnesty International have published reports emphasizing high levels of impunity within the security forces in Brazil. Many police killings are extrajudicial executions, explained Human Rights Watch, and the Disciplinary Code of the Military Police of Rio de Janeiro leaves police officers with little choice but to comply with orders given by superior officer; the Disciplinary Code does not protect an officer who refuses to obey illegal orders.

The hard line mano dura (iron fist) policies used in Brazil and across the Latin American continent are backed by the majority of the civilian population who, exasperated by the levels of crime in their countries, justify the use of further violence to keep illicit activities in check.

A 2012 United Nations Development Program (PNUD) survey revealed that across Latin America, 87% of those asked somewhat agreed or very much agreed that the best way to fight crime was to implement harsher punishments. It also showed that one-in-three people would support the violation of the rule of law if it was a measure to fight crime.

Bolsonaro and Witzel’s hardline rhetoric on crime played a significant role in the elections for president of Brazil and governor of Rio de Janeiro even though mano dura policies have been proved to have limited effectiveness in reducing crime and violence. But with a lack of resources and receptiveness to alternatives, there’s very little incentive for these policies to change.