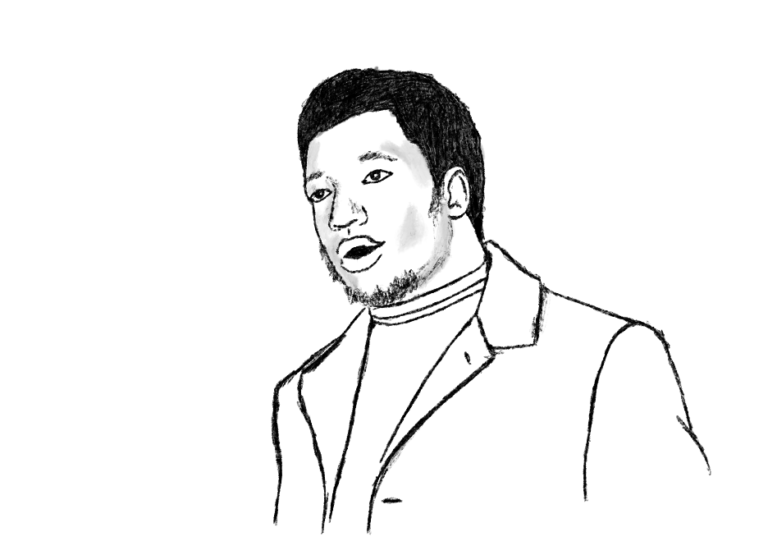 RIP Fred Hampton: A Black Visionary Assassinated By The FBI

For an excellent documentary on the murder of Fred Hampton see this movie by filmmaker Mike Gray.  See The Murder of Fred Hampton. Mike was a close colleague of mine in the drug policy reform movement. One of the projects we worked on together was Common Sense for Drug Policy. This film was an early form of documentary style that has been replicated many times. Mike was also a Hollywood movie writer and director. Mike was in Chicago whe the murder occurred and was able to get footage of Fred Hampton’s bed, with the bullet holes and blood that remained after his death. Amazingly, the police had not closed off the building after they assassinated him.

Mike is best known for his film on nuclear energy, “The China Syndrome,starring Jane Fonda, Jack Lemmon and Michael Douglas a fictional story about a nuclear accident in California. The film was first shown on March 16, 1979 and the Three Mile Island nuclear incident coincidentally occurred on March 28, 1979.

Fifty years ago this week, a squad of Chicago police officers killed Black Panther leaders Fred Hampton and Mark Clark in a pre-dawn raid on the apartment where they were sleeping. In the decades since, a revealing body of evidence has emerged showing that Hampton was the victim of a political assassination, sanctioned at the highest levels of the U.S. government.

The story matters today, but not because the FBI still engages in assassination. The Bureau targets so-called “Black Identity Extremists” on flimsy grounds, but there’s no evidence that it has killed any of them. Indeed, FBI director Christopher Wray says new agents are required to study COINTELPRO precisely to learn what not to do.

What Wray prefers not to tell his employees or the public is that one of his predecessors, J. Edgar Hoover, instigated the murder of a promising African-American political leader, and got away with it. Hampton’s murder was a textbook example of how U.S. law enforcement and intelligence agencies robbed the country of hope and peaceful change and were never held accountable.

No one was ever convicted for Hampton’s murder. To this day, many journalists and historians are unwilling to state that Hoover and other senior U.S. officials countenanced the assassination of domestic foes. Yet compelling circumstantial evidence demonstrates they did exactly that in the case of Fred Hampton.

The story of Hampton’s assassination is not as well-known as that of President Kennedy, Martin Luther King, Robert Kennedy, and Malcolm X. In 2018 a diverse group of citizens formed the Truth and Reconciliation Committee which calls for the re-opening of the investigations of those four famous killings. (I am a member.) The story of Fred Hampton shows why this is necessary.

Hampton’s terrible murder has much in common with the deaths of JFK, MLK, RFK, and Malcolm. It is an unsolved political crime, rife with official malfeasance and wrapped in mealy-mouthed media coverage.

Who Was Fred Hampton?

At age 21 Hampton was an honor student from suburban Chicago and an experienced leader. He got his start as an organizer for the integrationist National Association for the Advancement of Colored People (NAACP). He came to prominence as leader of the Black Panther Party, which scorned the NAACP as too accommodating to white people. At a time when many black militants favored dashikis and leather jackets, Hampton wore a button-down shirt and a pullover.

A self-described “revolutionary,” Hampton envisioned the future of the civil rights movement as a “rainbow coalition” of white, black, brown, yellow, and red people. Jesse Jackson would later adopt the term as the name of his organization and the theme of his ground-breaking presidential campaigns of 1984 and 1988. In short, Hampton was a charismatic leader with a vision of marrying the social gospel of King to the militant nationalism of Malcolm X.

Not coincidentally, Malcolm X, King, and Hampton were assassinated in the span of four years.

Was the FBI Involved?

The raid that killed Hampton was the culmination of the FBI’s notorious Counterintelligence Program. COINTELPRO, as it is known, is usually identified as an FBI program. In fact, COINTELPRO originated with the CIA. When CIA counterintelligence chief James Angleton

launched a secret and illegal program to open the mail of Americans in 1957, he fed the results to Hoover, along with the techniques for “neutralizing” perceived enemies. COINTELPRO was the domestic implementation of standard CIA operating procedures in other countries.

As Hoover’s deputy (and Angleton’s close friend) William Sullivan later explained to Senate investigators, the “rough, rough dirty business” of foreign counterintelligence was “brought home against any organization against which we were targeted.”

(I tell the story of COINTELPRO’s origins in my 2017 biography, The Ghost: The Secret Life of CIA Spymaster James Jesus Angleton. )

Hoover regarded all but the most quiescent of African-American leaders as advocates of “hate.” It was the bizarre projection of a hateful man, not unlike the rhetoric of Hoover’s political progeny—Rush Limbaugh and Donald Trump—who bray that Barack Obama is a “racist.”

The Meaning of ‘Neutralize’

An early COINTELPRO target was Martin Luther King, a religious advocate of non-violence and integration. In 1964 FBI operatives mailed King a letter saying “your end is approaching…. You are finished…. There is but one way out for you.” King’s colleagues understood the letter as an unsubtle invitation to commit suicide.

As the civil rights movement burgeoned in the 1960s, Hoover became more explicit about his techniques of repression. In an August 1967 memo, available on the FBI’s web site, Hoover said the purpose of COINTELPRO was

“to expose, disrupt, misdirect, or otherwise neutralize the activities of Black nationalist, hate-type organizations and groupings, their leadership, spokesman, membership, and supporters.”

When the Black Panther Party (BPP) exploded as popular movement among African-Americans impatient with King’s “turn the other cheek” approach, Hoover sent another memo ordering FBI field offices to submit “imaginative and hard-hitting counterintelligence measures aimed at crippling the BPP.”

The language was an invitation to political violence: imaginative, hard-hitting, crippling. The purpose, the racist director stressed, was to “prevent violence… to pinpoint troublemakers and neutralize them before they exercise their potential for violence.” The goal, he explained, was to prevent the emergence of leader who might “unify and electrify” the black community, as Malcolm X and King aspired to do.

Most white law enforcement officer with guns and badges understood full well what Hoover intended when he used the word “neutralize.” Many white journalists and historians still do not.

In a January 1969 memo, Hoover reiterated that the Panthers were a prime COINTELLPRO target because the group was seeking to improve its image. Not coincidentally, Hampton was then making headlines with his efforts to forge a truce among Chicago’s feuding street gangs and revolutionary activists.

At the time, COINTELPRO operatives regularly insinuated informants and provocateurs into the gangs and the Panthers with the goal of provoking violence between them. This tactic was lethally successful. And anyone who dared to say the FBI engaged in such tactics was sure to be described by the mainstream press as a “conspiracy theorist.”

In the face of fearsome violence, the Panthers refused to surrender (which is one reason why black Hollywood dreamed up a superhero called “Black Panther.”) The FBI ransacked the Panther’s Chicago headquarters in July and October 1969. In November 1969, one of the Panthers was ambushed and killed in a shootout that left two Chicago police officers dead.

By then, the FBI had inserted a paid informant, William O’Neal, into the Panther organization. According to lawyers for Hampton’s family, O’Neal gave a floor plan of the apartment where Hampton lived to his police handler. The plan was passed to a special squad of Chicago police officers working for the Cook County State’s Attorney Office. The office was headed by Edward Hanrahan, a politically ambitious prosecutor. On December 3, 1969 Hanrahan’s office notified Hoover of a plan to raid Hampton’s apartment for illegal weapons.

What Happened on December 4?

The Panthers and the police gave diametrically opposed versions of Hampton’s death. The police said when they had announced themselves they were greeted with a shotgun blast. The Panthers said the cops opened fire first. Hampton died in his bed, next to his pregnant wife. Another Panther leader, Mark Clark, was killed in another room. Four people in the apartment were wounded and three were unharmed.

Chicago authorities then gave O’Neal a $300 bonus and charged the seven survivors with attempted murder of the police officers. At trial, an FBI crime scene examiner testified that the police had fired at least 89 gunshots and the people in the apartment had fired exactly one. It did not come from Hampton’s room.

As public outrage mounted, the U.S. Justice Department began to investigate, and Hanrahan dropped the charges. A state special prosecutor later indicted him and 13 other police officials and officers for obstruction of justice. They were acquitted in 1972.

COINTELPRO was exposed by a band of doughty leftist burglars who broke into an FBI office in Pennsylvania and came away with a trove of secret FBI documents that they shared with reporters. In 1975, the Senate Intelligence Committee on CIA activities, known as the Church Committee, investigated and documented a host of COINTELPRO crimes. FBI director Clarence Kelley issued a formal apology.

But “sorry” didn’t pay any bills for Hampton’s widow, infant son, and the other survivors. The families of the victims filed a $47 million civil lawsuit against Hanrahan and the police officers, which was dismissed and then reinstated. Thirteen years later, in 1982, the city of Chicago, Cook County, and the U.S. Justice Department agreed to pay a $1.85 million settlement, a belated admission that Hampton had been illegally targeted. For the suffering of seven victims and their families, it was a welcome but relatively parsimonious payout.

Hanrahan went on to run for mayor of Chicago twice; he lost badly both times. He died in 2009.

The final report of the Church Committee denounced COINTELPRO but refrained from using the A-word.

“COINTELPRO was more than simply violating the law or the Constitution. In COINTELPRO the Bureau secretly took the law into its own hands, going beyond the collection of intelligence and beyond its law enforcement function to act outside the legal process altogether and to covertly disrupt, discredit and harass groups and individuals.”

This was far too charitable to the FBI. It is true that Fred Hampton and his fellow Panthers were disrupted, discredited, and harassed. It is true that some Black Panthers had, on other occasions, committed crimes or provoked violent encounters with police. Hampton was not one of them. The simple truth, still largely unspeakable in Washington, is that Hampton was assassinated–murdered for political reasons. He was, in a word, “neutralized” at the behest of the leaders of the U.S. government.

To be sure, J. Edgar Hoover and James Angleton did not conspire to kill Fred Hampton in his bed. They merely encouraged and enabled others to do the “rough, rough dirty business” of political repression, at home and abroad. Men of power in America knew how to keep their fingerprints off the resulting crimes.

The loss is painful to contemplate. If he had lived, Fred Hampton would 71 years old, more senior than Barack Obama, Kamala Harris, and Cory Booker, more youthful than Donald Trump, Elizabeth Warren, Bernie Sanders, and Joe Biden. Maybe he would have made revolution. Maybe he would have run for president. Maybe he would have done both. We can only imagine the possibilities that were extinguished that night 50 years ago.