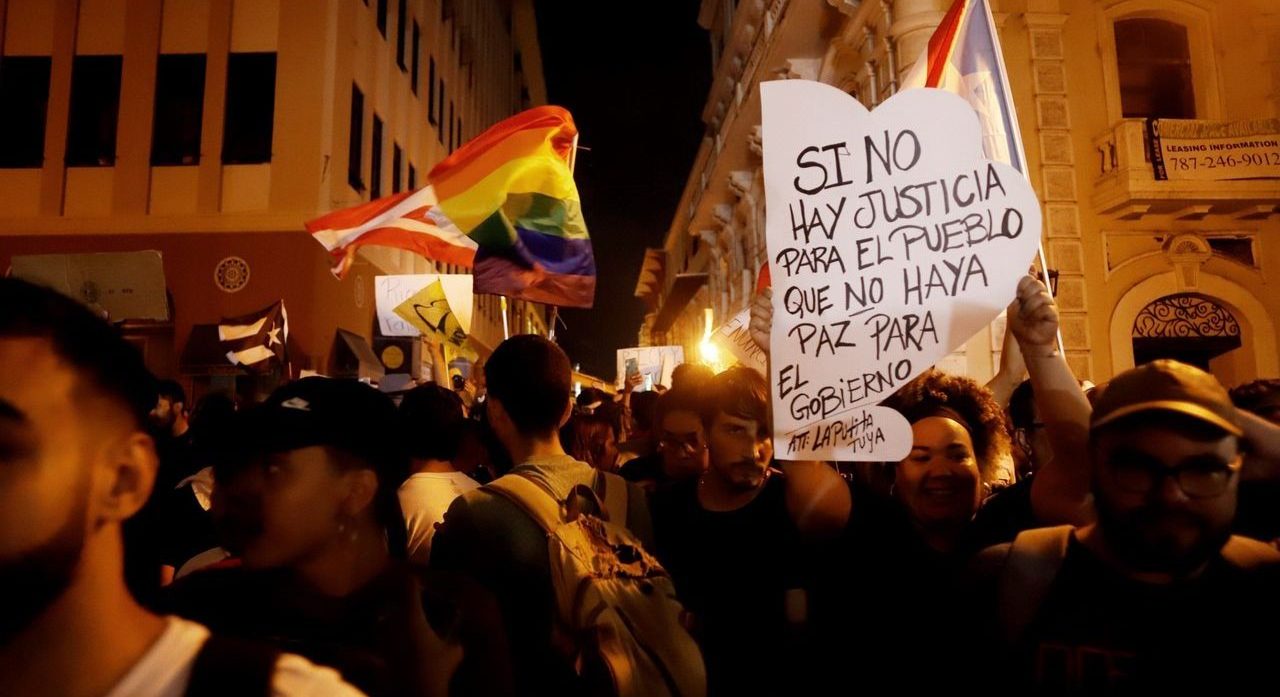 Rising Resistance And Solidarity In The Americas

Above photo: “If there isn’t justice for the people, there won’t be peace for the governor.” Protesters in Old San Juan on Tuesday call for the resignation of Puerto Rico Gov. Ricardo Rosselló, who has vowed to remain in office. Thais Llorca/EFE/Zuma Press.

This weekend marks the 40th anniversary of the Sandinista Revolution in Nicaragua. Hundreds of thousands of people celebrated in the streets of Managua Friday night. This past week, mass protests erupted in Puerto Rico over long term corruption and subversion of democracy. A general strike is planned for Monday.

This week is the 25th Sao Paulo Forum, a meeting of left political parties and social movements, in Caracas, Venezuela. We participated in a Sao Paulo Forum of Washington, DC in preparation for the upcoming meeting. A delegation of Venezuelan Embassy Protectors is traveling to Caracas to participate in it.

Resisting US Coup Attempts and Building the Good Life

Forty years ago, the Sandinista Front for National Liberation, named after Augusto Sandino, a revolutionary in the 1920s and 30s, ousted the US-backed dictator, Anastasia Somoza, from the country. This day, now called the National Day of Happiness, is celebrated every year. Check out The Grayzone Project’s Twitter feed for videos of the celebrations.

Under the leadership of the Junta of National Reconstruction, which included the future leader and president Daniel Ortega, Nicaraguans took action to provide healthcare, education, eradicate illiteracy, build roads and energy infrastructure, provide land and develop food sovereignty. They greatly reduced both economic and gender inequality.

Nicaraguans enjoyed a stable life until an attempted coup to remove President Ortega, backed by the United States, in mid-2018. Similar to pro-coup protests in Venezuela, there were blockades built by violent coup-supporters who attacked and brutally killed 198 police officers, Sandinistas and bystanders. That coup attempt was stopped despite the media lies designed to confuse the public. A year later, the truth continues to emerge but peace prevails once again. An excellent book, Live From Nicaragua: Uprising or a Coup, A Reader, breaks through the false narratives of the attempted coup and gives information helpful to understanding the situation in Nicaragua.

A delegation from Veterans for Peace is visiting Nicaragua for the anniversary. We look forward to their reports. We attended a celebration at the Nicaraguan Embassy in Washington, DC hosted by Ambassador Francisco Campbell. He described current efforts in Nicaragua to bring truth and reconciliation to reunite a country divided by US interference and the coup attempt.

Nicaragua is a member of the United States’ “Troika of Tyranny,” which includes Cuba and Venezuela. These are three Latin American countries that have broken from US domination and continue to be punished for expressing their self-determination.

Cuba has been experiencing a blockade since 1958, which has driven the country to develop a resistance economy without reliance on foreign goods. Although the blockades have hurt their economy and restricted access to necessities, such as medications, Cubans have better health outcomes than people in the United States due to their well-designed universal healthcare system.

Venezuela continues to resist the current US-led coup attempt, even though the United States is taking it to new extremes. This past week, USAID, a regime change institution, announced the Trump administration is going to use almost $42 million designated for aid to Central America to pay for salaries and supplies for the right-wing opposition led by the self-declared president, Juan Guaido. The corruption of Guaido’s people continues to be exposed. Two more members of Guaido’s team were arrested for trying to sell stolen weapons.

Will Mexico be next? Arturo Sanchez Jimenez outlines what he sees as the early stages of a right-wing coup targeting the new president, AMLO.

Join the People’s Mobilization to Stop the US War Machine and Save the Planet this September in New York City. Learn more here.

Resistance is Growing in Latin America

Ecuador was making great strides in meeting its population’s needs under President Rafael Correa, but that is being reversed by the current president, Lenin Moreno. Moreno is known worldwide for ending Julian Assange’s asylum and allowing police into the London Embassy to arrest him, but his actions against the Ecuadorian peoples has been similarly harsh. Moreno campaigned on continuing Correa’s programs but has done the opposite. In this interview, Andres Arauz, a member of Correa’s economic team, explains Ecuador’s neoliberal turn under Moreno.

Ecuadorians launched a five-day general strike last Monday to protest “handing over Ecuador to US imperialism.” Among their complaints were Ecuador imposing austerity after receiving a loan from the International Monetary Fund, a US military base proposed in the Galapagos Islands and the imprisonment of Julian Assange.

Mass protests have also erupted in Puerto Rico. Hundreds of thousands of people, many who have never protested before, are taking the streets in San Juan and throughout Puerto Rico. They are facing police repression with tear gas and pepper spray. On Monday, they are holding a general strike.

The protests began when hundreds of pages of chat logs between Governor Ricardo Rosello and other officials were released. They contained derogatory statements and disrespect for the thousands who died after Hurricane Maria. Protesters are calling for the Governor to resign. Other government officials included in the chats have already resigned.

Although the chats were the proverbial “last straw,” according to Miguel Diaz-Cruz, a Puerto Rican doctoral student, the protests are the result of “five centuries of uninterrupted imperialism, free-market disaster capitalism, an imposed dictatorial fiscal control board controlled by the very same people that bankrupted the island, and a storm of the century which was fueled by climate change.”

We spoke with Puerto Rican lawyer, Natasha Bannan, who has participated in the protests, on Clearing the FOG. The episode will be published on Monday. She goes into depth on the problems Puerto Ricans are facing, describes what it will take to start the process of resolving them and explains how activists can be supportive.

Why Resistance and Solidarity Matter to Activists in the United States

People in the United States often refer to themselves as “Americans.” Sadly, this is not done in the spirit that all people in the Americas, South, Central and North, are Americans. Instead, we in the US are taught to see the other Americans as different from us. This is part of US hegemony and the Monroe Doctrine that views Latin America as “our backyard.” It’s why people in the US, USians, accept unilateral coercive economic measures, exploitative trade deals and violent coups that harm other Americans.

All Americans are victims of US actions that destabilize and exploit American territories. We probably don’t think about it that way very much, but what hurts our neighbors hurts us. Blockades mean that USians can’t benefit from medical breakthroughs in Cuba or inexpensive oil programs from Venezuela. Exploitative trade deals mean US jobs are moved South of the border to Mexico, Honduras, Haiti and other countries where wages are lower and there are fewer worker protections.

In the United States, we are also victims of the US Empire. The Empire Economy consumes over 60% of federal discretionary spending on the military. This means less money for necessary programs to provide healthcare, education, housing, and food. The massive US weapons and military industry mean new “customers” must always be found for the products they make, which fuels wars abroad that add to global insecurity and destruction and militarization of our communities at home where the “others” are black and brown people, the poor and homeless. The US military is the largest institutional user of fossil fuels and a major polluter, driving the climate crisis and environmental contamination.

If we are to overcome the US Empire, it will take all of us together. This is one reason why solidarity between all Americans is essential. We in the United States have much to learn from our American brothers and sisters who have been targets of imperialism for centuries. We also have much to learn about the ways countries like Cuba, Nicaragua and Venezuela are working to reduce inequality, meet basic needs and provide a better quality of life for their peoples.

Events like the Sao Paulo Forum are opportunities to come together, get to know and learn from each other. A delegation from the Embassy Protective Collective will attend the Sao Paulo Forum this week in Venezuela. We cannot attend because of our ongoing prosecution by the Trump administration for staying in the Venezuelan Embassy in Washington, DC, but we are sending Vanessa Beck, a representative from Popular Resistance who will bring a message of solidarity. Vanessa is also a leader of Black Alliance for Peace.

We also attended the Sao Paulo Forum in Washington, DC where we agreed to ten resolutions of solidarity that will be brought to the Forum in Venezuela. At the DC Forum, the Embassy Protection Collective was presented with a powerful painting by the indigenous Salvadoran artist, William Berry. Dan Kovalik donated copies of his new book, “The Plot to Overthrow Venezuela,” which were sold at the forum to raise funds for the Embassy Protectors Defense Committee.

Learn more about the Embassy Protector sDefense Committee at DefendEmbassyProtectors.org and how you can participate to support the collective’s defense against malicious US prosecution.

Resistance is rising. We can join together in that resistance with acts of solidarity to stop the US war machine and create a new world.