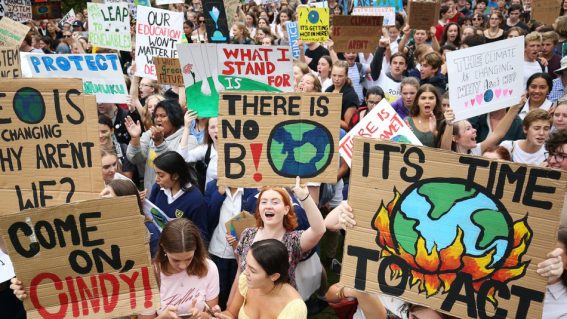 This Fall, Let’s Throw Down For Climate Justice

Time is running out. The climate crisis is at our doorstep. Communities around the world are already being battered by the earliest effects of the changing climate–superstorms, floods, wildfires and droughts. And still not moving any closer to actualizing the dramatic transformation of our energy systems and economy that we all know are needed to mitigate the worst effects of climate change.

The situation is bleak, but we are hopeful.

Around the world, people are stepping up to take bold direct action to confront the climate crisis. Hundreds of thousands of school students are organizing climate strikes, Indigenous communities are continuing to resist the destruction of their historic lands, new movements like Extinction Rebellion are organizing bold and dynamic actions across the planet, and our comrades from Ende Gelande in Germany recently visited to teach us how they mobilized massive direct actions confronting the fossil fuel industry.

We’re also hearing from a lot of groups who are making big plans to throw down hard for climate justice this fall. Starting on September 20, the students who have been organizing the weekly climate strikes are launching a major strike and week of actions. Then starting on September 27th, Earth Strike is calling for a general strike demanding immediate climate action from governments and corporations worldwide.  WeRise2020, a widespread network of climate action groups across Europe is planning on mobilizing alongside EarthStrike starting on September 27th for four to six weeks of escalated actions before pausing to regroup for another wave of action. We’re also hearing that the folks at Extinction Rebellion are working on plans for something big this fall and the UN Climate Action Summit in New York City starting on September 23 offers an obvious venue for confronting political leaders for their failure to take meaningful action to address the climate crisis.

It’s still too early to tell how this is all going to play out but we’re excited to see the energy and activity and we’re ready to throw down. Nobody can afford to sit on the sidelines–the stakes are too high.

We know that the scope and the urgency of the climate crisis demands bold action and we’re inspired to see so many people–and so many new voices–thinking big. We are excited to see people thinking about mobilizing to create serious disruption to the systems that are perpetuating our reliance on fossil fuels and to see people talking about organizing protracted surges of resistance, not just self-contained actions. We’re hopeful that our movements will use this wave of energy to directly confront the root causes of the climate crisis–capitalism, colonialism, and white supremacy–and to reject market-driven false solutions.

In the coming weeks and months we’ll be keeping our ears to the ground to find ways that we can plug in. We’ll be checking in with old friends and hopefully hearing from new friends about what folks are planning and where we can show up in the best ways. We’ll be sharing some of our ideas about how we think our movements can make fall 2019 a turning point in the movement for climate justice and we’ll be listening carefully to learn from the other new ideas that are emerging.

Time is running out and the stakes couldn’t be higher. Let’s keep this conversation going, let’s work together to build momentum, and let’s get ready to throw down hard this fall.